His confidence mainly comes from the notion that he has the support of many voters, which may be true, for now. 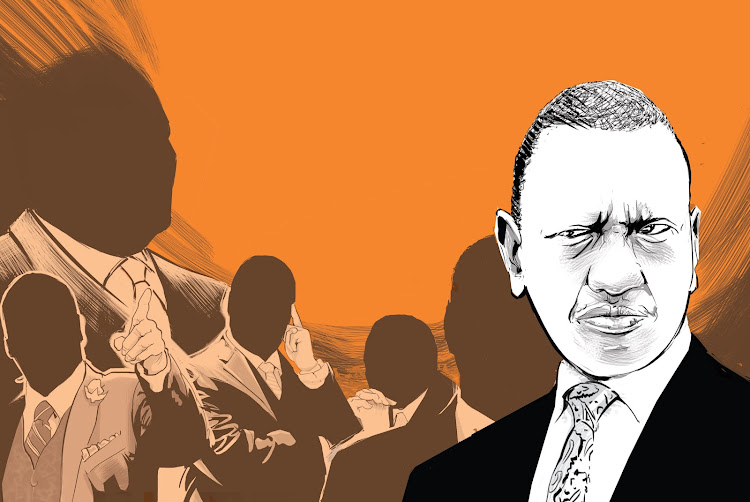 The debate about deep state is trending in Kenya, after Deputy President William Ruto declared he is not scared of it. Senior politicians, including former Prime Minister Raila Odinga, have joined in the debate, telling off Ruto. However, even though the deep state determines who becomes president, its meaning remains elusive.

Many people associate deep state with a shadow or parallel system of government that is made up of official and non-official public officers, as well as established business people. In Kenya, the names of senior government officials and prominent tycoons, especially from Mt Kenya, have been featured as members of the deep state or what some call ‘the system’. Generally, deep state refers to government agencies and individuals who are responsible for making and enforcing critical government policies and regulations.

In the Kenyan context, members of deep state can be grouped into two major categories. The first comprises heads of government agencies that are entrusted with the responsibility of dealing with security and corruption. Now you can guess why Ruto and his allies are always in a fight with security bosses.

Security apparatus is sometimes known as the administrative deep state because it holds tyrannical power over other government agencies and ordinary citizens. The presidency often uses security apparatus to accomplish its political goals and objectives. Raila might have used this category to insinuate that Ruto is part of the deep state because the DP’s office falls under the presidency.

The second category involves business tycoons and highly influential lobbyists. Many business tycoons have repeatedly been named as members of deep state Kenya. Mt Kenya Mafia is probably the most popular group of business tycoons linked to ‘the system’. This category is often made up of faceless and uncountable bureaucrats who influence Kenyan politics, including policies and laws passed by Parliament.

But Bruce Bueno and Alastair Smith, who came up with the Selectorate Theory, would have advised Ruto never to base his hopes on voters because they are interchangeable, and maybe DP learnt this in the Kibra by-election.

Ruto’s utterances clearly indicate that he has declared war against the deep state. Ruto’s confidence mainly comes from the notion that he has the support of many voters, which may be true, for now.

But Bruce Bueno and Alastair Smith, who came up with the Selectorate Theory, would have advised Ruto never to base his hopes on voters because they are interchangeable, and maybe DP learnt this in the Kibra by-election.

Based on the Selectorate Theory, there are three groups of people who decide election outcomes. The first group is nominal selectorate or interchangeables, which is the main source of Ruto’s confidence. This group comprises anybody who has the legal right to vote. The group is called interchangeables because it can easily be swayed from one political side to another within a short period of time.

The second group is real electorates or influentials who actually elect leaders. In the US, for instance, it can be members of the Electoral College.

The third group is called the winning coalition or essentials. This is the group that we call ‘deep state’ because the support of essentials is critical for a leader’s ascent to, and hold on, power.  It is the support of the essentials that often translate into real victory.

This explains why Raila is yet to become president despite his massive national support. He probably won the 2007 election but failed to enter State House because the system was against him then. Will Ruto be an exception?

Ruto may have made his worst mistake by daring the deep state, but it is not yet too late for him to correct this. My unsolicited advice to the DP is to try to divide the deep state, even though this is a tall order as it appears the die has been cast.

Says he is not scared of the "deep state" and people will exercise their will freely.
News
7 months ago

Over the years, the claim has been that 'deep state' is domiciled in the Internal Security Ministries.
News
7 months ago

"We are not in government as ODM. So we don’t know about this deep State" - Raila.
News
7 months ago

The Deep State has spoken