From student leader to MCA 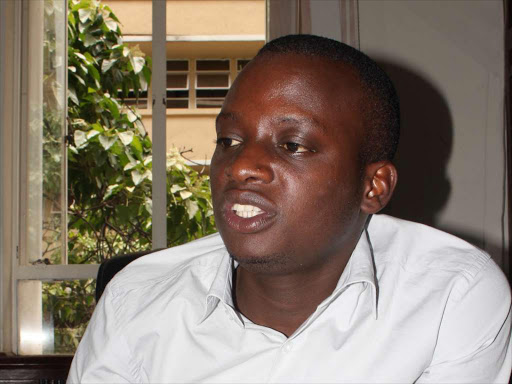 Kilimani MCA Moses Ogeto during an interview on Monday,April 11 at the city hall. PHOTO/COLLINS KWEYU

It is not common to have a 25-year-old occupying an elective office in Kenya. It is even more difficult when the office in question is in the capital, Nairobi, and in a middle class neighbourhood. But Moses Ogeto defied this to be elected the Member of the County Assembly representing Kilimani Ward in the Nairobi County Assembly.

Kilimani is no ordinary neighbourhood. It is home to the rich, the propertied class who by natural instincts would resist the very idea of being led by a student. “Kilimani is not just for the rich.  There are also people of low income who deserve representation,” Ogeto says, noting he has constructed modern kiosks and car-wash berths for poor constituents. But to many, Ogeto is a square peg in a round hole.

The idea of voters as people who have made it lining up to vote for a candidate who hardly symbolizes their interest just does not add up. “ The middle class in Kenya never votes. In the few cases where it does, they travel back to their upcountry homes to cast ballots,” he explains, hinting at what may have caused him to win the seat at the first attempt.

“ The middle class did not vote for me. But leadership is a calling.  ere are many people with lots of money but who have never gotten into positions of leadership, even though they want to.” Before joining national politics, Ogeto was active in student politics at the University of Nairobi, where he graduated with a Bachelor of Commerce degree in 2014.

He was first elected to Sonu in 2011, as a congressman, the student leaders in charge of hostels, and later was elected a faculty representative in 2012, before he left to join politics. He capitalised on this position to lay the ground for his future political career nationally.

The advantage I had was that all the University of Nairobi hostels are located within the Ward,” says Ogeto, who admits to having been mentored by Babu Owino, the everlasting Sonu chairman.  The University of Nairobi was recently closed indefinitely following riots after students accused Babu of rigging elections. But Ogeto defends Babu from blame. “It’s politicians who want to disturb universities who sponsored students to weaken Babu,” he says, even though he refuses to name even one politician.

It pays to start early on the road to leadership

2010: University of Nairobi and graduated in 2014 with a Bachelor of Commerce, Accounting option

2011: Was elected as a student leader in charge of hostels at the University of Nairobi

2014: “I was in my Ward the other day and I asked them why the office was so dirty and they said that they had not received brooms. Why?  The answer was “it is in the procurement process,” contributing to a motion for the decentralization of procurement of services to the smaller units of the county.

2015: “I would wish to direct the Chairperson (of the Roads committee) to report immediately the House resumes after recess.  That road is in a mess and that is where you pass, Mr Speaker.  There are a lot of potholes because of ongoing construction. We want to get clear guidelines, because there is no way a road can be made today then tomorrow a developer is destroying the same road,” demanding the county Executive committee repair roads in the Kilimani area.

2016: “In Kilimani, you find many people doing business but if you look at the structures which they operate in, they are in terrible condition and not good for their health. We should ensure that the way this Motion has been structured should it is implemented fully.  This will ensure the environment is conducive for our people to conduct business.” Supporting the Motion for the construction of modern kiosks.

Post a comment
WATCH: The latest videos from the Star
by IBRAHIM ORUKO
Columnists
19 April 2016 - 05:00
Read The E-Paper