It’s the West’s Agenda To Control Our Population 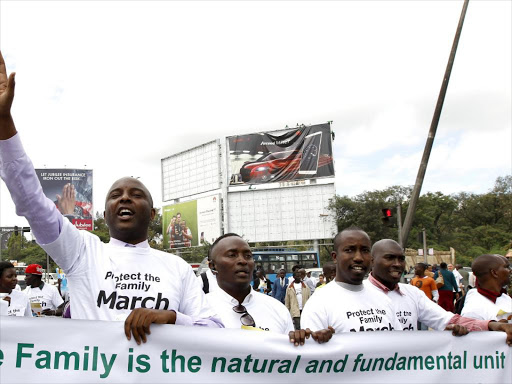 Legislator Irungu Kiharu leads the anti-gay caucus as they chant slogans against the lesbian, gay, bisexual, and transgender (LGBT) community during a march along the streets in Kenya's capital Nairobi July 6, 2015. Photo/REUTERS

Gay activists in Kenya have not made any strides in their campaigns to homosexualise Kenyan and African people, they should thus stop lying to their financiers by presenting skewed statistics and reports. While it is true that a few highly westernised people who have been masquerading as homosexuals have managed to make one or two media and court appearances, it is untrue to claim that in Kenya or any of 53 African countries (minus South Africa), people have successfully been “homosexualised.”

Most Kenyans believe in families and see homosexuality as the greatest threat to functional family units.  e Kenyan constitution already allows human rights for everyone including any seemingly ‘special group’, so it is extremely selfish for them to demand gay rights. We are a God-fearing country and the Bible is clear that God created a man and a woman.  Those caught practising sodomy in the Bible were punished by God and it is unfortunate now that we are having the same sinners demanding special rights.

They try to be a bit liberal and argue on the basis of genetics, but renowned doctors have refuted this claim and argued that homosexuality is not genetic. It is a learned behaviour which comes through socialisation and interaction. In other cases some people do it to be paid. It is true that some Western countries have vowed to make sure Africa embraces homosexuality.

I sought the opinion of my 97-year old granny, who was surprised to learn homosexuality now exists in Africa. She said marriage has never been between two men or two women since time immemorial. It was an abomination to even think of it in her early years.

“ These people must have been imported the other day because I have never come across them before.” We are under immense pressure to create liberal laws that allow same-sex unions and abortion.  The agenda is to control the population because a big one is a threat to the West in many respects. Homosexuality can be a great tool to control population growth as it is the only sure way to have a ‘baby-less’ union.

Every child needs a father and a mother, not two daddies or two mums. God created each gender uniquely and none can play the role of the other, no matter how hard they try. Besides dysfunctional couples, homosexuality exposes those that practice it to health and mental issues. Kenyans and Africans in general are very gracious though.

They pray a lot for offenders, and the tonnes of prayers being directed to this item in particular are massive to a level that I am sure homosexual acceptability will not see the light of day. We love even the few sold out souls and will pray that they find their way back to normalcy. We will also very soon identify the Western sponsors of these campaigns and shame them. We know Africans are never homosexuals; the west is trying too hard.

Ann Kioko is the President, African Organisation for Families