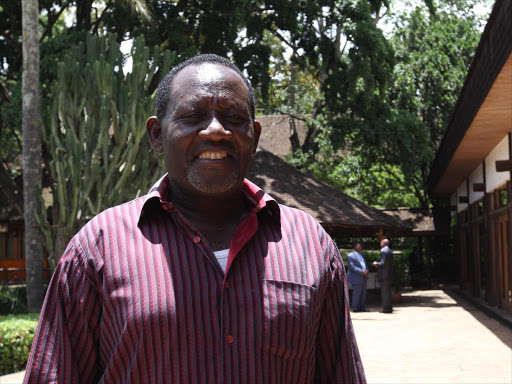 Probably because of his outspoken style, Mpuru Aburi, the Tigania East MP, stands as one of the most recognizable first term MPs in the 11th parliament.

But it has never been an easy political journey for a man who variously describes himself as “Raila wa Meru” or “Raila Mdogo” and insists that Jaramogi Oginga Odinga was his father.

A month ago, Meru Senator Kiraitu Murungi said of the rabble rousing politician: “The first time I met him, I thought he was a Luo because he looked like one.

But I am proud of him because he is a champion.

He has been tear-gassed at rallies during the one-party era.”

The 53-year old politician has always identified with the Odingas going as far back as 1992 when he was elected councillor in Meru Municipality on Ford Kenya ticket.

In 1997 he contested and lost the Tigania East Parliamentary seat on the National Development Party ticket, a party Raila Odinga had formed a year earlier.

The same would happen in 2002 and 2007 when he once again lost in his attempt to win the seat on Narc and ODM tickets.

“Jaramogi Oginga Odinga told me I was his son,” he explains on his close relationship with the Odingas.

“ It is true that only a mother knows the father of her child but I could not doubt a wise man as Jaramogi.”

“Mzee told me to always speak my mind without fear when I see my people being impoverished by anybody, including the government,” says Aburi.

The late Jaramogi invited him to his home in Bondo in 1992.

He was in the company of Raila, during the meeting in which the Mzee blessed by giving him a hat and a walking stick.

“He also gave me the old model of Mercedes Benz 280SE which I still retain to this day.”

But the MP, who finally was elected in Tigania on Raila-led ODM ticket, has of late been tilting towards the ruling coalition.

During the President’s recent incursion into Meru, Mpuru told a rally that he will ditch ODM for Jubilee

“That is politics. By making the declaration I was in no way suggesting that Raila is my enemy. The former Prime Minister is a pillar of my life without whom I would be nothing,” he says, showering unstinting praise to the man he prefers to describe “my big brother”.

When former President Daniel arap Moi, had him arrested him in 1992 it was Raila who came to his rescue.

Mpuru says he will defend his Tigania East seat in 2017 “so as to serve my people who have been faithful to me.”

1997: Contested the Tigania East on an NDP ticket and lost.

2002: Contested the Tigania East on Kanu ticket. He lost to Peter Munya of Narc by 100 votes.

2007: Contested the seat once more on ODM ticket and lost to Munya again.

2013: “To bring down corruption in the management of CDFs, MPs must be paid well. We want to enjoy what the 10th parliament enjoyed,” said Aburi, commenting on the decision by the Salaries Commission to slash MPs’ pay package.

2014: “I don’t follow people. People follow me. Politically speaking, I am ‘consistently consistent’” says Aburi, during an interview with a local newspaper.

2015: “President Uhuru Kenyatta must be feeling deserted at his hour of need. Jubilee troops from his Central Kenya backyard have betrayed him. They haven’t, as would be expected of them, demonstrated undivided loyalty to him, at least in the raging saga of Devolution Cabinet Secretary Anne Waiguru.”

2016: “I have not decided on which party I will contest. But Ruto is my friend and all indications are that I may use his political vehicle.”

2016: “Ruto is a friend I like, and claims by bloggers that I have received favours to join jubilee are false. I am not the type to be bought. No one can buy me. I am a politician of my own standing.”