US seeks to upstage China in long overdue Africa summit

Africa may not turn down the offers being bandied by the superpower, but it should take each with a pinch of salt.

•In August, the US released a new strategy document for sub-Saharan Africa which, among other issues, addressed the threats posed by China and Russia. 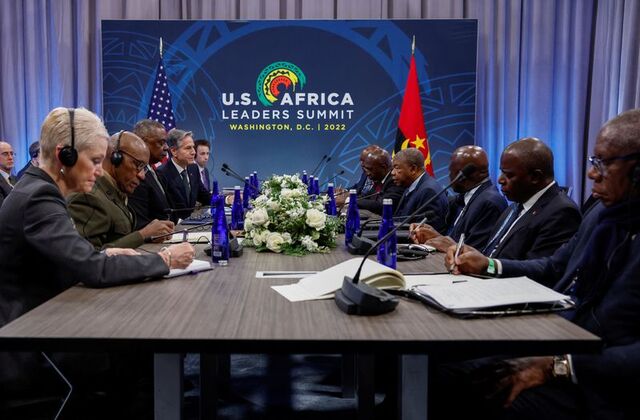 US Secretary of State Antony Blinken and US Defense Secretary Lloyd Austin meet with some of the African leaders during the US-Africa Leaders Summit 2022 in Washington DC, on December 13, 2022.
Image: REUTERS

In an apparent response to the first China-Arab States Summit and the China-Gulf Cooperation Council Summit currently taking place in Riyadh, Saudi Arabia, the US will host 49 African presidents and the African Union (AU) for the US-Africa Leaders Summit in Washington from December 13 to 15.

This comes several years after President Barrack Obama hosted the first US-Africa summit in August 2014. This was seen as window dressing by the first US black president to acknowledge his Kenyan heritage. Since then, there has been no progress on what Obama termed as “three broad areas" – expanding trade that creates jobs; strengthening governance; and deepening security cooperation against common threats.

Opinion leaders have intimated that during the upcoming summit, the US seeks to engage Africa on climate and Ukraine, and to counter China’s influence. But there seems to be an unexplained urgency in hosting the African leaders, with US President Joe Biden already expressing support for the African Union (AU) in joining the Group of 20 (G20). The G20 is the premier multilateral forum that brings together the world’s strongest economies, including the European Union.

This is a new one. South Africa is the only AU G20 member out of the 55-member states continental body. It is unlikely that the US has just realized Africa’s potential after all these years. Which boils down to only one plausible argument. That the superpower’s aggressive overtures to Africa is one of the stratagems it is using to upstage China on the global scene.

A recent statement released by Judd Devermont, the White House National Security Council’s senior director for African Affairs, gives an erroneous impression that Africa has been lobbying incessantly for inclusion into the G20. This is not documented in any official communication from the AU, neither has any African president openly expressed that the continent has had such hopes or ambitions.

What is true, however, Devermont noted that there is dire need for “more African voices in international conversations that concern the global economy, democracy and governance, climate change, health, and security.” Indeed, an article published in the Washington Post by Yasmeen Abutaleb on December 9 aptly captures the foregoing. “African leaders have for years expressed frustration at being left out of discussions on global affairs and crises that affect them, from the coronavirus to food security, saying they often feel like bystanders while Western countries drive most international bodies.”

In August, the US released a new strategy document for sub-Saharan Africa which, among other issues, addressed the threats posed by China and Russia. But the document fails to state categorically the kind of existential threats these two leading developing economies pose to the world. Which leaves one to surmise that the US is fighting desperately for the reinstatement of its hegemony which has been dented by both internal and external forces.

Questions are being raised why the US is not forming a direct partnership with African countries like the continent has done with China under the Forum on China-Africa Cooperation (FOCAC).  Established in 2000 as a multilateral partnership between China and the 53 nations under the AU, FOCAC has now evolved into an institutionalised platform with a clear operating architecture.

PACESETTER: Chinese President Xi Jinping and foreign leaders attending the Beijing Summit of the Forum on China-Africa Cooperation (FOCAC) head for the venue of the summit's opening ceremony at the Great Hall of the People in Beijing, capital of China, Sept. 3, 2018.
Image: COURTESY

FOCAC’s areas of focus include economy and trade, cultural exchanges, peace and security. Through this forum, Africa has experienced massive social and economic transformations, particularly on trade, infrastructure and technology. The US is a Johnny-come-lately in Africa’s development. African countries know the US more for aid, and interference by the superpower in their internal affairs.

The US has been accused of instigating regime changes in the continent to replace leaders not playing by its rules, with the ones that are easily manipulated. Several independent-minded leaders were taken out with the tacit support of the US Government or Western intelligence. The post-independence period in Africa is a dark chapter that the continent will forgive but never forget.

Cooperation in fighting the COVID-19 pandemic was yet another test that the US failed miserably. While the US was condemned by the Global South for vaccine apartheid, China was hailed for sending massive amounts of resources to fight the pandemic in the developing world, particularly in Africa.

Well, this latest attempt to pull Africa out of China’s sphere of close friendship and cooperation will fail miserably. Observers say that China-Africa cooperation is moving in the right direction and has made solid efforts in helping Africa achieve sustainable development. FOCAC is now more deeply rooted than any other uni-multilateral cooperation platform in the continent.

Wisdom dictates that when the deal is too good, think twice. Africa has been bitten once before. It would now be foolhardy for Africa’s leaders to allow themselves to be taken down the garden path by the US again after all the failed promises. The continent may not turn down the offers being bandied by the superpower, but it should take each with a pinch of salt.

Post a comment
WATCH: The latest videos from the Star
by STEPHEN NDEGWA
Opinion
14 December 2022 - 15:44
Read The E-Paper