DIANA ODHIAMBO: Climate change is not neutral to gender

In the past, women have been ignored in mainstream climate policy.

•Some of the most important benefits entail advances towards gender equality and women’s empowerment and leadership. 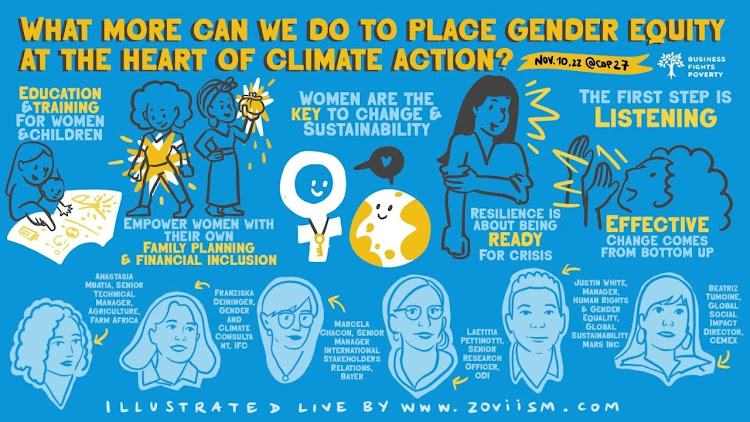 But it does not affect everyone equally.

Climate change is far from gender-neutral.

“Gender inequality coupled with climate and environment crises is the greatest sustainable development challenge of the present time.”

Women who are poor and marginalized in low-paying jobs, for instance, have fewer resources to cope with drought, flooding and other consequences of climate shifts.

Women are more vulnerable to food insecurity, with the global gender gap growing from 6-10 per cent from 2019-2020

Massive economic and social benefits can come from climate action.

Some of the most important benefits entail advances towards gender equality and women’s empowerment and leadership.

Both climate mitigation and adaptation measures can be crafted to accelerate social inclusion and gender equality and from there, progress across the Sustainable Development Goals.

Energy poverty forces people to turn to polluting fuels for cooking and heating, which in turn kills 3.8 million people a year, mostly women and girls, through indoor air pollution.

Solving the climate crisis, a just transition, and achieving the SDGs – none of these is possible without gender equality.

In the past, women have been ignored in mainstream climate policy or viewed mainly through a lens of vulnerability.

Ensuring that women and other marginalized groups participate in decision-making not only upholds a fundamental human right but can frame more responsive and effective climate policies.

It recognizes that women are powerful agents of change and sources of solutions.

At the COP 27 side event by “Business Fights Poverty” the discussion was clear, that not only are women agents of change but also that women are at the forefront, championing the fight against climate change.

Here are some key insights worth articulating, as we all play a part in ending climate change.

Women are disproportionately impacted by climate change, but they are not just victims - they are agents of change.

Women are often already at a disadvantage in a world managed predominantly by men, so it’s no surprise that speakers pointed out the many ways in which women bear the brunt of climate breakdown.

“Women have to face different inequalities throughout the world.”

These inequalities include a great share of unpaid labour and family care, lack of access to land and finances, fewer opportunities for education and skills development, which can limit employment, and cultural stigmas around gender norms and roles (just to name a few).

“They’re overexposed to various impacts, they are more dependent on natural resources, and tend to be overrepresented in household activities,” said Franziska Deininger, Gender and Climate Consultant at the IFC.

“So we really see just this enhanced fragility that women, but not just women, other disadvantaged groups, are facing.”

Despite this, women are generally not passive players in the battle for the planet and their own futures.

Given the right tools and resources— particularly access to education and skills development—women will, and do, drive progress.

“Women are the key to sustainable and resilient communities. If we educate women, if we help them and enable them, they will make more sustainable decisions for the future.”

Fortunately, numerous interventions already exist to get to the heart of the intersections between gender and climate.

She went on to pose the questions that framed the conversation: How can women be part of climate action equally, and how can climate action support greater gender equality?

To effectively address the issues at the intersections of climate and gender, climate action needs to have an equal representation (at least) of women and men.

One example that was mentioned was the astounding lack of lead women negotiators at COP27— less than 30%.

“Women are indeed changemakers when it comes to climate change,” expressed Franziska.

“And this is not about adding to their burden of responsibility, but about elevating women in situations of decision making. We’re actually seeing that women in leadership leads to reduced carbon emissions, better climate governance, and more climate innovation.”

Yet many barriers exist for women to reach those positions of power.

Laetitia pointed out three main challenges getting in the way: access and control over resources such as land and finance, capabilities and capacity building and physical and psychological safety.

Designing climate interventions with gender quotas is one way to begin breaking down these barriers and engage women in climate action.

Anastasia Mbatia, Senior Technical Manager, Agriculture at Farm Africa gave the example of how Farm Africa looks at gender in all of their programmes and makes sure that at least 30% of the people they engage with are women, particularly when it comes to training.

“Training is one of the largest constraints that makes farmers not adopt new practices,” she said.

Thoughtful programme design that is responsive to women’s needs and lifestyles is also one way to ensure participation.

“We look at a woman’s clock from the morning—what time does she wake up and what kind of work is that this woman would be doing,” shared Anastasia.

“And then set the times [of training] to be a time that the woman is likely to be available.”

Look for the ways that climate action can provide opportunities to increase women’s equality.

Participants agreed that finance and policy are key areas to leverage climate action.

Franziska Deininger, Gender and Climate Consultant, for improved gender outcomes, but that interventions need to break down the barriers to access that women already experience.

“[Let’s think about] how women can be included and look at strategies which do not [require] heavy collateral for women to be able to be engaged in this,” said Anastasia.

She also suggested adjusting policy structures within agriculture to be more sensitive to women’s needs, as this will then enable more women to participate.

“[Through listening], we’re seeing connections between the risk of deforestation and investments that we can make in women’s agency, incomes, and mobility,” said Justin.

Carbon markets is one evolving finance area where the interplay of gender and climate is still in its infancy.

“The voluntary carbon markets today do not have a sufficient supply of credits with meaningful co-benefits [for women],” said Justin.

“How can we have a conversation about what a good carbon credit looks like, especially one that’s gender transformative, or at a minimum, gender responsive?” Involving men and boys in climate-gender conversations is a critical part of any gender sensitive climate intervention and gets to the core of gender inequality.

“We ensure that both men and women are trained on gender so that they can be able to appreciate the key role that women contribute in agriculture,” Anastasia shared.

Workshop participants also drove home this point. “Engage men so that you can reconstruct the patriarchal system that might be inhibiting women’s involvement,” expressed Kelvin Muthui, Programme Coordinator at Caritas Kitui & IIED

As stated by Franziska Deininger, World Bank Group, IFC: "Women are indeed change makers when it comes to climate change. And this is not adding to their burden of responsibility, but it's really about elevating women in situations of leadership & decision making to make sure that their voices are heard."