The narrative cements the perception advanced by his political opponents during the campaigns. 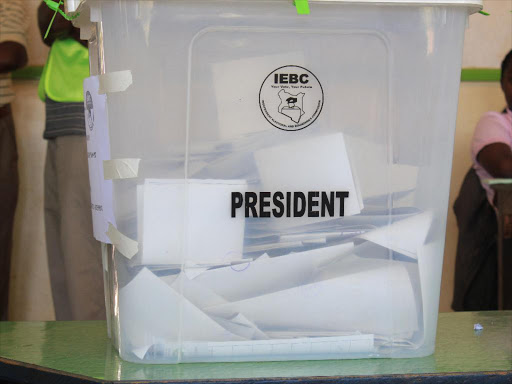 A ballot box at a polling station during a past vote.
Image: FILE

The debate on plans to scrap the presidential term limit based on age not period of service is creating political heat.

The proposal that the president age limit should be 75, is perceived as an extension of President Ruto's reign.

According to the proposal by a UDA lawmaker, Ruto at 55 has 20 years to be president if adopted by 2/3 majority parliament and a simple majority of Kenyans referendum.

The presidential age limit discussion does not augur well coming only after over two months since President Ruto was sworn in.

Despite the denial of the extended presidential age limit statements by top UDA party brass, nothing should be taken for granted.

Whether it's white or black smoke there is fire and Kenyan politicians in most cases make statements on behalf of their chief masters.

The Kenya presidential two-term limit came into effect in 1992 after the vigorous fight by selfless Kenyans who wanted more democratic space.

The 2010 Constitution upheld the same.

Article 142 of the Kenya Constitution, states person elected shall not hold office as president for more than two terms.

Though Ruto has not declared intent to vie beyond the current constitutional term limit, the narrative cements the perception advanced by his political opponents during the campaigns.

During and before his presidential campaign, Ruto and his allies passionately spoke against the BBI which among other things they said was to extend retired President Kenyatta’s term.

Additionally, the Ruto camps attacked Kenyatta and Odinga as dynasties, whose fathers had been in power for long and could not be allowed to continue ruling Kenya.

Ruto’s opponents termed him as shrewd, power-hungry and one with dictatorial traits.

Next-door neighbours, Uganda have had the same president since 1986.

President Museveni successfully managed through parliament which is largely controlled by the ruling party to vote age limit to be pushed to 75.

The original limit was 74 and could have locked out President Museveni to vie for the 2021  Ugandan elections.

His opponents went to court and surprisingly the Uganda Supreme Court upheld the lower court decision by a 4-3 majority.

Having succeeded in removing the age limit there was a clamour to push for an election term from 5 to 7 years.

Similarly, in Kenya, anything is possible because in the past our MPs have been rumoured to be available for hire to pass motions and amendments.

To crown it all Kenyan electorate is known to be influenced by ethnic perceptions as opposed to ideology.

Based on the above, if the presidential age limit debate goes to Parliament and later referendum, it might see the light of day.

However, staying too long in power turns a president into a dictator.

Though dictators often rise to power through coups some have gotten to power democratically.

For instance, in 1933, Adolf Hitler was appointed chancellor (head of government) by the then president Paul von Hindenburg.

After Hindenburg died, Hitler made himself both president and chancellor and the results of Hitler’s presidency were not pleasant.

The results of dictatorship are devastating.

Dictatorship puts power gets into the hands of a few people who make decisions on behalf of many citizens.

Could Kenya be sliding back to the dark eras of one person 20 years reign? Kenya’s second liberation heroes have stories to tell on the dangers of the long-term presidency.

Post a comment
WATCH: The latest videos from the Star
by MARTIN OLANDO
Opinion
09 November 2022 - 14:45
Read The E-Paper