GIKUNDA: If you didn't, you let us down. Just shut up!

Unfortunately, and sadly so, eight million Kenyans took us for a ride. Such a significant number to ignore.

• Despite their eligibility, these eight million voters flatly refused to go vote.

• They didn’t show up at the polling stations and are thus the reason we are experiencing political inconveniences. We must call the bluff. 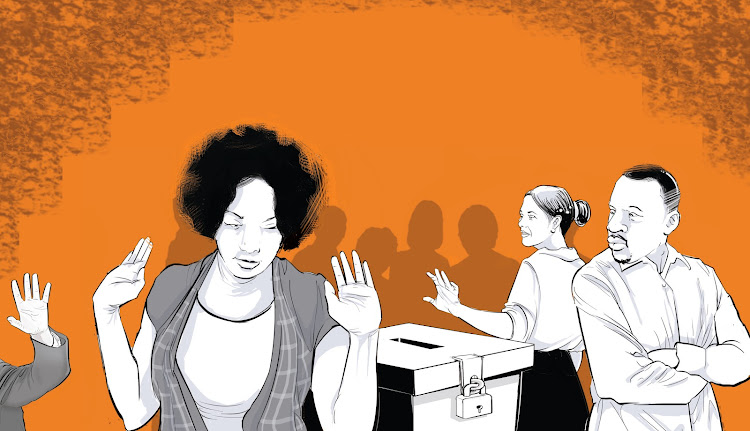 If you didn't, you let us down. Just shut up!
Image: OZONE

The IEBC projected that about eight million registered voters did not vote.

Despite their eligibility, these eight million voters flatly refused to go vote. They didn’t show up at the polling stations and are thus the reason we are experiencing political inconveniences. We must call the bluff.

If I were the IEBC chairman, I would publish their names in the local dailies to shame them. Maybe they cheat themselves that they are not known. We know all of you by names and location. We have been quiet for long. You are now abusing our calmness. You are enemies of democracy and we are calling you out. Your parasitic nature must be exposed.

You are the lazy type that receive support and take advantage from sincere voters without giving any useful or proper return. For far too long, you have lived on the hospitality of patriotic Kenyans. You are greedy type, the parasites with their snouts in the public trough. Stand out to be counted.

I agree that it is their democratic right not to vote, so is ours too. But we elected to exercise this right responsibly by showing up at our registered polling stations on August 9 to vote. Supposing we all fail to vote? Waking up early to queue up and vote is not cheap, neither is failing to vote. It is a sacrifice we make because we want good leadership.

We were greatly inconvenienced. We queued up. We endured the biting cold that morning. Some stood for long hours in the queues. We closed our businesses so that we could carry out this important civic duty. Some of us travelled to the villages. We spent money on bus fare. We have all the reasons to complain when the electoral commission delays in announcing the results of the winners. We exercised our civic right responsibly, so everybody else ought to have done the same. At my polling station, I saw elderly and sickly voters whose failure to vote is excusable.

Unfortunately, and sadly so, eight million Kenyans took us for a ride. Eight million is such a significant number to ignore. We are now paying a huge price because of their political insubordination. This is political sabotage. Yes, everybody else ought to have showed up to vote. They have no reason not to. What makes you so special that you can fail to vote and have the guts to face us?

IEBC printed the ballot papers with 22 million voters in mind. The country incurred huge costs at your expense. Preparations for voting were done with all the voters in mind. Thus showing up to vote is showing respect. Strangely, these eight million voters are part of the mammoth crowds we were all seeing at political rallies. They have let down the country at her hour of need. There can never be any justification for their refusal vote. Nothing. This is just immorality. It pains me.

I know they want to claim that they didn’t believe their voting would bring any meaningful change. The bitter truth of the matter is that by not voting, they actually voted ‘wrong’ leaders. Their indifference will cost us for the next five years. There are all the possibilities that if they voted, that ‘bad’ governor who has ‘won’ narrowly would have lost. That ‘good’ MCA who has lost by insignificant votes would have won the race.

That MP who has just made it by few votes would have won convincingly. Yes, their act of choosing not to votes has made the presidential votes to be so close. You are now solely to blame in case of a costly re-run.

What pains me most is the ignorance. You are not aware of the unnecessary inconveniences you are subjecting those of us who stopped everything to go and vote. It is not fair that we are being punished because of your attitude towards voting. When I hear some of you (the eight million of you) say that you want normalcy to resume, I feel insulted. I feel mocked. When I see you getting upset with delayed announcement of results, I feel ridiculed. The same person who refused to vote cannot be the same person getting upset with delayed announcement of results. How now?

Yusuf Toure, a resident of Imara Daima says the low turnout was a protest against poor leadership
Counties
1 month ago

Concerns over low voter turn out in Murang'a

IEBC said voter turnout was at 56 per cent one hour before stations closed.
News
1 month ago

Where are the youth who thronged campaign rallies?

Kiambu candidates say long queues witnessed during the 2017 general election were nowhere.
News
1 month ago
Post a comment
WATCH: The latest videos from the Star
by ASHFORD GIKUNDA
Opinion
15 August 2022 - 05:00
Read The E-Paper