IRUNGU: Why it's crucial for all to attend presidential debate

Let all attend and build this democratic tradition together.

•All presidential candidates are applying for this position know sovereign power belongs to the people of Kenya either directly through their own thoughts and actions or through those of their democratically elected representatives.

•As citizens, we need to know that we are constitutionally bound to respect, uphold, and defend the constitution with our leaders. 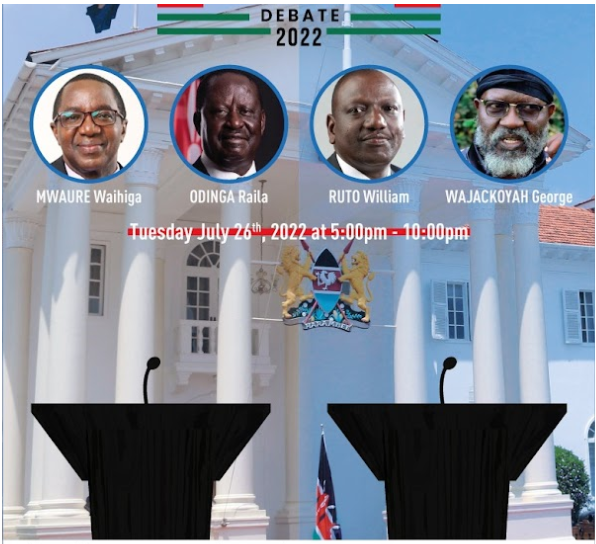 It has been over a century since the first elections were held under British colonial rule.

Seven decades later in July 1990, George Anyona stood in a Nairobi High Court and denied the treason charges against him and three others.

With the uncertainty surrounding the 2022 Presidential Debate, we must place what is at stake in both a historical and future context.

Only settlers of European, Indian, and Arab descent voted in that first colonial election in 1920.

It took four decades of anti-colonial resistance for Africans to have the right to vote.

Unlike American electoral history where it took one hundred years for women to be handed a ballot paper, African women and men voted together for the first time in the 1961 General Elections.

This moment of electoral emancipation was short-lived. In under a decade, fundamental freedoms of expression, assembly and association were smashed by the one-party state.

With these rights went the right to vote for candidates of our choice and for any citizen to stand for public office.

It is hard to imagine in the current world of social media that in the 1970s speaking about the death or deposition of a President could attract a mandatory sentence of life imprisonment.

By the time the late George Anyona, Njeru Kathangu, Edward Oyugi and Ngotho Kariuki faced the one-party state to deny they had plotted to overthrowal the Moi-KANU government, they had been tortured, starved and food and access to their families and lawyers.

The four had been arrested in July 1990 after riots sparked by a multiparty debate rocked Kenya and led to over twenty deaths. Every year, this moment is celebrated as Saba Saba day by social justice advocates.

A decade before their arrest, the late Dr Ooko-Ombaka described the darkness of the one-party era very eloquently.

The culture of constitutionalism depends on parties, regular free elections, an independent parliament and judiciary, and public debate to manage power relations and conflict.

Successive weak ruling classes fearing democratic debate and competitive politics might lead to their displacement turned to the tactics of domination.

Using anti-human rights laws like sedition and treason, democratic debate and the right to dissent were criminalised for almost fifty years.

It was constitutional public debates that gave us the 2010 constitution. Article 1 has now legally buried the idea that elites determine the destiny of our nation.

All presidential candidates are applying for this position know sovereign power belongs to the people of Kenya either directly through their own thoughts and actions or through those of their democratically elected representatives.

As citizens, we need to know that we are constitutionally bound to respect, uphold, and defend the constitution with our leaders.

Our governance cycle starts with electing the right men and women to office.

With many Kenyans cynical and 15 per cent still undecided, issue-based dialogues are fundamental for restoring the power of the vote for millions.

It is for this reason over the last six months, candidates, communities, and citizens have been holding and financing their own debates, rallies, town halls, community dialogues and peace concerts.

In this context, the trend of a few candidates refusing to participate in elections debates has been worrying. Sunday’s Azimio la Umoja secretariat statement that veteran democratic champion Raila Amolo Odinga will not participate in Tuesday's Presidential Debate disappointed millions.

Withdrawing from a public leadership debate betrays the victory Anyona and hundreds of former political prisoners worked so hard for us to have a nation that allows anyone seeking the highest office to openly come before us and seek our mandate.

Whereas the Presidential Debates in 2017 saw an incumbent candidate hide behind the power of incumbency, this election has no incumbency.

All candidates must avoid being portrayed as too confident or powerful to come before us, their employer.

Coming at such a tense moment in a closely run electoral race, this last-minute pull-out also risks the calm the nation will experience seeing all presidential candidates in one room debating in a civil manner.

The Presidential Debate Secretariat and moderators must address candidates' concerns and moderate the debate fairly and respectfully.

Respect for the dignity of all candidates is important and there are some big public issues at stake also. 35 per cent of the electorate want policy proposals that address runaway corruption, unaccountable governance, runaway debt, and the rising cost of living.

This Presidential Debate is not a duel between politicians or a televised debate watched by 34 million people. These debates are how we, as voters, listen to all ideas and choose those who come to lead us. They are the starting point of rebuilding national public accountability and the leadership integrity of all candidates.

Let all attend and build this democratic tradition together.

The senator said Raila should concede defeat, instead of looking for reasons to miss the debate.
News
3 weeks ago

Is Raila justified to keep off the presidential debate?

Is Raila justified to keep off the presidential debate?
Poll of the day
3 weeks ago

She said that Raila deserves respect and he cannot attend a debate that that will be based on character assassination.
News
3 weeks ago

The presidential debate will be held on Tuesday, July 26 at the Catholic University of East Africa.
News
3 weeks ago

"I want to encourage my competitor, Mr Kitendawili, reconsider coming for the debate, I will be waiting for you," he said.
News
3 weeks ago
WATCH: The latest videos from the Star
by IRUNGU HOUGHTON
Opinion
25 July 2022 - 16:18