Asia can save the world from the doldrums

Region has avoided adopting extreme or open partisanship during global crises pitting regions and countries against one another.

•Leading Asian economies China and India can steer the BRICS top developing economies towards the introduction of a new empathetic development paradigm that leaves no one behind.

•The Global Security Initiative (GSI) has confirmed China as a champion of world peace and a positive force for global security. 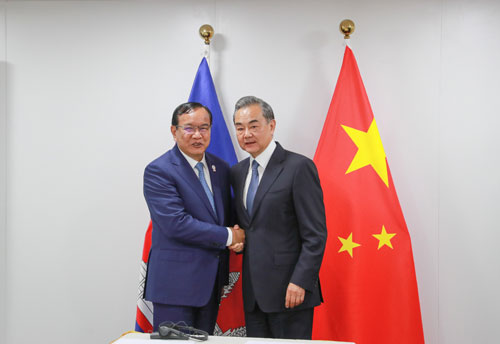 The world is not what is used to be. The global social and economic landscape has changed drastically, and is still changing inexorably. Unlike a couple of decades ago, no one country can claim to hold the world at ransom by virtue of its unilateral power.

In the current circumstances, there is an increasing vacuum as the erstwhile global powers fall victim to developments beyond their control. Indeed, the Covid-19 pandemic exposed the underbelly of the “untouchables”, proving that, after all, we are all vulnerable to nature.

Comparatively, much of Asia withstood the pandemic even as developed countries like the United States and the European Union were devastated. There are only a couple of Asian countries that rank among those with the highest death toll from the pandemic. It is also instructive that Asia sustained the supply chains as the world grappled with lockdowns and other socio-economic disruptions.

But Asia has not beaten its chest about its solidity, even as the continent actually holds some key solutions to overcoming both old and emerging obstacles. This is the spirit with which Chinese State Councilor and Foreign Minister Wang Yi on Sunday appealed to the world to listen more to Asian voices during a virtual meeting with Cambodian Deputy Prime Minister and Foreign Minister Prak Sokhonn.

According to Wang Yi, the world is now entering the "Asian moment," a new era characterized by the continent’s compassionate governance model. Even amid foreign interference, Asia has managed to hold its own and has come of age ready to offer much needed leadership to a world that is growing increasingly restless and divisive.

There is no doubt that Asia has a lot to offer in stabilizing the world if major countries, particularly Western, can for once stop talking in their echo chambers where they only hear their voices. The continent has really what it takes across the governance spectrum to stand in the widening gaps caused by lack of resources and political goodwill.

Asia is a neutral continent and has generally avoided adopting extreme or open partisanship during global crises pitting regions and countries against one another. In the current Russia-Ukraine crisis, for instance, Asia has avoided directly wading in the conflict amid coercion and attempts at manipulation to condemn Russia.

The 2021 United Nations “World Urbanization Prospects” lists eight Asian cities among the fastest top ten growing in the world. These include Delhi and Bangalore in India, Shanghai, Chongqing, and Beijing in China, and Lahore in Pakistan. Leading Asian economies China and India can steer the BRICS top developing economies towards the introduction of a new empathetic development paradigm that leaves no one behind.

As the largest Asian economy and the second largest in the world, the Chinese FM intimated that China was ready to take the leadership mantle in order to harness the continent’s synergies both internally and externally. China is the most powerful and influential Asian country, it has the longest experience in overcoming adversity in the region, and is the most discerning in identifying deception that comes dressed in friendship.

China has also waded into global leadership with two major initiatives. One is the Global Development Initiative (GDI) which has been adopted by the UN among the major catalysts of accelerating the 2030 Agenda for Sustainable Development. The GDI has received the support of nearly 100 countries and international organizations.

The second is the Global Security Initiative (GSI) which aims at achieving “a more just and equitable global governance system with a view to building a community with a shared future for mankind”. The GSI has confirmed China as a champion of world peace and a positive force for global security.

The 21st Century is really the Asian moment. With countries that have invented some of the most advanced technologies in various fields, Asia can steer the world free from its current dire straits

The role of the prehistoric Asian culture as a nexus for global peace and development cannot be underestimated. It encompasses the collective and diverse customs and traditions of art, architecture, music, literature, lifestyle, philosophy, politics and religion that have been practiced and maintained for eons. These influences have added a lot of value to human development.

The 21st Century is really the Asian moment. With countries that have invented some of the most advanced technologies in various fields, Asia can steer the world free from its current dire straits firmly back to the road towards sustainable peace and prosperity.