• Every year on May 9, with great fanfare Moscow celebrates the victory by holding a show-off parade.

• This parade has nothing to do with a commemoration of those who died in World War II. 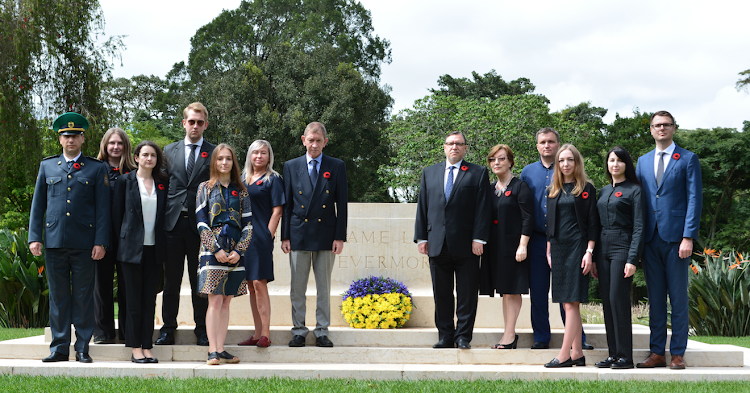 Today, on the Day of Remembrance and Reconciliation, the whole world honours the fallen heroes of the World War II. The tragic history that people of all nations hoped will never repeat again, unfortunately, has become a reality of the Ukrainian nation.

Just like Hitler’s Third Reich did 80 years ago, on February 24, 2022 Russia launched unprovoked and unjustified invasion against a sovereign country in Europe.

Indeed the history is cyclical, though this time the war returned with even more horrendous atrocities. During World War II, the Nazis killed 10,000 civilians in Mariupol within two years of the occupation, whilst Russian invaders have already killed more than 20,000 residents of Mariupol just within two months.

The troops of Kremlin regime are using Nazi symbols while committing war crimes and crimes against humanity — indiscriminate attacks, mass killings, rape, torture, and forced labour. And just like the Stalinists and Nazis, today Russia brutally loots Ukrainian grain and blocks shipments from Ukrainian ports, endangering the food security of the world, creating serious challenges to a number of countries including those in Africa.

Every year on May 9, with great fanfare Moscow celebrates the victory by holding a show-off parade. This parade has nothing to do with a commemoration of those who died in World War II. In fact, it is just another tool of Russia’s propaganda to strengthen the support of Putin’s regime, including its war against Ukraine. We call on the international community to take those celebrations for what they truly are.

Today with the deep sorrow in our hearts as the Ukrainian soldiers continue to die in a fight against Russian aggression, we pray for all the defenders, who sacrificed their lives for their homelands and people’s freedom.

History proved – the truth and justice do prevail and we do believe that Kremlin’s evil regime will fall just as the Nazis’ one. It will be definitely remembered as the biggest disgrace to humanity and a shame to the Russian nation.

Andrii Pravednyk is the Ambassador of Ukraine to Kenya and Rwanda

About 90 people had been sheltering in the building and 30 were rescued.
News
2 weeks ago

About 200 civilians are believed to be sheltering inside, including children.
News
2 weeks ago

The conflict has triggered a new international system, and the multipolarity is in its dawn.
Siasa
2 weeks ago

The Elysee office also said Macron had reiterated that a ceasefire was needed in Ukraine.
News
2 weeks ago
by ANDRII PRAVEDNYK
Opinion
08 May 2022 - 19:00