There are cracks in Azimio coalition party, with some of the parties crying foul of being sidelined

•As of the close of that deadline on April 9, the Kenya Kwanza team had neither deposited a coalition party nor a coalition of parties merger.

• It appears then that the only coalition party deposited with the Registrar is the Azimio la Umoja One Kenya led by President Uhuru Kenyatta and Raila Odinga. 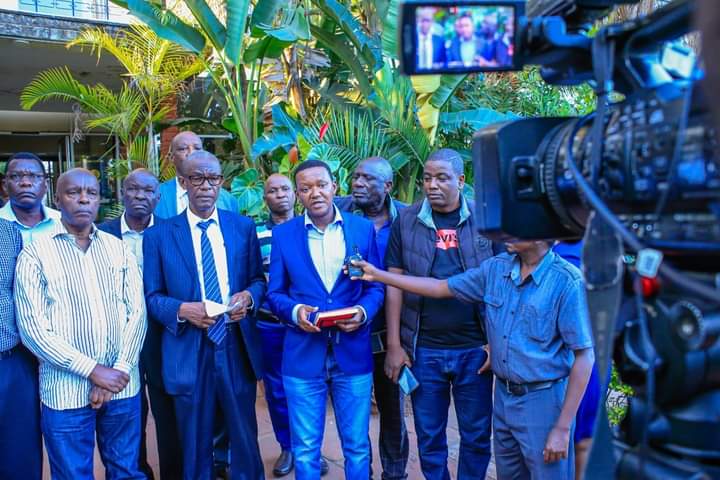 The newly amended Political Parties Act continues to define the political landscape ahead of the August elections.

The amended law provides a broader definition of a political party, which includes a coalition political party. Parties intending to form a coalition were under a legal obligation to deposit the signed agreements with the Registrar of Political Parties by the close of April 9, four months before the August election.

It should be on record that as of the close of that deadline, the Kenya Kwanza team had neither deposited a coalition party nor a coalition of parties merger. It appears then that the only coalition party deposited with the Registrar is the Azimio la Umoja One Kenya led by President Uhuru Kenyatta and Raila Odinga.

The announcement by Kenya Kwanza principals that they agreed to form a coalition of parties instead of a coalition party has generated public debate around the new amendments.

The option for submitting a coalition of parties agreement has a deadline of May 8 this year. We may have to turn our attention to the advantages and disadvantages of the two available options.

It should be noted that already, there are cracks in the Azimio coalition party, with some of the constituents' parties crying foul of being sidelined.

In a high-octane political competition like ours, questions around which side of the coalition can guard regional and individual interests will be an interesting twist to watch as we head to the elections.

What is the reason behind Deputy President William Ruto, ANC boss Musalia Mudavadi and Ford Kenya’s Moses Wetang’ula opting for a coalition of parties merger?

In my considered view, this option provides a window to pick new friends ahead of the May 8 deadline and navigate around the strict terms of the Political Parties (Amendment) Act, 2022 for a coalition party.

With this move, UDA can galvanize its support around the country and welcome new friends along the way even as Ford Kenya, ANC and the Democratic Party, among others, remain coalition members.

The next battlefront is the choice of the running mate. Regional balancing and constituent party bargaining are put to test. It is rumoured that the reason why Ruto wants to run on the UDA ticket as opposed to Kenya Kwanza is galvanizing the party’s support and to also have the position of who becomes the running mate its preserve.

Mudavadi ranks high as a potential running mate for the DP but that choice would easily galvanize the Western voting bloc that has in the past supported Raila. However, Mt Kenya leaders close to the DP have been engaged in a fierce battle on who deputises Ruto.

It is not clear if by joining Kenya Kwanza, National Assembly Speaker Justin Muturi will be considered for the post.

On the other hand, the Azimio team faces the same dilemma.

The recent cracks appear to have been informed by the competing interests and mistrust among the constituent parties. It is rumoured Jubilee will produce the running, while Wiper has been categorical that Kalonzo is the best choice for Raila.

Eric Nakhurenya is a public policy and legal consultant

Mudavadi's remarks came on the deadline day for joining or forming a coalition political party.
News
1 month ago

Governor Alfred Mutua: I want to be Raila's running mate

Mutua expressed confidence that Raila will win the presidency in the August 9, polls.
News
1 month ago

Raila said the matter of the running mate will be decided later.
News
1 month ago