The two attacks caught the intelligence by surprise but there were major differences in the security responses in both cases.

•The attack left 21 people dead and about 28 injured.

•Unlike the Westgate Mall attack, it is evident there were faster and coordinated responses at the DusitD2 Hotel. 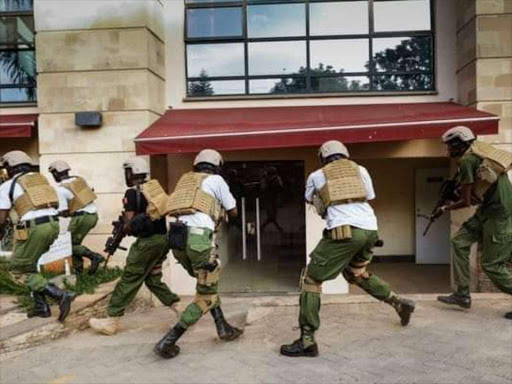 On January 15, 2019, an otherwise normal day turned gruesome when the Dusit D2 Complex in the Westlands was attacked.

The attack left 21 people dead and about 28 injured.

One significant attribute of the attack is that it took place a few years after the September 21, 2013, Westgate Shopping Center terrorist attack. The two attacks happened within a radius of three kilometres.

And three years down the line, it is pertinent to ask ourselves hard questions.

First, how different were the two attacks in terms of the legal and tactical counterterrorism environments in which they took place? And secondly, were there significant differences in response to the two attacks by national security forces?

First and foremost, the two attacks caught the intelligence by surprise but there were major differences in the security response in both cases.

In the Westgate Mall attack, it took more than one hour for security agencies to respond.

There were also major coordination lapses between the various cadres of security agencies during the four days of engagement with armed terrorists.

The fact that citizens were not also well prepared on how to act in case of terrorist attacks complicated the situation further. This put to question the effectiveness of Kenya’s disaster management system.

There was an absence of a clear policy on how to respond to an attack of such a nature. For a sustained period, the police dealt with the attack as if it was an armed robbery.

The attack took place before the Security Laws Amendment Act, 2014, which introduced several substantive amendments to the Prevention of Terrorism Act, 2012.

At that time, the act was yet to be fully implemented. Massive debates still surrounded it, especially on issues related to religious and ethnic profiling. One would therefore conclude that there was a limiting counterterrorism legal environment during the attack.

Within minutes of the attack, security agencies put the terrorists on defence. The responses were handled in a swift, coordinated and effective manner, thanks to the implementation of the then established Joint Standard Operating Procedures at the tactical level.

The policy environment had been greatly expanded to enhance the coordination of specialised security units during tactical responses. Owing to the fast response, it also became possible to curtail the ability of the terrorists to project the terror event and communicate with their base in Somalia.

As opposed to the Westgate Mall attack, there were also colossal improvements in the information management between government agencies and the media.

The fact that Kenya adapted quickly and bridged the coordination and response gaps identified in the Westgate Mall attack led to many positive response outcomes.

It is thus evident that for strong responses to a terror attack in Kenya, there is a need to ensure that policies on swift and prompt response in the event of an active terror attack are meticulously honoured.

Also, there should be an effort to explore ways in which structured responses to terrorism could be established and operationalised.

Furthermore, the proliferation of small and light weapons in Kenya should be thwarted, and the use of social media should be guided to ensure effective and safe information exchange.

During the DusitD2 attack, WhatsApp and Twitter were targeted for misinformation and disinformation.

Additionally, well-publicised telephone numbers that survivors can use to communicate with security agencies in case of attacks should also suffice. Mechanisms for buttressing community policing initiatives such as the “Nyumba Kumi Initiative” should be strengthened.

By Nyatichi Asanga - a security practitioner