CSOs play a very critical role alongside the media during an election.

• CSOs provide employment opportunities to Kenyans and direct foreign funds that provide supplementary services to those offered by the government. 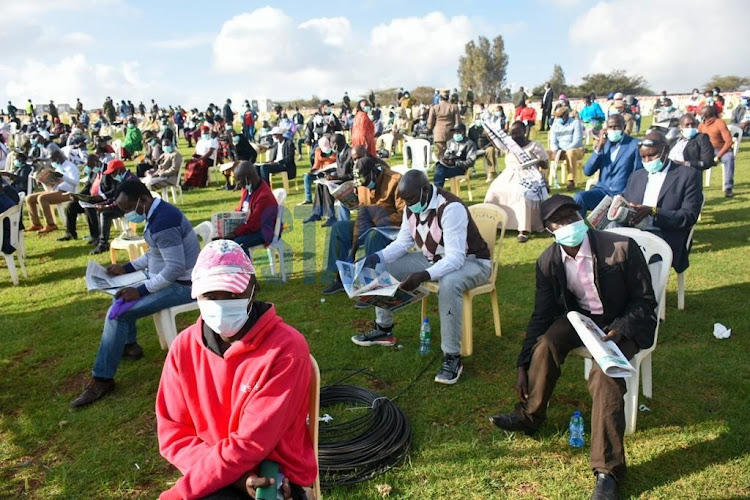 Members of the public at Uhuru Gardens during the 57th Jamhuri Day celebrations on December 12, 2021.
Image: MERCY MUMO

The continued reluctance to give the Public Benefits Organisations (PBO) Act, which regulates civil societies in Kenya is killing the sector, which has an enormous impact on Kenyans. There is a great confusion that this failure to operationalise the PBO Act has created, for the authorities apply segments of the law and sometimes apply the provisions from both the repealed NGO Coordination Act, which is unfair, and smirks of impunity.

This has denied Kenyans a big chunk of services that these organizations provide when operating legitimately.

Given the background around why the new law was introduced, and the public bashing civil society organisations receive, many development partners and beneficiaries got discouraged from dealing with them, and a very negative perception was created around them, which has frustrated their work.

In addition to providing critical services and accountability mechanisms on governance issues, CSOs provide employment opportunities to Kenyans and direct foreign funds that provide supplementary services to those offered by the government, especially in the economic, social, and cultural spheres, where government neglect is rampant.

The decision to delegitimise CSOs was largely grounded on the work they do in the realm of the civic and political right, and the politics around the role in influencing elections and civil responsibility then, and it’s wrong to continue denying them space to operate through giving a commencement date to the PBO Act 2013.

Given their level of leadership, knowledge, grasp of local issues, expertise, and influence, policymakers have sought CSOs whenever making decisions for advice, when dealing with issues of a complex or technical nature. The onset of information and communication technologies have fueled their impact through opening spaces of power, influence, and association to new configurations of actors, leading to significant growth of online civil society activity, and enabling networks to be built across geographical, social, and physical divides.

The PBO Act 2013 has seen both legal/courtroom battles and Parliamentary interventions since then, but the situation remains the same; the Act is yet to be given a commencement date. Through the courts, the Government was given 14 days to appoint and publicise a date for the coming into operation of the PBO Act.

The judge had declared that the decision by the Ministry to appoint a Taskforce to amend and or propose amendments to the PBO Act, before it became operational, was illegal and contravened Articles 10, 94, 116(2), 129, and 153 (4) of the Constitution.

Through Parliament, CSOs, through Hon. Agostinho Neto, tabled a bill in Parliament – the PBO (Amendment) Bill, 2016 – seeking to commence the PBO Act. The Bill went through the first and second readings in 2016 and later in 2016 the clerk of the National Assembly called upon the public to submit memoranda on the Bill, in line with public participation requirements. However, Parliament was annulled before the Bill made it to the third reading.

The Civil Society Reference Group has gone back to court over the same, engaged political leaders including petitioning Parliament and related advocacy over the same without success.

This reluctance to implement the Act has caused tensions between the government and non-state actors, which many times are unnecessary and disadvantages Kenyans, including failing to tap into the resources within the CSOs sector, lack of effective self-regulation in the sector, increased misuse of public resources and eroding gains made in the governance and democratization process and denial to access supplementary resources to support economic development in the country.

CSOs play a very critical role alongside the media during an election, especially in civic education, voters rights, and ensuring that the country prepares well and holds a free, acceptable, and credible election. With the 2022 general election nearing, it is prudent that the PBO Act is given a commencement date without any further delay, as the country has done proper civic education as expected since 2010 with the promulgation of the Constitution.

Look at what happened during the BBI processes and currently in Parliament along with the political parties and electoral laws, and you notice we need serious civic education in this country, otherwise, voters’ education will falter.