Disarmament and demobilisation in North Rift

Demobilization is the formal and controlled discharge of active bandits from armed groups.

•Disarmament is the collection, documentation, control and disposal of small arms and ammunition.

•It also involves the development of responsible arms management programmes. 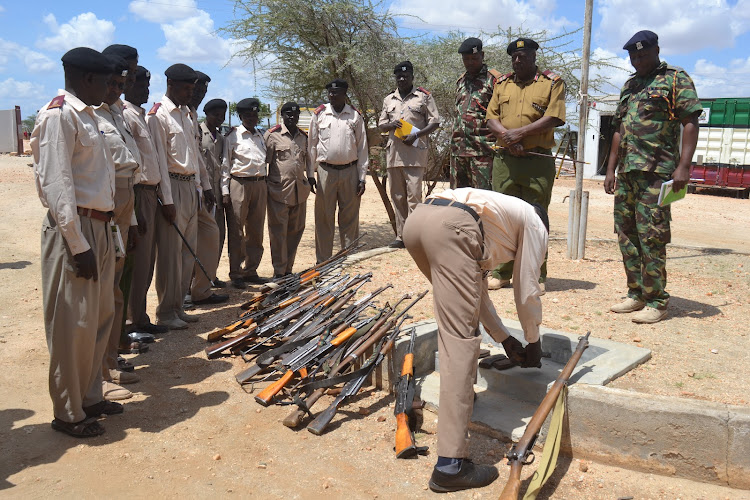 Insecurity, elusive peace and stability in North Rift Kenya (Elgeyo/Marakwet, Baringo, Turkana, West Pokot, Samburu and Laikipia Counties) has been a challenge of the Kenyan government in the affected areas. This is because of banditry enabled by the use of illegal guns and ammunitions by the bandits in the communities.

For years, the government has been doing disarming bandits and civilians which has proven to be an exercise in futility as the bandits still possess and torment warring communities. The question is, why has the exercise been unsuccessful despite the level of resources channelled? The answer lies in not following through on the practical approach of; Disarmament, Demobilization, Reinsertion, Rehabilitation, Reintegration, Empowerment and Education (DDRRREE).

Disarmament is the collection, documentation, control and disposal of small arms and ammunition from the hands of bandits or civilians and the development of responsible arms management programmes. Being a resident of one of the mentioned counties affected by constant banditry and having seen banditry followed by disarmament done with little or no success by the GOK, I strongly suggest the following strategies that may have not been exploited in the past.

Demobilization is the formal and controlled discharge of active bandits from armed groups. This may extend from the processing of individual bandits in temporary centres for debriefing/counselling. This could also encompass the support package provided to the demobilized, which is leads to insertion. This is an area that has not been exploit thus leaving the disarmed bandits on their own forcing them to acquire other illegal guns and relapse to banditry hence the vicious cycle of insecurity and instability between communities. To achieve the objectives of disarmament, the GOK should adapt demobilization as a strategy.

Contextually, reinsertion is the assistance offered to ex-bandits after demobilization but prior to the longer-term process of rehabilitation leading to reintegration. Reinsertion is a form of transitional assistance to help cover the basic needs of ex-bandits/warriors and their families which includes; food, clothes, shelter and Medicare etc. for a certain period of time like one year. This is an area that the GOK has not exploited and I highly recommend that this is exploited in a multi-agency, NGOs, CBOs/CSOs approach.

Rehabilitation is reforming of the disarmed bandits to be useful members of the community away from banditry. For the previous disarmaments done, there have never been programs directed towards reforming them so that they could be dissuaded from engaging in banditry. It behoves the GOK and other stakeholders to come up with rehabilitation programs directed towards disarmed ex-bandits to enable their reformation in preparation of reintegration.

Reintegration here refers to as the social and economic process of assisting ex-bandits /warriors to be accepted fit into the community. This approach has never been applied by the GOK or other players leaving the ex-bandits on their own to deal with their problems after disarmament posing risk of ex-bandits relapsing into banditry. Reintegration presents an opportunity for a paradigm shift for ex-bandits to fit into the community and become positively useful and peaceful.

Empowerment of ex-bandits means working/supporting them to take control/responsibility for their own lives through self-reliance away from banditry. For the previous unsuccessful disarmaments, there have never been any form of empowerment for the ex-bandits who voluntarily surrendered the illegal guns or otherwise. This is an opportunity for the GOK and all the stakeholders to employ various forms of empowerment for ex-bandits for self-reliance, peace and stability.

Education is a paramount strategy of peace and security. Short/long term education and training has been lacking for the ex-bandits after any disarmament. This lack of education strategy makes the ex-bandits remain in their previous state and banditry mind-sets. The GOK can introduce relevant forms of education to the ex-bandits depending on their risk and needs assessment with the aim of instilling them with formal or informal education for knowledge, skills and self-reliance.