No; Uhuru has not been 'shunned' in his own backyard

•Neither Uhuru nor his political prowess was on trial in Juja.

•There is no jury to speak of. 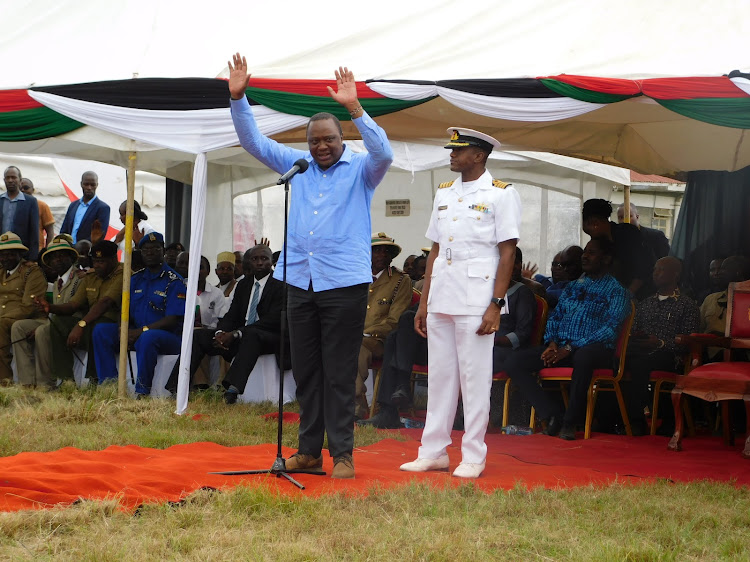 In an opinion piece appearing in the Star “Shunned by backyard: Lonely final lap for lame-duck president,” its writer, Henry Makori attempts to explain why the headline of his piece is true but falls short in even convincing the average reader this is remotely the case.

You know you are off to an entertainment piece not anchored on any facts and far removed from reality when the author declares from the get-go that “[the] jury is in. Mt Kenya has washed its hands of President Uhuru Kenyatta.” That is a remarkable assertion which tells you all you need to know about the piece because it is factually baseless.

Neither Uhuru nor his political prowess was on trial in Juja so there is no jury to speak off. Even if one were to make the case that Uhuru’s prowess was on trial, his party’s candidate losing in a poorly run campaign in an election where turnout was poor is not and cannot be a reflection or measure of what the whole region of Mt. Kenya thinks about the president.

While at it, we need and must stop this balkanization of the country; Uhuru is president of ALL Kenyans whether one region or another hates him for whatever reason should be a cause for concern, not gleeful celebration.

But do not tell that to the writer who goes on to say “Residents can’t wait to see his back. He won’t be missed. ‘Maliza uende’, they are shouting each day. The region is busy beating a new path to a post-Uhuru era.” It is not fact, but the writer’s opinion, which is alright as everyone is entitled to one.

In an effort to pass this opinion as fact, the writer offers his reason for the sweeping conclusion by way of arguing that there is “no other sensible way of explaining the thrashing of Jubilee candidate Susan Waititu in the Tuesday by-election in Juja. Uhuru is the party leader. His candidate managed just 5,746 votes against George Koimburi’s 12,159. The winner belongs to the little-known People’s Empowerment Party of Moses Kuria, Uhuru’s Gatundu South MP. Kuria is a Tangatanga stalwart.”

That may all be true, but it quite a leap to jump from there to make the false conclusion that therefore the people who the writer assumes will decide who will be our next president have had enough of Uhuru and want him gone from office.

As I and others have repeatedly pointed out, there are several dynamics at play in within the Kikuyu community that when all is said and done, everything would align, and the country will have a new president consistent with what the handshake duo have set forth as the roadmap.

That is what keeps many in need of upset stomach medicine as they cannot stomach the idea.

Finding no facts to support his fiction, the writer directs his reader to someone else who is equally without any facts but has very suggestive question: “Jubilee’s decisive humiliation this week,” the writer opines, “prompted law professor and columnist Makau Mutua to pose: “Gatundu South MP Moses Kuria gives Uhuru Kenyatta a shellacking in his Juja backyard. Could this be a sign that Mr Kenyatta has lost Mt Kenya and won’t be a factor in 2022?”

It is a rhetorical question Mutua posed to say Kenyatta has lost Mt. Kenya and that therefore will not be a factor in 2022. The writer might as well list a string of opinion and rhetorical questions from all known pundits in the country espousing the same proposition, but none of that would turn Uhuru into someone who has “lost Mt. Kenya” or one who will not be a factor in 2022.

To believe either or both is to not know nothing about Kenyan politics or to know yet be naïve as to not see why such a belief is faulty.

The Jubilee government may have not delivered on all its promises, but the handshake and impending passage of BBI changes the dynamics such that progress or lack of progress is now to be viewed and measured by which direction the country as whole, goes after 2022, not whether one region is happy or not happy with BBI.

Notwithstanding all the noise you hear about BBI which, as we shall continue to point out, is opposed by many for nefarious reasons, passage of BBI will, in fact, put the country on the right track to correct past wrongs and pave way for rancor free elections and more inclusive government.

“The by-election fiasco follows the High Court rejection of his attempts to amend the Constitution through the Building Bridges Initiative, which is opposed by his backyard. These two events fully launch the President into his lame-duck days before he leaves State House next year,” declares the writer. He is plain wrong.

As I have noted previously, the High Court overreached in its BBI ruling and is likely to be overturned on appeal, so, one should not put much stock in the ruling until after all appeals are exhausted. It is counsel that is likely to be ignored by those who are pinning all their hopes on the ruling to kill BBI—and that is comically understandable.

While the concept of lame-duck presidency exists in theory, in practice it means far too many different things and its unsuitability in African context render it a useless concept in as far as gauging exercise of presidential powers goes.

Put another way, dismiss an African president as lame duck at your own peril.

After beating around the bush for a while, the writer comes to the gist of what his piece is about:

“Despite offering Mt Kenya immense benefits, the BBI is largely perceived as a project to help achieve a Raila Odinga presidency next year. Raila is anathema to Mt Kenya. The handshake at the expense of Ruto who helped Uhuru win the presidency twice is unforgivable in the region. Raila is seen as fixated on becoming president, whereas Ruto has packaged himself as the hustler who understands and offers realistic solutions to the problems Mt Kenya people face.”

It would take time and space not available to unpack the untruths, fallacies, and rich imaginations in this assertion but let it suffice to say it is a known fact hatred of Raila is in large part the reason why nearly everyone who hates BBI does; it is a hatred that is being cleverly, and I must add thus far effective in demonizing BBI among one community which someone is pinning all their hope as the ticket to State House.

We should remind them Kenya is comprised of more than 41 communities and each one will have a fair say in who becomes our next president.

“A sign as clear as the noonday sun that Uhuru is no longer the Mt Kenya kingpin is the visit last month by a large number of Mt Kenya leaders who presented to Ruto a wish list for their support of his presidential bid,” the writer goes on.

One can visit and provide a potential presidential candidate a wish list two kilometers long but that means absolutely nothing. If we are to have leaders who are worth the high offices they hold, we must rise above being impressed with things that mean nothing; let us instead interrogate these leaders’ present and past contributions in development or lack thereof and judge them accordingly.

Having plugged his candidate of choice, the writer prepares his for his slum dunk ahead:

“Like Narc and PNU before it, Jubilee will crumble before the next election. It has served its purpose. Moreover, Uhuru will leave a legacy of economic ruin, over-the-top corruption, disease, a mountain of public debt, unemployment and illegal attempts to mutilate the Constitution to suit his narrow agenda,” the writer starts dribbling.

“No serious leader or voter from Mt Kenya and most regions of the country would want to associate with the discredited political vehicle he used for his disastrous mismanagement of the nation,” the writer lays up the ball.

“Just 14 months to his final exit from the house on the hill, Uhuru has almost zero chance of wooing back Mt Kenya. He has taken the region for granted for far too long. The son of Jomo walks a lonely path into the dusk of retirement in Ichaweri village, shunned by his own people,” the writer delivers what he believes to be a slam dunk.

Except it is not.

When it is all said and done, and so long as Uhuru is committed to the handshake and passage of BBI, the much maligned but critical constitutional changes will become law and deliver the country from the bondage of backwardness we have been engulfed in for far too long.