Several presidential hopefuls keen to have the head of state's support.

• Besides Raila, the One Kenya Alliance of Mudavadi, Gideon, Kalonzo and Wetang’ula is also banking on Uhuru’s support.

• And where does Uhuru’s idea of not supporting another Kalenjin or Kikuyu presidential candidate leave Gideon, whose late father he owes a huge political debt? 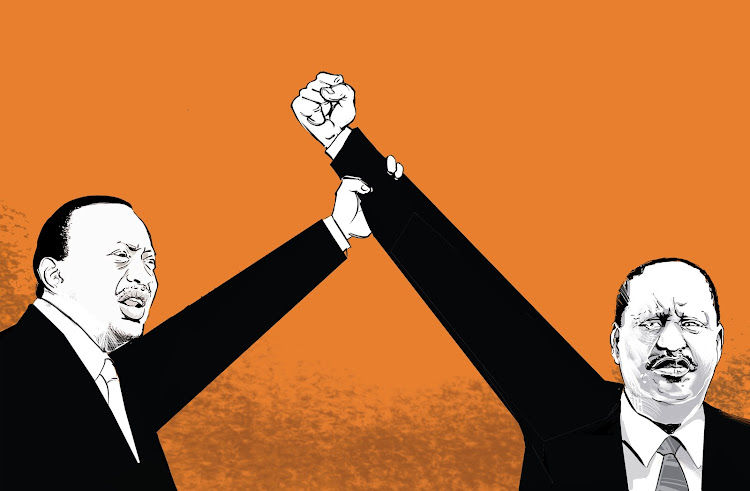 A Star opinion poll on Wednesday asked readers whether they thought President Uhuru Kenyatta would ditch ODM leader Raila Odinga. Most respondents (67 per cent against 33) said he would.

It is the wisdom on the street. If Uhuru divorced Deputy President William Ruto who twice helped him win State House, why would Raila be sacred to him?

The result of the poll is indicative of the President’s deepening dilemma as uncertainty mounts about the future of the handshake. Both Uhuru and Raila insist that their March 9, 2018 rapprochement to end the 2017 election tensions that brought the country to the brink of disaster is about uniting the country. It has nothing to do with the Uhuru succession.

But nobody buys that tale. Uniting the country, shared prosperity and all that jazz is the least of a Kenyan politician’s concerns. Their priority is acquiring and retaining power to benefit themselves, their families and henchmen. That’s the public record.

Which is why Raila’s followers are restless that Uhuru is taking too long to openly endorse their man for the 2022 election in appreciation of his support. The handshake has guaranteed Uhuru a peaceful political environment over the last three years.

The streets are quiet—no protests. Most public anger has moved to social media and occasional statement by activists. Parliament is in bed with the Executive.

The moribund Raila-led Nasa coalition, which is supposed to keep the government on its toes as the de facto opposition, has remained silent as Uhuru runs the economy aground, piles the public debt to the rafters, disobeys court orders, presides over massive looting of public money and pays lip service to national crises such as massive unemployment and poverty.

On the other hand, Uhuru’s Mt Kenya backyard has all but deserted the President after he walked out on his erstwhile buddy Ruto, apparently in favour of Raila. The ODM leader is unsellable to Mt Kenya as Uhuru’s successor. As the kingpin, Uhuru has not told the region whom to vote for next year if not Ruto.

What’s more, the President has never explained convincingly to his people why he reneged on his promise to support Ruto for 10 yeas after completing his term. Who in the region knows exactly why the DP all of a sudden became Uhuru’s enemy?

Besides ODM and Raila, the One Kenya Alliance of Musalia Mudavadi (ANC), Gideon Moi (Kanu), Kalonzo Musyoka (Wiper) and Ford Kenya’s Moses Wetang’ula is also banking on Uhuru’s support after he signalled he would not back another Kikuyu or Kalenjin as his successor.

But the biggest test OKA faces is who will be the coalition’s presidential flag-bearer. Musalia and Kalonzo, who have previously been Raila’s running mate, insist they must be on the ballot.

And where does Uhuru’s idea of not supporting another Kalenjin or Kikuyu presidential candidate leave Gideon, whose late father he owes a huge political debt? Without President Daniel Moi pulling Uhuru out of political obscurity and creating the path for his rise to the presidency, Uhuru would today be a nonentity only with a famous name.

The proposed expansion of the Executive under the BBI seems to solve Uhuru’s succession headache. The new structure could accommodate the big men Uhuru owes political debts.

But the BBI is in limbo. The Covid-19 restrictions imposed by the government, a hostile public angry at Uhuru’s failures, the numerous court cases against the process and waning enthusiasm among Raila’s self-declared cows as the next election fast approaches could kill the BBI.

Sixteen months to the end of his rule, Uhuru has many political debts to pay. All his backers want his endorsement, which means inheriting his vote-rich Mt Kenya bloc, support of the deep state and getting campaign money from the fabulously wealthy Kenyatta dynasty.

But Uhuru cannot endorse everyone. It is obvious some of his current friends will be disappointed. It isn’t a big worry, really. Uhuru has nothing to lose going into retirement. The Kenyatta family is so powerful it will wield huge political influence in Kenya for the foreseeable future regardless of who is in power.

Uhuru will no doubt support a presidential candidate in the next election. But he might refrain from backing anyone openly—given the divisiveness of the succession race—in order to appear like a statesman.