Not true Raila is isolated, 2022 will not be Ruto vs One Kenya Alliance

•To dismiss such as a meeting of “party loyalists” who are “small fry from Luo Nyanza” is disingenuous at best, and an unnecessary smear that betrays the writer’s motives at worst.

•That any of these parties are dominated by people from their respective strongholds in leadership is nothing to write home about; they are and that is not anything distinctive to one party. 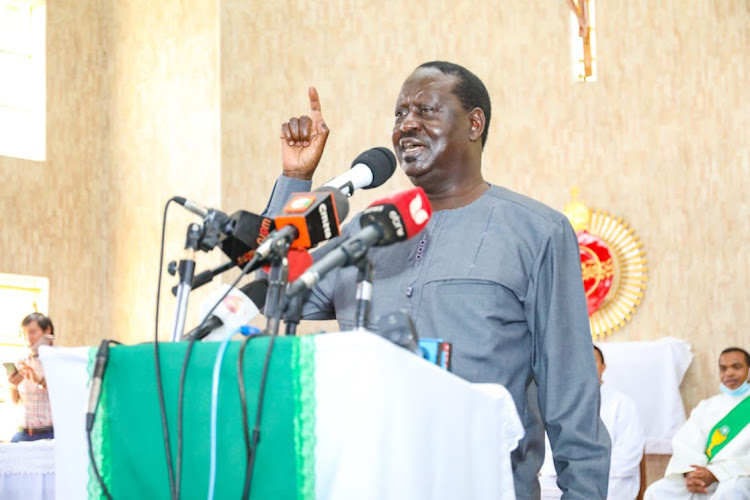 In his piece appearing in the Star this weekend, its writer Henry Makori makes a number of assertions that are factually and analytically correct, but others that fall short in both. Let us examine these one at a time.

The writer asserts the “clique of party loyalists surrounding [Raila] was mostly small fry from Luo-Nyanza.” This is in reference to a recently circulated photo of Raila and his ODM leadership team who he met at his Karen residence.

A post accompanying that photo noted the meeting was focused on the “ongoing vaccination campaign and containment measures against COVID-19, the state of the economy and its impact on Kenyans and political developments in the country.”

To dismiss such as a meeting of “party loyalists” who are “small fry from Luo Nyanza” is disingenuous at best, and an unnecessary smear that betrays the writer’s motives at worst. That any of these parties are dominated by people from their respective strongholds in leadership is nothing to write home about; they are and that is not anything distinctive to one party.

Ditto asking as the writer does whether “secretary general Edwin Sifuna (sic) and treasurer Timothy Bosire (sic) count even at home?” That is an irrelevant question that shows a basic misunderstanding what role party leadership plays as opposed to those tasked with whipping votes or base support.

The writer says “Baba’s national footprint has shrunk. His allies have abandoned him to seek new friends.” This is one of those assertions that on its face appears factual but is faulty when subject to deeper analysis because even though Raila is not in the same footing as he was in 2007 or even 2013, to jump from there to a conclusion Raila is therefore finished is a mistake anyone, including the president himself or the system can make and live to regret.

Put another way, Raila’s “footprint” may have shrunk, but that makes him no less a force to reckon with as he has always been and underestimate him at your own peril and this is something not lost to Uhuru or those minding the store.

The writer claims the “Coast has broken away to cobble together a region-based political vehicle.” This is just not true.

While it may be the case there have been noises about the Coast forming a new party to wrestle to diminish ODM, the dynamics are this is just not feasible and any effort to undertake such a project will backfire and no one knows that better than the same leaders mentioned as leading or trying to lead the effort. Yes, Uhuru may have met with the Coast governors to explore this possibility, but wiser wisdom is these governors cannot cross Raila in coast, even at the behest of the president.

That is not to say they cannot or will not try to; politicians make dumb moves all the time and live to regret or pay the price later and if in doubt, ask Musalia Mudavadi when it comes to Raila and crossing or jumping ship from the vessel Raila has always captained and sailed through the storms.

The writer then shares this:

“Western, Eastern and parts of the Rift Valley are bases of the new One Kenya Alliance (OKA) of Musalia Mudavadi (ANC), Kalonzo Musyoka (Wiper) and Gideon Moi (Kanu),” adding the “coalition has been energized by its by-election wins in Matungu and Machakos. It is also said to enjoy support from State House.”

This is another half-truth. It is simply not accurate to say this One Alliance outfit has “base” in the areas the writer claims because a base connotes an area where one is supreme and that obviously cannot be said to be the case here.

Yes, the tribes that support OKA come from those areas but Uhuru, Raila and Ruto also have support in the same region that singly or collectively dwarfs whatever support OKA has or dreams to have there.

The writer contends that Mt Kenya bloc “isolated and uncertain – but firmly united in its rejection of Raila.” This is a naïve assertion because Mt. Kenya will never be isolated from anything when it comes to power in Kenya. Yes, one can say there is greater uncertainty this time around because there is no known or declared presidential candidate but that will change overnight when Uhuru (a) decides to extend his time in office or (b) backs anyone for the presidency.

If Uhuru decides to back Raila for 2022, then it will be irrelevant whether Mt. Kenya is “firmly united in rejection of Raila;” in fact, by supporting Raila, that “firmly” will melt to pockets of opposition by diehard tribalists who have sworn they will never support Raila—or a Luo for that matter as president.

Fortunately, that number is less than what Raila would need to win the presidency for he has previously won without them and will certainly make it with Uhuru’s support as substitute to Raila’s reduced “footprint” to borrow the writer’s take on the situation.

Yet, the writer failing to recognize this fact, contends that a “scenario similar to 2002 could unfold if Uhuru, having ditched Deputy President William Ruto, endorses Raila whose political fortunes have dwindled nationally following the handshake.”

The writer then goes on to repeat the fallacy that Raila “is unelectable in Mt Kenya, the Rift Valley, Western, Coast and Northeastern” and tops off the fallacy in his claim that Raila’s following is “limited to Luo-Nyanza and sections of Nairobi”—all figments of the writer’s imagination and nothing based on fact.

Let me make it clear for those not following what the point is here: Were Uhuru to back Raila for 2022, Raila will be our next president. Were Uhuru to betray Raila and back someone else for the presidency, the system’s preferred choice will be our next president and we will have 2007 or 2013 all over—unless that candidate is one Raila endorses or acquiesces to by way of a deal with Uhuru.

The writer posits it is “highly unlikely any major politician will enter a coalition with Raila now.” At least the writer acknowledges this is just speculation for neither he nor anyone else can predict with any certainty who is to align with who in the weeks and months ahead of 2022.

The writer contends Raila’s “best years are behind him,” which, again, is an half-truth because Raila certainly has it in him to vie and yet again win the presidency though I am on record saying this can only be realistic if Uhuru backs him.

Finally, the writer tells us why he penned this piece and that is to tout Ruto:

“With Raila’s chances of winning the presidency in his fifth attempt getting slimmer by the day, One Kenya Alliance will be the formidable challenger to the clear frontrunner in the 2022 race – William Ruto.

Few will disagree that OKA is not and cannot be a “formidable” challenger to either Raila or Ruto; were Uhuru and the system to try and force them down our throats, then count on Rail and Ruto teaming up and delivering another tsunami to bury them.

The way I see it, Uhuru has the choice of keeping the path he is with Raila and the handshake, or everything else would be undesirable and not good for him specifically and the country at large.

It is a simple decision one can make and put the money on the former being the case if you are a betting person. Or simply stay tuned and it shall all come to pass.