Ethnicity – including who wants to be linked with whom – has played a very important role in fixing boundaries of units for administration and devolution.

• Like most other African countries, Kenya is a creation of colonial policy. The very fact of a colonial takeover must create strong senses of identity.

• If somebody invades what you think of as your land, you will naturally think very hard about who you are as well as who they are. 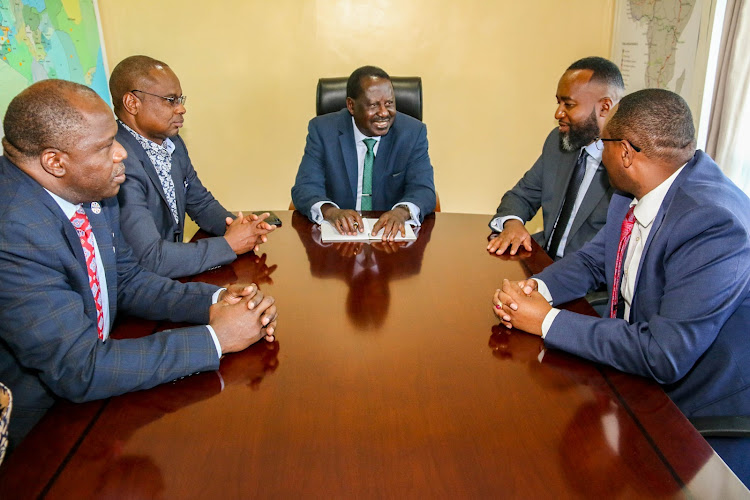 The Standard this week spoke about the BBI and how politicians were “marinating” positions. The use of this word is mysterious; perhaps they meant politicians are cooking up positions!

Its assumption that we are moving towards a system — favoured by Raila Odinga — in which 14 regional governments are added to the 47 counties is particularly interesting.

The Standard explained that particularly in Central Kenya (that codeword for 'Kikuyus') there had always been resistance to a level of government between the counties and the national. It smacks of majimbo — that system of government adopted at Independence, though with the utmost reluctance by Kenyatta I and rejected by him at the earliest opportunity.

VISION OF THE CONSTITUTION

The Constitution makers’ idea was not to deny that people are members of many ethnic groups, and feel pride in this. The Preamble portrays diversity as a source of strength, not of weakness. While Kiswahili is the national language (and English an official one) other languages are to be promoted. People have a right — with others — to enjoy their cultures. The dominance of particular groups, to the exclusion of others, is to be avoided. Minorities within counties must not be discriminated against, and everyone must be able to participate in the national life and in public life and be presented. Ethnic political parties are prohibited.

On the positive side, national unity and patriotism are national values.

Devolution was intended to be part of this. It would “foster national unity by recognising diversity” and “recognise the right of communities to manage their own affairs and to further their development”.

Like most other African countries, Kenya is a creation of colonial policy. The very fact of a colonial takeover must create strong senses of identity. If somebody invades what you think of as your land, you will naturally think very hard about who you are as well as who they are.

Then as you are pushed into closer connection with other people, with whom maybe you had quite amicable — or maybe no — relations in the past, senses of identity will probably be further sharpened. This sense was often made more acute because of the colonial powers’ fixations with tribes. Colonial officers were often, or became, amateur anthropologists. Colonial policy attributed certain characteristics to certain tribes. Some were 'martial\, some (especially in India) were 'criminal', for example. Colonial officers became attached to particular communities.

Dividing the country into provinces and districts for administrative purposes, and in Kenya confining many African communities to limited reserves, only enhanced senses of identity, not to mention resentment. And being unable to move around without a pass does not help a sense of unity.

Provinces tended to be groupings of ethnic communities and the boundaries of some provinces changed a good deal during the first half of the twentieth century. For example, a late change took Machakos and Kitui out of Central Province (where they were yoked with the Kikuyu) and joined them with Maasai districts to form Southern Province.

When independence was imminent, a commission was established to fix the boundaries of six regions for the majimbo system. Its principles were to keep existing provincial boundaries, if there was no good reason to change, and to respect the wishes of the people as far as possible.

This will give you a flavour of the sort of submissions they received:

The new regions were Nairobi, Coast, Eastern, Central, Rift Valley and Nyanza. Meanwhile, another commission looked at the Northern Frontier District and found that the Somali and a small number of others favoured joining the republic of Somalia, not staying with Kenya. Other groups favoured staying with Kenya — and being Muslim or not was a significant factor in their decisions.

The outcome of this was a new region — North-East. But no secession for the Somalis, and eventually the 'Shifta rebellion'. Soon — as majimbo was demolished — the regions became provinces, to which people still sometimes refer, and which are now once again called regions, to which the 'Regional Commissioners' are assigned, in the rebranded Provincial Administration.

All these exercises were heavily ethnicity-based, though the regions/provinces necessarily included a number of ethnic groups. The Districts were very much based on ethnicity, with over half the population living in districts where over 90 per ent  were from a single group.

By the time the National Constitutional Conference sat (2003-04), some things had been changing. Population shifts meant that districts were a little less dominated by single communities. And President Moi had created a large number of new districts — he went on doing so and Kibaki followed suit. The motive was mainly for electoral benefits. By the time Bomas met, there were 74 districts.

The Bomas proposals were for 13 regions, and 70 districts, plus Nairobi. The districts would have had very similar powers as they do today — but actually more in connection with education.

Had the Bomas draft been adopted, it would have been expensive. Would it have been any less ethnic? The regions would have been less ethnically diverse than the older, larger provinces. And at Bomas a similar process of insisting on being with one group or not being with another had taken place as before the Regional Boundary Commission in 1962. Districts being small would similarly have been less diverse. Being less diverse means fewer minorities. Whether this is a good or bad idea is a matter for debate.

THE COMMITTEE OF EXPERTS

Initially the CoE would have kept the eight existing provinces as an intermediate level of government — partly because being larger they would be stronger vis-ả-vis the national government. Eventually, they decided that even these were unnecessary — expensive and perhaps not having a very clear role.

However, the CoE reduced the number of counties to 47. This takes us back to the districts finalised around the time of independence, very much based on ethnicity. Had we had 70 or so clearly they would have been weaker — in terms of both capacity and ability to stand up to the national government — and have added to the expense of the system.

Clearly ethnicity — including who wants to be linked with whom — has played a very important role in fixing boundaries of units for administration and devolution. Underlying much of the concern has been issues of land. And sometimes resentment about the way groups have been treated by others.

The BBI report said: “Perhaps there is a way that the 47 counties can be maintained as the focus of development implementation and the provision of services, while representation and legislation are undertaken in larger regional blocs.”

Would reintroducing regions do anything to (i) reduce cost (ii) make government less ethnic or (iii) make government more effective? Would the residents of counties be prepared to see a good deal of power transferred to the regions, including giving up electing representatives at the county level?

This is a most complex matter. Have we identified what the problems are, let alone how to fix them?

So long as we don’t do this, there will continue to be suspicion that this is all about jobs for politicians, nothing more.