• US renewed interest in Somalia in relation to regional peace should worry Kenya. 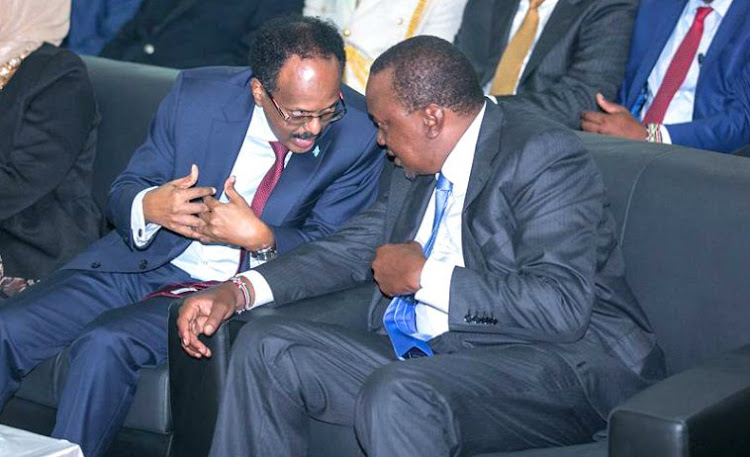 President Farmajo (L) with Kenya's President Uhuru Kenyatta (R) ahead of his swearing in Wednesday in the Somali capital, Mogadishu.
Image: PSCU

On March 22, 2019, media reports indicated that a rather high profile visit by American government officials had taken place in Mogadishu. The US Envoy to Somalia Donald Yamamoto together with the commander of the US Africa Command (AFRICOM) General Thomas Waldhauser had held talks with Somalia Prime Minister Hassan Ali Khaire and senior military and government officials.

The talks bordered on security partnerships in the region with a particular emphasis on the US Africa Command’s interest in the development of the Danab Advanced Infantry Brigade in Somalia.

The brigade described, as the most advanced infantry units on Somalia will have five battalions and a brigade headquarters at Baledogle Military Airfield. The US officials observed that Somalia was critical to the security situation and the long-term stability of the East Africa region.

On the same day and unnoticed, the Arab League states made history in Switzerland after failing to vote against Israel as has been the practice for many years. Somalia abstained on a resolution on Israel’s occupation of the Golan Heights in Syria.

Somalia’s unprecedented abstention on draft resolution A/HRC/40/L4 titled ‘Human Rights in the occupied Syrian Golan’ pricked significant interest. The Somalia government was later to issue a statement reiterating “its firm position that the Golan Heights are Syrian territory illegally occupied by Israel. Any recognition of Israeli sovereignty over Golan is not only null and void and violates international law but increases tension in the Middle East and undermines peace, security and stability.”

The actions of the Somali diplomats at the United Nations meet led to the recalling of Ambassador Faduma Abdullahi back to Mogadishu and the firing of Abdullahi Doolfor his personal remarks on twitter.

On April 9, the Somalia government led by Khaire approached the Bretton Woods institutions seeking for the cancellation of its debts estimated to be about five billion US dollars. Since the 1990s when war broke out, Somalia has never been able to review its borrowing with the two institutions of the World Bank and the International Monetary Fund.

During meetings attended by new World Bank President David Malpass and IMF Managing Director Christine Lagarde, a senior World Bank official Kristalina Georgieva posted on her twitter handle, “an important meeting with Somali Prime Minister Hassan Ali Khaire. Your country is making great progress and we at the World Bank stand ready to support you and the people of Somalia at this crucial moment for the country.”

On the same day, the US National Security Advisor John Bolton met the Somalia Premier at the White House in a meeting also attended by the Norwegian Minister of International Development, Dag Inge Ulstein eliciting eyebrows in Kenya taking into consideration the various partners interested in the recently auctioned gas exploration blocks belonging to Kenya on the Indian Ocean.

It is worth recalling that in 2018, the US re-established its diplomatic relations with Somalia and at the same time extended by a year a presidential declaration of a national emergency on Somalia calling the Islamist insurgency that has plagued the country an “unusual and extraordinary threat to the United States.”

The US has committed to “bringing back its troops home” as it withdraws its forces from various hotspots in the world including Somalia, Syria and Afghanistan. The US Operational Forces has been embedded in the Somalia National Army in the fight against militant Al Shaabab through the Danab Advanced Infantry Brigade, a fight that is ‘supposed to protect and defend American interests in the East African region through her allies Kenya and Ethiopia.’

Shockingly when the United Nations sought to include and list Al Shabaab as a terrorist group under UNSC Resolution 1267, only China, Somalia, Djibouti, Ethiopia, Uganda and Burundi voted with Kenya while the United States and United Kingdom vehemently opposed the listing.

Terrorism is acknowledged as a global threat with al Qaeda, ISIL and their affiliates listed by the UN as such. Al Shabaab pledged its allegiance to al Qaeda in 2010 before the UN listed it in 2012.

At what point then did America decide to ‘protect her interests’ in the East African region that is constantly being bombarded by the Al Shabaab terror attacks? Why is it that Kenyans have never questioned through Parliament or the Head of State why the two respective ambassadors failed to support Kenya in such an important matter as war on terror?

Why should Kenya bear the brunt of terror? Who will then defend the territorial integrity of Kenya considering that some countries are attempting to do so? But, I deviate from the subject matter.

While the world has been watching some of these unrelated activities keenly, pundits are left wondering what Kenya thinks of the same especially coming after the Kenya military troops attached to AMISOM started withdrawing from their military base in March and headed back to the Kenya Somalia border as well as the largely unspoken concerns of the maritime case at the International Court of Justice scheduled to commence hearing in September.

Many are questioning what has suddenly led the Somalia Federal Government to seek financial and material assistance from other states at this particular time. Why is it that the Kenyan government has not stopped to tell Kenyans what it intends to do as the September date approaches as it did during the leaders of government had to stand before the International Court of Justice?

Are all these events part of normal diplomatic relations with little effect on Kenya? As Kenyans, we deserve answers from our leaders. How is it that events happening across the world that affect us directly and indirectly are not being discussed at the national platform?

The interests of Kenyans cannot be taken for granted by our leaders and other countries.

The anticipated withdrawal of troops from Somalia by the United States and Kenya is expected to trigger a flurry of activities keeping in mind that Somalis in the US have another eight months to go until March 17, 2020 to re-register to stay in the USA under the Temporary Protected Status (TPS) thus saving close to 500 families from deportation.

The 18 month-extension made in July 2018 by the US Department of Homeland Security (DHS) allows for voluntary return to Somalia or another country or deportation after the expiration of the extension.

Those that chose to stay are constantly reminded of their pending deportation while many others have opted to move closer home if the recent population explosion in East African countries is anything to go by.

Interestingly, the temporary status program has since the entry of the Donald Trump administration ended the stay in the US of citizens from El Salvador, Hondurus, Haiti, Nicargua and Sudan.

What does the TPS program mean for Kenya in particular? How will Kenya stem the flood of new settlers from the US and perhaps other countries that are implementing similar programs?

What ever happened to the closure of the Dadaab refugee camp? Is the State Department of Immigration willing to tell Kenyans how many foreigners it has registered? How does the government monitor activities at its points of entry while reassuring Kenyans of the protections of the interests of Kenya and Kenyans?

The government has bowed to pressure to postpone the closure of the Dadaab refugee camp, six months after it vowed to shut it down by the end of ...
News
5 years ago

Considering that the country is rolling out the Huduma Namba as well as the August 2019 National Population Census, what are the expectations of Kenyans? Who can tell Kenyans what is going on?

February 2019 witnessed the African Union calling for the gradual transfer of security responsibilities from AMISOM to agencies of the Federal Government of Somalia. This was part of attempts to meet the December 2021 date for transferring responsibility under UN Security Council Resolution 2431(2018).

The Resolution calls for the development of a conditions-based transition plan with clear target dates for the progressive transfer of security responsibilities from AMISOM to the Somali security institutions and forces, as agreed at the Somalia Partnership Forum in Brussels on 16–17 July and as adopted by Somalia and international partners on 11 May 2017 at the London Somalia Conference.

The resolution recognises that a more stable Somalia is of vital importance to ensuring regional security. It further noted that while conditions in Somalia were not appropriate for the deployment of a United Nations peacekeeping mission, it authorised the Member States of the AU to maintain the deployment of AMISOM until 31 May 2019, a date that is close at hand.

There have been fears that this withdrawal of troops may not have the anticipated results due to a return to clan hostilities as narrow interests and trade patronage for power reminiscent of the past begin to re-surface.

This is further compounded by the divided loyalties amongst the clans of militia groups including Al Shabaab that are controlled by factional leaders and businessmen. Even with a functional parliament located at the airport, it is feared that many of its members whose high salaries are paid for by international agencies have never travelled far from it due to insecurity.

With a weakened security infrastructure following the exit of the combined military forces, it is yet to be seen how the government will meet the expenditure of its budgets including salaries for its officers.

Speculations is rife that criminal activities may re-surface to provide the badly needed cash that will hold the government together. The recent licensing of Chinese fishing vessels on Somalia waters as well as the auctioning of oil and gas blocks in disputed maritime territory are believed to prepare funding for election campaigns scheduled for 2020 thereby complicating an already delicate situation.

It can be assumed that the region is bound to witness an escalation of illegal activities such as piracy, money laundering, including wildlife crimes amongst the neighbouring Horn of Africa countries of Ethiopia, Eritrea, Somalia and Djibouti.

990km Kenya-Uganda border to be demarcated

The government has maintained that it will not cede even an inch of its soil to anyone or any state. Foreign Affairs CS Monica Juma on Thursday ...
News
2 years ago
by OLIVER MATHENGE Digital Editor
Opinion
23 April 2019 - 11:03