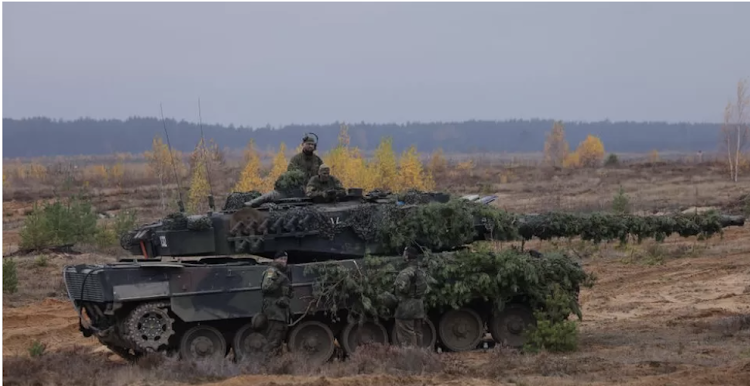 A German Leopard tank during exercises

It insists they can make all the difference - helping to push Russia back from Ukrainian territory and handing Kyiv the initiative.

Germany produces the vast majority of modern heavy tanks in Europe - the Leopard 2s. Around 2,000 of them are spread out amongst European allies. And Germany owns all the export licenses for them.

This meant that while it dithered, others like Poland - desperate to deliver tanks to Ukraine as soon as possible - were prevented from doing so. They lacked the green re-export light from Berlin.

Ukrainian soldiers still need to be trained in how to use the vehicles, of course, and it's unclear how many and how soon they might arrive for use in Ukraine.

But Berlin's prolonged hesitance, even as Russia committed human rights abuse after human rights abuse in Ukraine, led to huge pressure amongst Western allies who, up until now, had been oh so keen to display a determined sense of unity in the face of Russian aggression.

Chancellor Scholz's indecision divided his country too, including his governing coalition and even his own Social Democrat Party. "Free the Leopards!" was the slogan shouted at regular demonstrations outside the German parliament, while inside the debate to send, or not to send tanks, raged amongst German MPs.

What was it then, causing Olaf Scholz so much consternation?

Of huge significance is the weight of history felt by German modern-day leaders. It can't be over-emphasised.

This Friday is Holocaust Memorial Day. A huge sign proclaiming "We Will Not Forget" hangs at the Reichstag in Berlin.

As the aggressor in two world wars, many Germans are wary of being the main provider of battle tanks in Ukraine.

The "Zeitenwende" or "turning point" in Germany, announced by Chancellor Scholz soon after Russia invaded Ukraine, is hugely significant. For Germany itself but also Europe as a whole.

Berlin promised to massively invest in its depleted, outdated military and to take a far more assertive role in European defence. A real break with Berlin's post World War Two timidity and preference for allies to lead in security matters.

This "transformation" has been peppered by setbacks and is by no means complete but it is certainly under way and that is a big change for Germany.

Since World War Two, Berlin has been reluctant to take the lead, but as the Europe's biggest economy, that's exactly what allies often look to Germany to do.

Other issues with sending tanks

Returning to the tank debate, another sensitivity for Germany to overcome is that their Leopard 2s would be used against Russian soldiers.

Germany feels deep responsibility for the slaughter of millions of Russians during World War One and Two.

A further, not entirely separate issue, is that large sections of German society - particularly in the formerly communist east of the country, where many express a disappointment in how western society functions - feel traditionally close to Russia.

NGOs monitoring Russian disinformation in Europe. report that many Germans are fallible.

That said, the overwhelming majority of Germans sympathise with ordinary Ukrainians caught up in the current conflict.

But in a survey shortly before Christmas, 40% of Germans who took part said they understood the Kremlin's blaming of the West for its invasion of Ukraine - because of the eastward expansion of the Nato military alliance.

Olaf Scholz is an avowed transatlanticist but his SPD party historically - though far from entirely, these days - looks east to Moscow, with many party members a bit suspicious of the US and its Nato dominance.

For all these reasons - and a few more I'll illustrate - Chancellor Scholz didn't want Germany to go it alone, nor be the central facilitator on the battle-tanks-to-Ukraine front.

Another German concern has been that, while European countries including the UK, Poland and the Netherlands, say it's clearly the Kremlin that is escalating this conflict, many in Germany say they fear delivering heavy tanks and other offensive weaponry to Ukraine could push Vladimir Putin to even wilder extremes. Even the use of nuclear weapons.

It's thought one of the reasons Chancellor Scholz has pushed so hard for Washington to also send tanks to Ukraine is so Europe can feel that nuclear power US on board and by its side.

Overall, Olaf Scholz didn't want Germany to stand out and alone in being the main provider of heavy tanks to Ukraine.

His sudden U-turn could well be because he realised if he continued to hold those tanks back, he could find himself isolated amongst his own allies.

Something else to bear in mind is that, despite the current and previous controversies over foot-dragging by Chancellor Scholz in providing and enabling the delivery of other military equipment, Germany is amongst the top three single donors of military aid and one of the main providers of humanitarian aid to Ukraine.