Rwanda-DR Congo tension: Shooting of plane an ‘act of war’

DR Congo, the US and UN experts accuse Rwanda of backing the M23 rebel group. 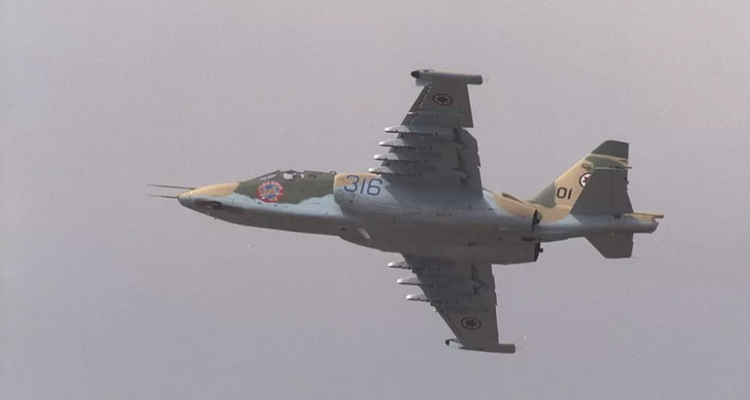 DR Congo has declared Rwanda's shooting of one of its fighter jets an "act of war", amid mounting tensions.

Rwanda's government said it took "defensive measures" against a plane that had violated its airspace - a claim denied by DR Congo.

Although the plane landed safely, this is a major escalation following months of conflict in DR Congo, which has forced 400,000 people from their homes.

DR Congo, the US and UN experts accuse Rwanda of backing the M23 rebel group.

Rwanda has denied this and blames the Congolese government for the unrest in mineral-rich eastern DR Congo.

In the 1990s, Rwanda twice sent troops into its much larger neighbour, sparking a huge conflict involving at least nine countries that led to the death of millions of people.

Images shared on social media show a Sukhoi-25 aircraft being shot at while flying at low altitude between the towns of Goma in DR Congo and Gisenyi in Rwanda, which straddle their common border.

Other images show water being used to put out a fire on the plane's right wing after it landed at Goma airport. DR Congo says the plane suffered no "major material damage".

In a statement, DR Congo's government accused Rwanda of "sabotaging" the implementation of a recent peace process agreed upon by the opposing sides in recent talks.

The Information Ministry went on to say that DR Congo "reserves the right to defend its national territory and will not be threatened".

"The government considers this umpteenth attack by Rwanda as a deliberate action," the ministry said.

However, Rwanda said this was the third incident involving a Congolese fighter jet in its airspace and asked its neighbour "to stop this aggression".

Could this lead to war?

This is the closest the two countries have come to a direct confrontation in recent years.

The suspicions and tensions date back nearly three decades and are a spill-over of the 1994 Rwanda genocide in which more than 800,000 people were killed - mostly ethnic Tutsis and moderate Hutus.

Some of those responsible fled into what is now DR Congo, as a largely Tutsi rebel group led by Paul Kagame, now Rwanda's president, took power.

Rwanda said it sent its troops into DR Congo to stop attacks by Hutu militias but its troops were also accused of looting the region's mineral riches, as were the forces of other countries which intervened.

Those tensions remain unresolved to date with sporadic escalations over the years, however in recent weeks, they have intensified significantly.

While denying allegations of backing the Tutsi-dominated M23, President Kagame has also questioned why no-one is talking about a separate rebel group it accuses DR Congo of backing - the Democratic Forces for the Liberation of Rwanda (FDLR), which includes some of the alleged leaders of the genocide.

The M23 has taken control of several towns and villages in the North Kivu province in the past year.

The forces of several east African countries have joined the Congolese army, with the support of UN peacekeepers, in fighting against the group.

Earlier this month, its leaders agreed to a ceasefire and to withdraw from territory it had taken but fighting broke out once again on Tuesday morning, hours before the Congolese fighter jet was shot at.