It comes amid growing diplomatic tension between the two countries. 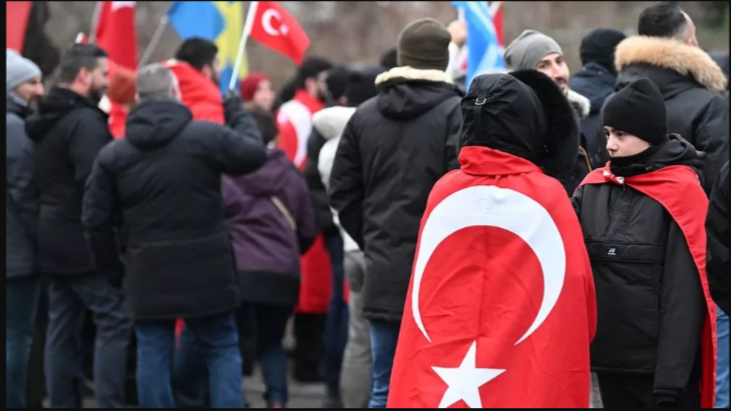 Turkey has condemned the burning of a copy of the Quran during a protest in Sweden, describing it as a "vile act".

It said the Swedish government's decision to allow the protest to go ahead was "completely unacceptable".

It comes amid growing diplomatic tension between the two countries.

Turkey, which had appealed to Sweden to stop the protest, earlier called off a visit by Sweden's Defence Minister, Pal Jonson, saying the trip had "lost its significance and meaning".

It was hoped the trip could dispel Ankara's objections to the Scandinavian country joining the Nato military alliance. Turkey has so far held up both Sweden and Finland's Nato applications.

Turkey wants political concessions, including the deportation of critics of its President, Recep Tayyip Erdogan, and Kurds that it claims are terrorists.

Turkey is already a Nato member, which means it can block another country from joining. Sweden and Finland both applied to join Nato after Russia invaded Ukraine.

Rasmus Paludan, a politician from the far-right Stram Kurs (Hard Line) party, burnt a copy of the Quran during the protest on Saturday afternoon outside the Turkish embassy in Stockholm.

Muslims consider the Quran the sacred word of God and view any intentional damage or show of disrespect towards it as deeply offensive.

Turkey is a majority Muslim country. Its Ministry of Foreign Affairs issued a statement denouncing the act, which it said happened despite "repeated warnings".

"Permitting this anti-Islam act, which targets Muslims and insults our sacred values, under the guise of 'freedom of expression' is completely unacceptable," it said.

It added that the burning of the Quran was another example of the "alarming" extent to which Islamophobia, racism and discrimination had reached Europe, and it called on the Swedish government to take "necessary measures".

Separate protests both in support of and against Turkey were also held in the capital.

After Turkey cancelled the Swedish defence minister's trip, Mr Jonson tweeted: "Our relations with Turkey are very important to Sweden, and we look forward to continuing the dialogue on common security and defence issues at a later date."

Demonstrators in Stockholm last week hung an effigy of President Erdogan from a lamppost in what Sweden's Prime Minister said was an effort to sabotage Sweden's Nato application.

Mr Paludan held rallies last year at which he threatened to burn the Quran, sparking riots.