The family statement did not specify what cancer she had.

•Earlier this year she was unveiled as the performer inside the "Baby Mammoth" character costume on the US version of The Masked Singer.

•Alley was married twice, once to the actor Parker Stevenson with whom she adopted two children. 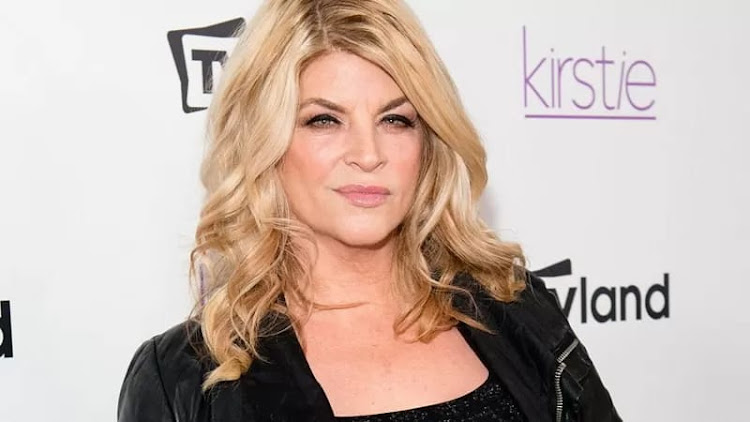 Actress Kirstie Alley, best known for her role in the comedy series Cheers in the 1980s and 90s, has died of cancer at 71, according to a family statement.

"We are sad to inform you that our incredible, fierce and loving mother has passed away," her children wrote.

Alley won an Emmy award and a Golden Globe for her role as a pub manager and waitress on the popular TV series.

The Kansas-born star also appeared in the Look Who's Talking film series and the TV sitcom Veronica's Closet.

The family statement did not specify what cancer she had, but said it was "only recently discovered".

"She was surrounded by her closest family and fought with great strength, leaving us with a certainty of her never-ending joy of living and whatever adventures lie ahead," it continued.

"As iconic as she was on screen, she was an even more amazing mother and grandmother."

They also praised her "zest and passion for life, her children, grandchildren and her many animals, not to mention her eternal joy of creating".

First appearing as a strong independent woman, her character repeatedly had failed romances, often with rich men, becoming more insecure and frustrated as a result.

She appeared in 147 episodes after joining the show at the height of its popularity in 1987 and continued to appear until its end in 1993.

In a statement to Deadline, Danson said: "Her ability to play a woman on the verge of a nervous breakdown was both moving and hysterically funny.

"She made me laugh 30 years ago when she shot that scene, and she made me laugh today just as hard," he added, referring to having caught an old episode of Cheers on a flight this week.

"As I got off the plane, I heard that Kirstie had died," he went on. "I am so sad and so grateful for all the times she made me laugh. I send my love to her children. As they well know, their mother had a heart of gold. I will miss her."

Another castmate, Kelsey Grammer, who played the psychiatrist Frasier Crane, said he had loved the actress.

"I always believed grief for a public figure is a private matter, but I will say I loved her," he told the PA news agency.

In a separate statement provided to PA, Rhea Perlman, who played head-waitress Carla Tortelli, said she had "never met anyone remotely like" Alley and would miss her "very, very much".

"Kirstie was a unique and wonderful person and friend," Pearlman said. "Her joy of being was boundless."

She added: "We became friends almost instantly when she joined the cast of Cheers. She loved kids and my kids loved her too."

"I feel so thankful to have known her," she continued.

Speaking to US chat show host David Letterman in 1993, after having wrapped up filming on the final series of Cheers, Alley explained she had called a meeting of all the actors and director, pitching the idea that the show should return for six more episodes so "we go out with style and class and we don't let the fans down".

She jokingly explained how her best laid plans then fell apart as she began sobbing uncontrollably while delivering her pitch.

"It was like a group therapy session where people were saying this literally, 'go with it... let it out!'" she said.

"It was so degrading. Then I thought, screw you people are old and I'm young, I still have a career!"

Born in Wichita, Kansas, Alley dropped out of university and moved to Los Angeles to work as an interior designer and pursue her interest in Scientology.

She made her film debut in 1982 in Star Trek II: The Wrath of Khan.

Following her success in Cheers, Alley starred alongside John Travolta in the family rom-com film series, Look Who's Talking.

Travolta took to Instagram to pay his respects. "Kirstie was one of the most special relationships I've ever had. I love you Kirstie," he wrote alongside a photo of her. "I know we will see each other again."

In 1993, Alley won a second Emmy for best lead actress, for the TV movie David's Mother.

From 1997 to 2000, she starred as lead in the sitcom Veronica's Closet, earning additional Emmy and Golden Globe nominations for her role as the head of a New York City lingerie company.

She also featured in the 1999 film Drop Dead Gorgeous, a dark comedy about a beauty pageant.

Alley, who was a spokesperson for American weight loss management company Jenny Craig, gave a glimpse of the irony and humor with which she approached her battle to lose weight and get back on TV regularly in the 2005 comedy series Fat Actress.

And more recently, she worked with Jamie Lee Curtis on the satirical comedy horror Scream Queens.

Curtis posted online that the pair had had a "mutual respect and connection".

"She was a great comic foil in Scream Queens and a beautiful mama bear in her very real life. She helped me buy onesies for my family that year for Christmas.

"We agreed to disagree about some things but had a mutual respect and connection. Sad news."

Vocal Donald Trump-supporter Alley said, in an interview with Tucker Carlson on Fox Nation last year, that she was advised in 2015 to keep her political views private.

Having not done so, she claimed she was subsequently "blackballed" by Hollywood afterwards.

Reacting to the news of her death, Trump posted on Truth Social: "Kirstie was a great person who truly loved the USA. She will be missed!".

Alley's charms found a new audience later in her career as she appeared on a string of reality TV shows, finishing as runner-up on both Dancing with the Stars as well as the UK edition of Celebrity Big Brother

Earlier this year she was unveiled as the performer inside the "Baby Mammoth" character costume on the US version of The Masked Singer.

"I've done a lot of things in my career," beamed the animal-lover, "but I've never gotten to be in the circus!".

Alley was married twice, once to the actor Parker Stevenson with whom she adopted two children.

Post a comment
WATCH: The latest news from around the World
by BBC NEWS None
World
06 December 2022 - 18:09
Read The E-Paper