The aid package is intended to counter Russian aerial attacks.

•Mr Sunak said it was "deeply humbling" to be in Kyiv and that the UK would continue to stand by Ukraine.

•"Since the first days of the war, Ukraine and the UK have been the strongest of allies," Mr Zelensky said following the meeting. 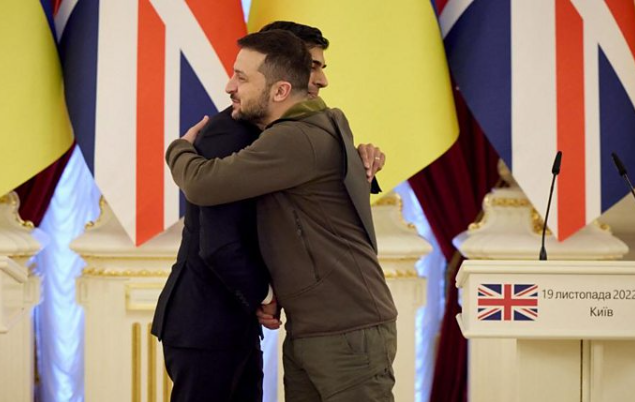 Rishi Sunak has pledged £50m in defence aid to Ukraine as he met President Volodymyr Zelensky in his first visit to Kyiv since becoming prime minister.

Mr Sunak said it was "deeply humbling" to be in Kyiv and that the UK would continue to stand by Ukraine.

"Since the first days of the war, Ukraine and the UK have been the strongest of allies," Mr Zelensky said following the meeting.

The aid package is intended to counter Russian aerial attacks.

On his visit the prime minister saw captured Iranian-made drones which have been used to target and bomb Ukrainian civilians in recent months.

Mr Sunak also laid flowers for the war dead and lit a candle at a memorial for victims of the 1930s Holodomor famine, before meeting emergency workers at a fire station.

The prime minister said: "I am proud of how the UK stood with Ukraine from the very beginning. And I am here today to say the UK and our allies will continue to stand with Ukraine, as it fights to end this barbarous war and deliver a just peace.

"While Ukraine's armed forces succeed in pushing back Russian forces on the ground, civilians are being brutally bombarded from the air. We are today providing new air defence, including anti-aircraft guns, radar and anti-drone equipment, and stepping up humanitarian support for the cold, hard winter ahead.

He added that it was "deeply humbling" to be in the Ukrainian capital and have the opportunity to meet people "paying so high a price, to defend the principles of sovereignty and democracy".

Mr Sunak's pledge to send more air defence support is exactly what President Zelensky would want to hear at a time when Russian airstrikes have destroyed nearly 50% of the country's energy infrastructure, according to the government in Kyiv.

The men's hopes for peace and a just outcome to the conflict may feel like distant prospects, but Mr Sunak's promise to hold a reconstruction conference for Ukraine next year in London will be good news for the government and companies, which desperately need access to international finance.

During the visit, Mr Sunak also confirmed £12m for the World Food Programme's response to Ukraine, as well as £4m for the International Organisation for Migration.

Ukraine has been requesting assistance from Western nations in recent months amid intense Russian aerial attacks on Kyiv and across the country.

Earlier in the week, Russia hit Ukraine with one of its biggest barrages of missiles yet, days after its troops were forced to withdraw from Kherson.

Kyiv was hit and there were strikes across the country, from Lviv in the west to Chernihiv in the north.

That attack coincided with the G20 summit in Indonesia this week where, in a virtual speech, Mr Zelensky said he was "convinced now is the time when the Russian destructive war must and can be stopped".

While Mr Sunak was at the Bali summit, which was attended by Russia's foreign minister Sergei Lavrov, the UK prime minister urged Russia to "get out of Ukraine" and condemned the country for its "barbaric invasion".

He stressed the UK would "back Ukraine for as long as it takes".

Britain is currently the largest provider of military aid to Ukraine aside from the US. So far the UK has committed about £2.3bn and has pledged to match that amount in 2023, according to the House of Commons library.

The UK is also hosting a programme which will aim to train 10,000 new and existing Ukrainian personnel within 120 days.

Mr Johnson became almost a cult figure in Ukraine, after he was one of the first international figures to publicly support Ukraine and send military assistance.

It is a tough comparison for Mr Sunak to live up to so early on in his premiership. Many people in Ukraine do not know the new prime minister well and they will want to see how committed he is to supporting the country.

Post a comment
WATCH: The latest news from around the World
by BBC NEWS None
World
20 November 2022 - 07:45
Read The E-Paper