UN alarm at Iran cracks down on anti-hijab protests

• The UN urged Iran's leaders to allow peaceful demonstrations and launch an impartial probe into the woman's death.

• In Tehran, videos posted online showed protests on Monday outside several universities and on Keshavarz Boulevard, a major road in the city centre. 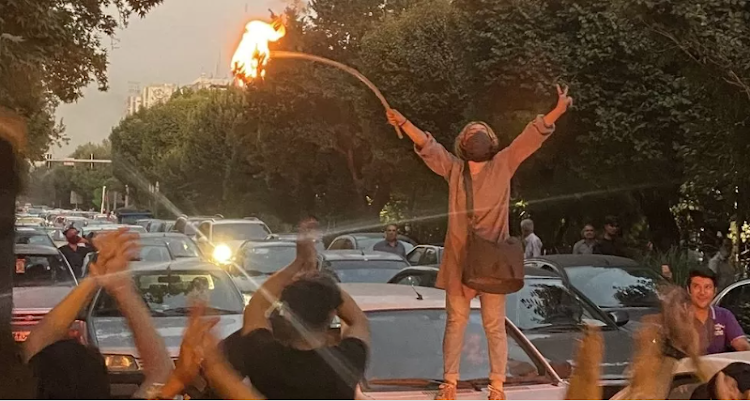 A woman set fire to her headscarf during a protest in Tehran on Monday
Image: BBC

The UN has expressed alarm at Iranian authorities' response to protests sparked by the death in custody of a woman detained for breaking hijab laws.

Human rights groups said three people were killed on Monday as security forces opened fire at men, women and children who took to the streets of Kurdistan province for a fourth day.

The UN urged Iran's leaders to allow peaceful demonstrations and launch an impartial probe into the woman's death.

Mahsa Amini, a 22-year-old from the western city of Saqez, who was from Iran's Kurdish minority, died in hospital on Friday after spending three days in a coma.

She was with her brother in Tehran on Tuesday when she was arrested by Iran's morality police, who accused her of breaking the law requiring women to cover their hair with a hijab, or headscarf, and their arms and legs with loose clothing. She fell into a coma shortly after collapsing at a detention centre.

Acting UN High Commissioner for Human Rights Nada al-Nashif said there were reports that Ms Amini was beaten on the head with a baton by morality police officers and that her head was banged against one of their vehicles.

The police have denied that she was mistreated and said she suffered "sudden heart failure". But her family has said she was fit and healthy.

"Mahsa Amini's tragic death and allegations of torture and ill-treatment must be promptly, impartially and effectively investigated by an independent competent authority, that ensures, in particular, that her family has access to justice and truth," Ms Nashif said.

She noted that the UN had received "numerous, and verified, videos of violent treatment of women" as morality police expanded their street patrols in recent months to crack down on those perceived to be wearing "loose hijab".

"The authorities must stop targeting, harassing, and detaining women who do not abide by the hijab rules," she added, calling for their repeal.

An aide to Iran's Supreme Leader Ayatollah Ali Khamenei paid a visit to Ms Amini's family on Monday and told them that "all institutions will take action to defend the rights that were violated", state media reported.

Senior MP Jalal Rashidi Koochi publicly criticised the morality police, saying the force was a "mistake" as it had only produced "loss and damage" for Iran.

What are Iran's hijab laws?

Following the 1979 Islamic Revolution, authorities in Iran imposed a mandatory dress code requiring all women to wear a headscarf and loose-fitting clothing that disguises their figures in public.

Morality police - known formally as "Gasht-e Ershad" (Guidance Patrols) - are tasked, among other things, with ensuring women conform with the authorities' interpretation of "proper" clothing. Officers have the power to stop women and assess whether they are showing too much hair; their trousers and overcoats are too short or close-fitting; or they are wearing too much make-up. Punishments for violating the rules include a fine, prison or flogging.

In 2014, Iranian women began sharing photos and videos of themselves publicly flouting the hijab laws as part of an online protest campaign called "My Stealthy Freedom". It has since inspired other movements, including "White Wednesdays" and "Girls of Revolution Street".

Ms Nashif also condemned "the reported unnecessary or disproportionate use of force" against the thousands of people who have taken in part in protests against the morality police and the hijab since Mahsa Amini's death.

Hengaw, a Norway-based organisation that monitors human rights in predominantly Kurdish areas, said 38 people were injured on Saturday and Sunday when riot police fired live ammunition, rubber bullets and tear gas at protests in Saqez and Sanandaj, the capital of Iran's Kurdistan province.

The group reported that three male protesters were shot and killed in clashes with security forces on Monday - one in Saqez and two others in the towns of Divandarreh and Dehgolan - as the unrest escalated. It had previously reported the death of a second man in Divandarreh, but relatives said he was in a critical condition in hospital.

In Tehran, videos posted online showed protests on Monday outside several universities and on Keshavarz Boulevard, a major road in the city centre.

Women were filmed taking off their headscarves and shouting "death to the dictator" - a chant often used in reference to the Supreme Leader. Others shouted "justice, liberty, no to mandatory hijab".

A woman who took part in a protest on Monday night in the northern city of Rasht sent BBC Persian photographs of what she said were bruises she suffered as a result of being beaten by riot police with batons and hoses.

"When we took to the streets to show our solidarity and anger the only thing they [the police] did was beat us," she said.

"They kept firing tear gas. Our eyes were burning," she added. "We were running away, [but] they cornered me and beat me. They were calling me a prostitute and saying I was out in the street to sell myself!"

Another woman who protested in the central city of Isfahan told the BBC's Ali Hamedani: "While we were waving our headscarves in the sky I felt so emotional to be surrounded and protected by other men. It feels great to see this unity. I hope the world supports us."

Tehran Governor Mohsen Mansouri tweeted on Tuesday that the protests were "fully organised with the agenda to create unrest", while state TV alleged that Ms Amini's death was being used as an "excuse" by Kurdish separatists and critics of the establishment.

Eyewitnesses said Mahsa Amini was beaten while inside a police van.
News
2 months ago

Abdi asked the Muslim community to accept Magoha's apology.
News
4 months ago
Post a comment
WATCH: The latest news from around the World
by BBC NEWS None
World
20 September 2022 - 22:01
Read The E-Paper