Participants in the last review in 2015 also failed to reach an agreement.

• China's ambassador, meanwhile, said despite the lack of agreement, the process was "an important practice of common security and genuine multilateralism". 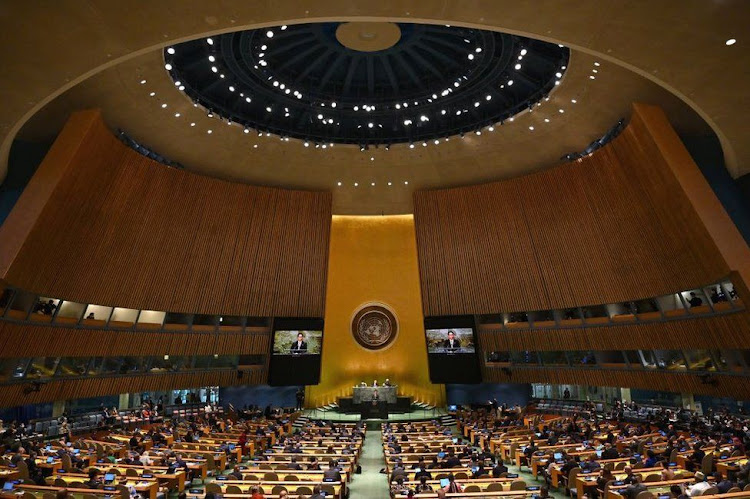 Participants in the review met at UN headquarters in New York, starting on 1 August
Image: BBC

Russia has blocked the adoption of a joint declaration by a United Nations conference on nuclear disarmament.

The Nuclear Non-Proliferation Treaty, which is reviewed by its 191 signatories every five years, aims to prevent the spread of nuclear weapons.

Participants in the last review in 2015 also failed to reach an agreement.

The 2022 meeting, which had been due in 2020, was delayed because of the Covid-19 pandemic. The failure to agree a joint declaration followed a four-week conference in New York.

Australian Foreign Minister Penny Wong said she was "deeply disappointed" at the lack of agreement.

"Russia obstructed progress by refusing to compromise on proposed text accepted by all other states," she said.

The US representative, Ambassador Bonnie Jenkins, said the US "deeply regrets this outcome, and even more so on Russia's actions that led us here today".

Russia was opposed to a section of the text expressing "grave concern" over military activities around Ukrainian power plants - including the Zaporizhzhia nuclear plant, which Russia seized early on in the war in Ukraine.

The draft section also remarked on "the loss of control by the competent Ukrainian authorities over such locations as a result of those military activities, and their profound negative impact on safety".

"Our delegation has one key objection on some paragraphs which are blatantly political in nature," he said - adding that other countries also disagreed with the text.

The final document needed approval of all countries at the conference. A number of countries, including the Netherlands and China, expressed disappointment that no consensus had been reached.

The Dutch said they were "content with the useful discussions", but "very disappointed that we have not reached consensus".

China's ambassador, meanwhile, said despite the lack of agreement, the process was "an important practice of common security and genuine multilateralism".

The International Campaign to Abolish Nuclear Weapons regretted that "in a year when a nuclear-armed state invaded a non-nuclear armed state, a meeting of nearly all countries in the world failed to take action on nuclear disarmament", while the Washington-based Arms Control Association said the conference represented a "missed opportunity to strengthen the treaty and global security".

The Non-Proliferation Treaty, backed by 190 countries in 1970, commits countries which signed up - including the US, Russia, France the UK and China - to reducing their stockpiles and bars others from acquiring nuclear weapons.

Last week, the Zaporizhzhia plant was temporarily disconnected from the power grid, raising fears of a possible radiation disaster.

Russia's military took control of the plant, the largest nuclear plant in Europe, in early March, but it is still being operated by Ukrainian staff under difficult conditions.

The UN's nuclear watchdog, the International Atomic Energy Agency (IAEA), is expected to organised a trip to the Zaporizhzhia plant in the coming days to inspects facilities there.

Last week, Russia said it would allow IAEA inspectors to visit the plant.

The incident had escalated tensions between the two nuclear-armed nations.
News
5 months ago