The Kremlin made the announcement after a call between Mr Putin and French President Emmanuel Macron.

• It came as claims of fighting near the plant continued, with four civilians reportedly injured by Russian shelling.

• Separately, the US pledged on Friday to send more arms and ammunitions to assist in Ukraine's war effort. 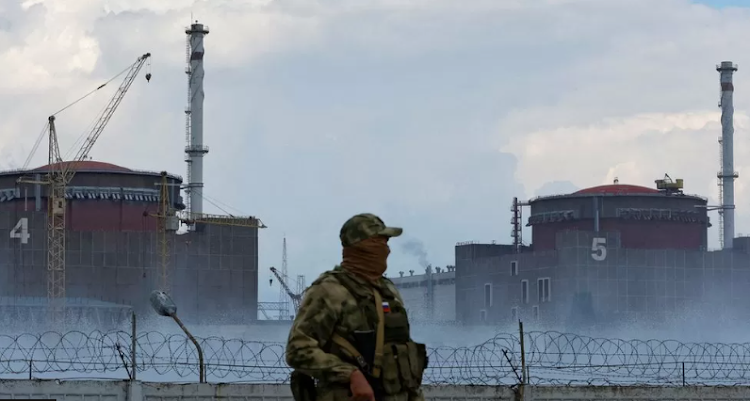 A soldier with a Russian flag stands guard near the Zaporizhzhia nuclear site
Image: REUTERS/BBC

Russian leader Vladimir Putin has said UN officials will be granted permission to visit and inspect the Zaporizhzhia nuclear complex.

The Kremlin made the announcement after a call between Mr Putin and French President Emmanuel Macron.

It came as claims of fighting near the plant continued, with four civilians reportedly injured by Russian shelling.

Separately, the US pledged on Friday to send more arms and ammunitions to assist in Ukraine's war effort.

In a read-out following the call between the French and Russian leaders, the Kremlin said, Mr Putin had agreed to provide UN investigators with "the necessary assistance" to access the Zaporizhzhia nuclear site.

The plant has been under Russian occupation since early March but Ukrainian technicians still operate it under Russian direction.

"Both leaders noted the importance" of sending the IAEA experts to the plant for an assessment of "the situation on the ground", the Kremlin said.

The director-general of the UN's nuclear watchdog, the International Atomic Energy Agency (IAEA), welcomed Mr Putin's statement and said he was willing to lead a visit to the plant himself.

"In this highly volatile and fragile situation, it is of vital importance that no new action is taken that could further endanger the safety and security of one of the world's largest nuclear power plants," Rafael Grossi said.

Ukrainian President Volodymyr Zelensky welcomed the prospect of an inspection in his nightly address, but said specific details were still being worked out.

"If Russian blackmail with radiation continues, this summer may go down in the history of various European countries as one of the most tragic of all time," he said.

Kyiv says Russia has turned the complex into an army base - deploying military equipment, weapons and about 500 troops who are using the site as a shield to attack towns across the Dnieper River.

And in recent weeks, the area around the facility has come under heavy artillery fire, with Kyiv and Moscow blaming each other for the attacks.

Ukrainian officials claimed that Russian shelling of the area surrounding the plant had continued on Friday, accusing Moscow's forces of wounding four civilians in the city of Marhanets, which is across the river from the plant.

Despite displaying some willingness to grant access to inspectors, Russian officials have flatly refused international demands to demilitarise the site.

Ivan Nechayev, deputy director of the Russian foreign ministry's information and press department, said on Friday that such moves would leave the plant "even more vulnerable".

Meanwhile, Russia submitted a letter to the UN Security Council detailing the "provocations" that it accuses Ukraine of plotting at the Zaporizhzhia nuclear power plant.

The Russian mission to the UN alleged that the Ukrainians want to cause "what they believe to be a minor accident", consisting of a radiation leak, which could see Russia accused of "nuclear terrorism".

The letter denied that Russian troops are storing weapons on site. It repeated an allegation that the Ukrainians had been shelling the plant.

According to a senior US Defence official quoted by Reuters news agency, the package will also contain mine-resistant vehicles for the first time.

Ukraine has been heavily dependent on weapon supplies from its Western allies to assist its resistance against the Russian invasion.