Putin boasted that Russian weapons were valued for their "reliability, quality"

•Putin said expanded bilateral relations would "conform with the interests of the two countries".

•Kim said the Russia-North Korea friendship "forged in the anti-Japanese war" had been "consolidated and developed century after century". 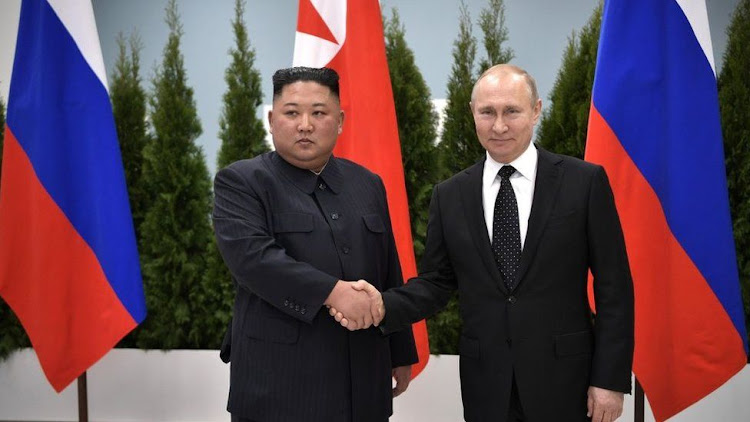 In a letter sent to his counterpart Kim Jong-un on Pyongyang's liberation day, Mr Putin said the move would be in both countries' interests.

In turn, Mr Kim said friendship between both nations had been forged in World War Two with victory over Japan.

He added that their "comradely friendship" would grow stronger.

The Soviet Union was once a major communist ally of North Korea, offering economic co-operation, cultural exchanges and aid.

According to North Korean state news agency KCNA, Mr Putin said expanded bilateral relations would "conform with the interests of the two countries".

In his letter, Mr Kim said the Russia-North Korea friendship "forged in the anti-Japanese war" had been "consolidated and developed century after century".

It added "strategic and tactical co-operation, support and solidarity" between the two countries "had been put on a new high stage, in the common front for frustrating the hostile forces' military threat and provocation".

Pyongyang did not identify the hostile forces by name, but the term has been used repeatedly by North Korea to refer to the US and its allies.

Speaking at an arms show near Moscow on Monday, President Putin said: "We are ready to offer allies and partners the most modern types of weapons - from small arms to armoured vehicles and artillery, combat aircraft and unmanned aerial vehicles."

He boasted that Russian weapons were valued for their "reliability, quality" and said "almost all of them have been used in real combat operations more than once".

Russia's invasion of Ukraine on 24 February has proven costly for the Russian military, however, despite its advanced weapons such as cruise missiles. The smaller Ukrainian forces have less firepower, but that includes various Western weapons, which have inflicted heavy losses.

In July, North Korea was one of the few countries that officially recognised two Russian-backed separatist "people's republics" in eastern Ukraine, after Russia signed a decree declaring them as independent. In retaliation, Ukraine cut off all diplomatic ties with Pyongyang.

Russian forces are still trying to consolidate their grip on the Donetsk and Luhansk regions, against fierce Ukrainian resistance.

Many of North Korea's Russian-designed weapons are old, from the Soviet era. But it has missiles similar to Russian ones.

He also said Pyongyang was keen to get replacement parts for Soviet-era heavy equipment delivered to its factories and power plants from eastern Ukraine. He said Slovyansk and Kramatorsk - cities still held by Ukrainian forces - were major centres for that equipment.

Russian-North Korean relations declined after the Soviet Union's collapse in 1991, but gradually picked up as Russia's relations with the West soured in recent years.

Our government will serve everyone equally - Ruto

August back to school to boost diaspora remittances – WorldRemit

Family and friends living abroad seen to maintain their  support to those back at home.
Business
1 month ago
“WATCH: The latest videos from the Star”
Post a comment
WATCH: The latest news from around the World
by BBC NEWS None
World
16 August 2022 - 00:59
Read The E-Paper