No independent journalists have been allowed to attend the gatheringClick to edit the tertiary title.

•Mullah Haibatullah was said to have addressed a large gathering of around 3,000 religious scholars convened to discuss issues of "national unity".

•No independent journalists have been allowed to attend the gathering, which has taken place amid tight security. 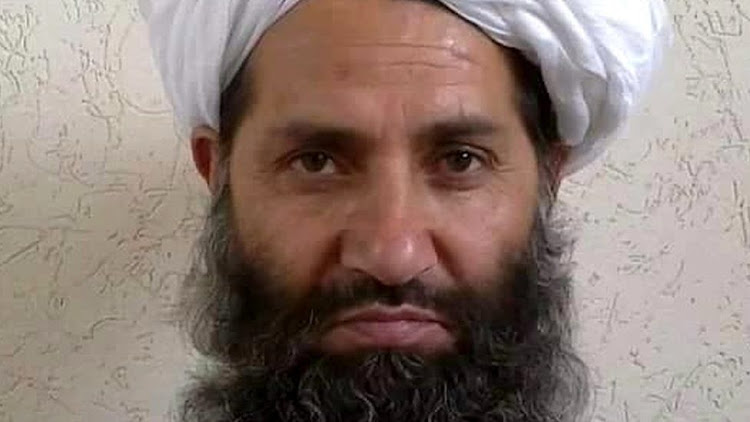 The Taliban's secretive leader, Mullah Haibatullah Akhundzada, has made his first visit to the Afghan capital Kabul, according to Taliban officials.

Mullah Haibatullah was said to have addressed a large gathering of around 3,000 religious scholars convened to discuss issues of "national unity".

No independent journalists have been allowed to attend the gathering, which has taken place amid tight security.

Audio of his speech was broadcast.

Though, no video or photographs of Mullah Haibatullah have been published.

Loud cheers could be heard as his presence was announced.

There have been persistent allegations made by critics of the Taliban that Mullah Haibatullah in fact died a number of years ago, though multiple sources have told the BBC that this is not the case.

In his speech Mullah Haibatullah praised the Taliban takeover of Afghanistan last year, as "not only a source of pride for Afghans but also for Muslims all over the world".

He also appeared to address continuing international criticism of the Taliban's treatment of women, on issues such as recent rules instructing them to wear the face veil in public.

"Thank God, we are now an independent country. [Foreigners] should not give us their orders, it is our system and we have our own decisions," he said, according to state-run Bakhtar News Agency.

"We have a relationship of devotion to one God, we cannot accept the orders of others which God does not like."

So far there has been no significant discussion on girls' education at the gathering, and girls' secondary schools remain closed in most of the country.

Women have not been allowed to attend the event.

Another senior Taliban figure earlier said: "The women are our mothers, sisters, we respect them a lot, when their sons are in the gathering it means they are also involved, in a way, in the gathering."

Afghan women's rights activists have reacted with anger and dismay.

A number of men and women spoken to by the BBC Afghan Service dismissed the conference as "unrepresentative," and an attempt by the Taliban to legitimise their rule.

"They only gathered to close people's mouths," said one man from southern Helmand province.

Baran is a young woman from Kabul who's been banned from attending school.

She said: "It was a gathering of like-minded people. This is not my word… this is what everybody thinks and says.

"As a woman, I am so disappointed. They do not value us as human beings.

With foreign development aid largely cut off and some banking sanctions imposed since the Taliban took power last year, the country remains mired in a deep economic and humanitarian crisis.

Shorter-term humanitarian aid via the UN and charities has continued to flow in, but Mullah Haibatullah called on Afghan traders to return to the country and build the economy in order to avoid dependence on "foreign funds."

On Thursday, gunfire was heard in the vicinity of the gathering.

The Taliban have faced guerrilla attacks by both the Islamic State group and "resistance" groups linked to the previous government.

Taliban officials played down the incident, though video circulated of a number of alleged gunmen killed by their security forces.

On Friday there were reports of a number of rockets being fired close to the venue of Mullah Haibatullah's address in Kabul, though no casualties were reported.