For months, the clinic's staff and volunteers had braced for a worst-case scenario.

•During a press conference Friday afternoon, the clinic's owner and director confirmed they are opening a new location in Las Cruces, New Mexico.

•Shannon Brewer, the Pink House's executive director, was in New Mexico getting ready for the clinic opening when the Supreme Court ruled. 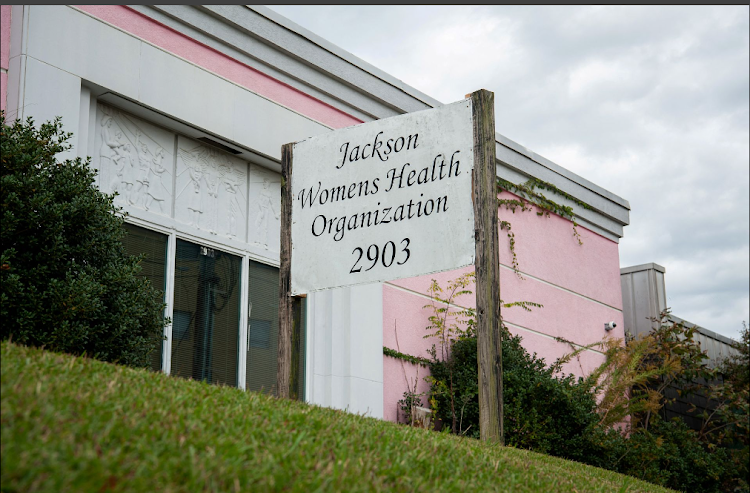 "They ruled against Roe. Abortion is now illegal!" a protester yelled outside Mississippi's only abortion clinic on Friday as word trickled out that the U.S. Supreme Court had overturned its landmark 1973 Roe v. Wade ruling.

Jackson Women's Health Organization, nicknamed the Pink House for its bubblegum-colored exterior, was thrust into the center of the country's legal battle over abortion rights after the high court agreed to hear Mississippi's challenge to Roe.

For months, the clinic's staff and volunteers had braced for a worst-case scenario. An end to federal protections for abortion would trigger Mississippi's abortion ban and shut down the clinic.

The staff learned on Friday that the clinic could remain open for 10 more days until the state's trigger law took effect.

A group of volunteer escorts in rainbow vests, some who have helped guard the clinic for nearly a decade, quickly got back to work trying to keep protestors from blocking the driveway as dozens of patients arrived for their appointments.

"'Stand there, hold your ground,'" Derenda Hancock, a lead clinic escort, said she told her group.

Tensions outside the clinic grew. The escorts blasted Tom Petty's "I Won't Back Down" on repeat, trying to drown out the protesters shouting through bullhorns. A police car circled the block. A girl wept as she tucked a bouquet of flowers into the clinic's fence.

Flustered patients leaving the clinic sped out of the parking lot, sometimes nearly hitting the protesters who shouted "love your little baby" and pressed religious literature up to their car windows.

David Lane, a pastor who has protested outside the Pink House for years, told a woman driving up to the clinic that she could not get an abortion. As the patient drove away, a clinic escort yelled at him for spreading false information.

"The reaction naturally is one of not elation, but gratitude," said Lane, 78, of the Supreme Court's ruling.

Once the Pink House closed, he said, he planned to start driving to North Carolina and Kansas to protest at clinics there.

Cindy Janecke, a 58-year-old disaster recovery worker from New Orleans, walked up to the clinic in tears. She and her husband had been driving through town on a road trip when she learned Roe was overturned, and she said she wanted to tell the staff how much she valued their work.

"It's a different day," clinic escort Kim Gibson said. "We can't let it be the last. We've got to do something."

During a press conference Friday afternoon, the clinic's owner and director confirmed they are opening a new location in Las Cruces, New Mexico, which they have dubbed "Pink House West."

It should be ready for patients in the next few weeks, owner Diane Derzis said, and will be one of the closest abortion clinics to Mississippi once the Jackson location closes.

Shannon Brewer, the Pink House's executive director, was in New Mexico getting ready for the clinic opening when the Supreme Court ruled. Joining the press conference through Zoom, she choked up as she thanked the Jackson staff.

"We have been preparing, but nothing can really prepare you for the actual day that it comes down," Brewer said. "We're still here, we're still fighting, we're just fighting in a different place."

After the decision, half of US states are expected to introduce new restrictions or bans.
News
5 months ago

Protests are under way in cities across the US.
News
5 months ago

Half of US states are expected to introduce new restrictions or bans.
News
5 months ago
WATCH: The latest videos from the Star
Post a comment
WATCH: The latest news from around the World
by REUTERS Reuters
World
25 June 2022 - 14:43
Read The E-Paper