US ban on imports from China's Xinjiang region takes effect

According to the US Congress, China has detained more than a million Uyghurs and other Muslim minorities in Xinjiang since April 2017. 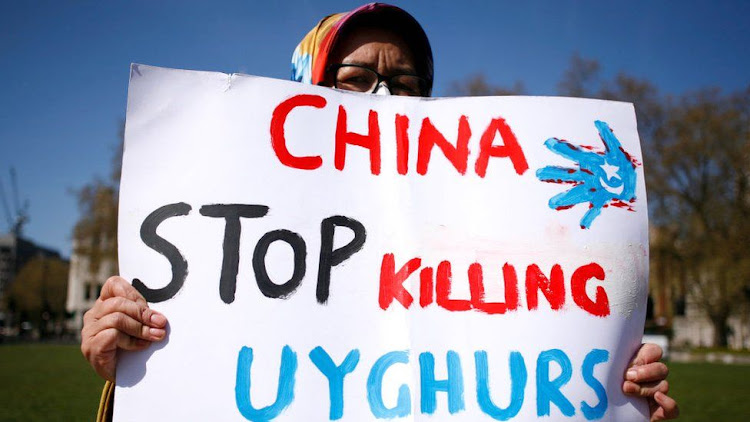 Members of the Uyghur community at a protest in London
Image: BBC/GETTY IMAGES

Tough new US regulations on the import of goods from the Xinjiang region of China have come into effect.

Under the rules, firms have to prove imports from the region are not produced using forced labour.

US officials have said members of the minority Uyghur community in the region, who are predominantly Muslim, have been detained and made to work.

China has repeatedly rejected accusations that it is holding Uyghurs in internment camps in Xinjiang.

Several imports from the resource-rich region, including cotton and tomatoes, have already been banned from the US.

The restrictions will be extended to all imports under the Uyghur Forced Labor Prevention Act (UFLPA), which took effect on Tuesday.

In a statement late last week, US lawmakers said the law sends "a clear message that we will no longer remain complicit in the Chinese Communist Party's use of slave labour and egregious crimes against humanity".

"Congress stands ready to work with President Biden and his administration to ensure this historic law is fully and rigorously implemented," US Republican Senator Marco Rubio, Democrat Senator Jeff Merkley and two other lawmakers said.

According to the US Congress, China has detained more than a million Uyghurs and other Muslim minorities in Xinjiang since April 2017.

It believes tens of thousands of detainees have worked "at a fraction of minimum wage or without any compensation" in Xinjiang and other provinces "under the guise of poverty alleviation and industrial aid programmes".

It said China also "interferes with audits and traditional due diligence efforts to vet goods and supply chains in Xinjiang... including by intimidating potential witnesses and concealing relevant information".

China has denied the use of forced labour and said the camps in Xinjiang were "re-education" facilities used to combat terrorism.

But leaked files and first-hand accounts from inside the camps, which were obtained by the BBC, have detailed an organised system of mass rape, sexual abuse and torture of ethnic minorities.

Human rights groups have also accused the Chinese government of gradually stripping away the religious and other freedoms of Uyghurs through mass surveillance, detention, indoctrination and even forced sterilisation.

What does it mean for brands?

Scott Nova, executive director of the independent Workers Rights Consortium in Washington DC, said the UFLPA "will likely substantially reduce the practice of forced labour in Xinjiang" by "eliminating a large part of the market" for its goods.

"A crucial question is whether brands selling goods in the US will try to take advantage of the weaker protections in other consumer markets by directing goods with content from Xinjiang to those markets," Mr Nova said.

"Our coalition will be working to identify and publicly expose any brands and retailers that engage in this practice," he added.

Laura Murphy, a human rights professor at Sheffield Hallam University in the UK, said the European Union (EU) should impose a similar import ban on goods from Xinjiang.

"I think that citizens of the EU would be shocked to know that a ban on products known to be made with forced labour does not already exist," Prof Murphy said.

"But the EU also needs to be a leader in passing mandatory human rights due diligence. Both these tools are necessary to ensure that companies address the forced labour and other abuses in their supply chains," she added.

Japanese retailers Uniqlo and Muji are among brands that have been scrutinised over materials from Xinjiang.

In January last year, the US blocked a shipment of Uniqlo men's shirts over concerns that it violated a ban on cotton products from the region.

Responding to a query from the BBC last week, a Uniqlo spokesperson did not state whether or not the brand uses cotton from Xinjiang.

"We continue to work with [US officials] to implement measures for the smooth importation of our products, and are awaiting new guidelines scheduled for release on 21 June," the spokesperson said.

Meanwhile, Japanese retailer Muji has been criticised for launching a collection of Oxford shirts "made of organic cotton delicately and wholly handpicked in Xinjiang" in 2019.

"In our business activities, we comply with the laws and regulations of each country and region, and we are taking all necessary steps to respect human rights and labour standards," the spokesperson said.

Early last year, the administration of former US President Donald Trump announced a ban on cotton and tomato products from Xinjiang.

The wider-reaching UFLPA was approved by the Senate last July, and Congress in December. It was subsequently signed into law by current US President Joe Biden.

From Tuesday, US Customs and Border Protection officials will stop all shipments from Xinjiang that arrive at American ports.

Cargo will be stopped from entering the country unless the importer can "prove by clear and convincing evidence that the goods were not produced with forced labour," the US Department of Homeland Security said.

Nio says it immediately started an investigation into the incident
News
3 days ago
WATCH: The latest news from around the World
by BBC NEWS None
World
24 June 2022 - 14:45