War escalates between Ukraine and Russia.

• Members of the bloc are expected to decide whether to award "candidate status" to Kyiv later this week.

• The move would begin the process of Ukraine's accession to the alliance, which could take years to complete. 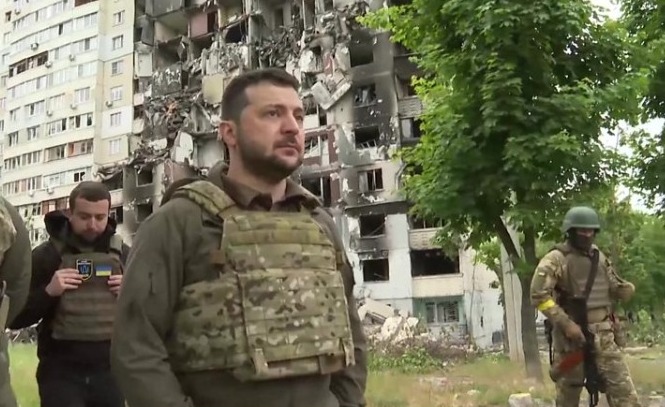 Ukraine's President Volodymyr Zelensky has warned Russia will intensify its attacks on his country in the coming days, as Kyiv awaits news on its bid to join the EU.

Members of the bloc are expected to decide whether to award "candidate status" to Kyiv later this week.

The move would begin the process of Ukraine's accession to the alliance, which could take years to complete.

But Mr Zelensky warned the decision could see Russia step up its attacks.

Speaking during his nightly address from Kyiv, the Ukrainian leader said he and his advisers expect "greater hostile activity" from Moscow, but told citizens that his forces "are preparing" and are ready for any renewed assault.

He pledged to push forward with what he called Ukraine's "historic" ambitions to join the EU, which were endorsed by the bloc's executive, the European Commission, last week.

But now the decision rests with the European Council, a body made up of the leaders of Member States, which will meet at a summit in Brussels on Thursday and Friday.

"I think it is obvious to everyone that since 1991 there have been few such fateful decisions for Ukraine as we expect now," Mr Zelensky said, referencing the year Ukraine declared independence from the Soviet Union. "And I am convinced that only a positive decision meets the interests of the whole of Europe."

Kyiv applied to join the EU just four days after Russia launched its invasion on 24 February.

On Friday, Russian leader Vladimir Putin said he has "nothing against" Ukraine's ambitions to join the alliance, but his spokesperson Dmitry Peskov warned that any move towards accession would require "increased attention" on Moscow's part.

"We all know about the intensification of discussions in Europe on the strengthening of the defence component of the EU," Mr Peskov said. "The military, defence and security components are being discussed, and all kinds of transformations are happening there, and we are, of course, observing it all thoroughly."

And Mr Zelensky warned other EU members that they too could expect retaliation from Moscow in the coming days.

"Obviously, we should expect greater hostile activity from Russia," he said. "And not only against Ukraine, but also against other European countries."

The Ukrainian leader's warning comes amid an ongoing Russian assault in the east of Ukraine. Moscow's forces in the region have been attempting to take complete control of the Donbas, parts of which were already held by pro-Russian separatists prior to the outbreak of the conflict.

Much of the fighting has been concentrated around the city of Severodonetsk, which Luhansk Governor Serhiy Gaidai told state TV Russia now controlled "the main part" of.

The UK defense ministry said on Sunday that despite both Russia and Ukraine conducting heavy artillery bombardments on axes to the north, east and south of the city, there has been very little change to positions on the front line.

Meanwhile, the head of Nato has warned that the conflict in Ukraine could turn into a protracted conflict.

"We must prepare for the fact that it could take years," Secretary General Jens Stoltenberg told the German newspaper Bild on Saturday.

But he emphasized that the West must not let up in its support for Kyiv and warned that if Russian President Vladimir Putin should reach his objectives in Ukraine the world "would have to pay an even greater price".

His comments were echoed by British Prime Minister Boris Johnson, who on Sunday accused Mr Putin of resorting to a "campaign of attrition" and "trying to grind down Ukraine by sheer brutality".

"I'm afraid we need to steel ourselves for a long war," he wrote. "Time is the vital factor. Everything will depend on whether Ukraine can strengthen its ability to defend its soil faster than Russia can renew its capacity to attack."