Scientists have for the first time found microplastics in freshly fallen Antarctic snow.

•Scientists have for the first time found microplastics in freshly fallen Antarctic snow. 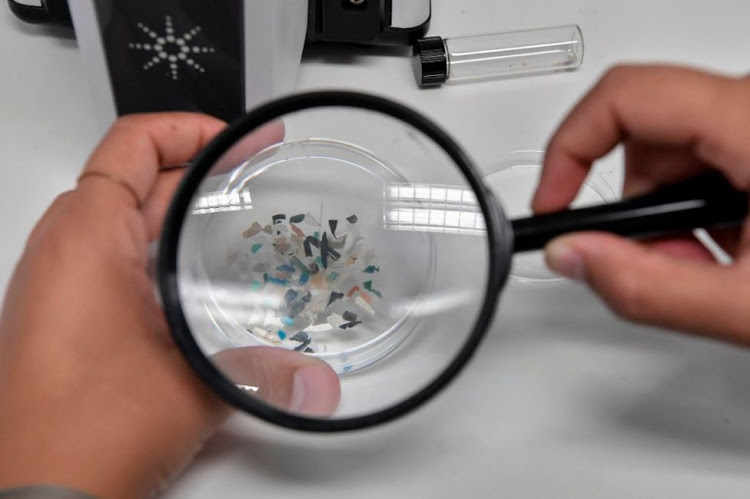 Microplastics seen under a magnifying glass

Scientists have for the first time found microplastics in freshly fallen Antarctic snow.

Researchers from the University of Canterbury in New Zealand collected samples from 19 sites in Antarctica and each contained tiny plastic fragments.

Microplastics stem from the erosion of plastic materials and are smaller than a grain of rice - sometimes even invisible to the naked eye.

The researchers found an average of 29 particles per litre of melted snow.

They identified 13 different types of plastics and the most common was polyethylene terephthalate (PET), mostly used in soft-drink bottles and clothing. This was found in 79% of the samples.

Where did they come from?

"The most likely source of these airborne microplastics is local scientific research stations," researcher Alex Aves wrote in the journal, Cryosphere.

Previous studies have found microplastic pollution in Antarctic sea ice and surface water, but this is the first reported case in fresh snow.

A major study published in the Proceedings of the National Academy of Sciences last year said microplastics are spiralling across the globe, often transported by dusts, wind and ocean currents.

In 2020, researchers found microplastics near the summit of Mount Everest. They have also been found in deep oceans.

Why is the new find worrying?

This form of pollution can have both local and wider effects.

"Microplastics can have harmful substances stuck on to their surfaces such as heavy metals, algae," says Laura Revell, associate professor at Canterbury University, who was also involved in the research.

"So they can provide a way in which harmful species can make it into some remote and sensitive areas, that otherwise wouldn't get there."

Not much research has been done on their impact on human health, but one study by the Hull York Medical School and the University of Hull last year found that high levels of ingested microplastics in the human body have the potential to cause harmful effects, including cell death and allergic reactions.

Microplastics may also be increasing the impact of global warming.

Snowfields, ice caps and glaciers around the world are already melting fast, and scientists say dark-coloured microplastics deposited at these locations can make things worse by absorbing sunlight and enhancing local heating.

Fast-melting glaciers on mountain ranges in different parts of the world are increasingly becoming hazards, leading to landslides and avalanches and causing glacial lakes to burst their banks.

The rapid thinning and retreat of glaciers also poses a threat to water supplies and agriculture in mountain regions around the world.

Community networks are a way to help address the digital divide.
News
3 months ago

In October 2016, President Kenyatta directed scrapping of the fee, a move that was meant to lower project costs
News
3 months ago

Kenya has a total of 36,280 savanna elephants, becoming the fourth largest population in the world.
News
3 months ago

NRT had been linked to extrajudicial killings, disappearances, theft of land and denial of access to grazing zones.
Counties
3 months ago

PPB told Star they have not received an application to allow the jab in Kenya.
News
3 months ago

No cure exists, but medication and management strategies may temporarily improve symptoms.
News
3 months ago

Sex workers: We do it for our children

It is delicious with bacon and honey, and a warm or cold beverage of choice.
Sasa
3 months ago

It is a super simple cocktail that is refreshing and perfect for a chilled weekend with friends.
Sasa
3 months ago

They are like emoji’s and can convey emotions without needing to type words.
Sasa
3 months ago

Lentils do not require pre-boiling but can be soaked in order to reduce cooking time by about half.
Sasa
3 months ago
Post a comment
WATCH: The latest news from around the World
by BBC NEWS None
World
12 June 2022 - 10:32
Read The E-Paper