The airport was cleared at 05:50 BST as passengers queued at check in and security.

•The airport was cleared at 05:50 BST as passengers queued at check in and security.

•Hundreds of people have missed flights at the airport over the last three months due to check-in delays as a result of staff shortages. 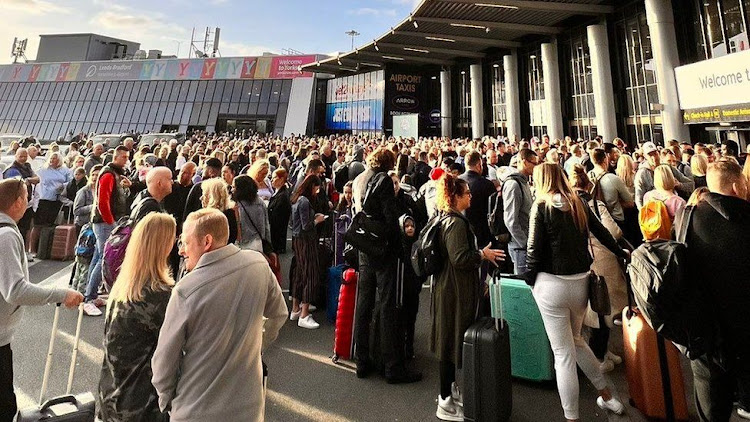 The airport said passengers were evacuated in line with safety protocols.
Image: BBC

Travellers at Leeds Bradford Airport missed flights after hundreds of people were evacuated due to a fire alarm.

The airport was cleared at 05:50 BST as passengers queued at check in and security.

Most airlines delayed flights during the disruption, the airport said, but a "small number" had departed leaving a "minimal number" of people behind.

Passengers and staff were asked to wait at the front of airport, but were allowed back into the building after around 30 minutes.

One passenger Tweeted it was "absolute carnage" and said "on top of the already long check-in" everyone had to go through security again.

The airport said all passengers were back through security by 07:40 BST and normal operations had resumed.

A spokesperson said: "Leeds Bradford Airport (LBA) was evacuated this morning due to an unplanned fire alarm.

"We are investigating the cause of the alarm.

"LBA staff returned the terminal to normal operations rapidly after the incident."

Hundreds of people have missed flights at the airport over the last three months due to check-in delays as a result of staff shortages.

The spokesperson said queues were being managed on a day-to-day basis and that "any passengers remaining in the queue one hour before prior to departure were brought forward for priority security clearance".

The airport said it continued to advise people to arrive and join the security queue at the time advised by their airline, but no earlier than three hours before departure.

Kenya is strategically placed and has all the resources and manpower to easily increase its tourism revenues.
Opinion
2 months ago

It was not immediately clear why the protesters had targeted the plane.
News
2 months ago
WATCH: The latest news from around the World
by BBC NEWS None
World
27 May 2022 - 17:19