14 students, teacher killed in attack at US primary school

The 18-year-old gunman killed 14 students and one teacher at Robb Elementary School.

•The 18-year-old gunman killed 14 students and one teacher at Robb Elementary School in the city of Uvalde.

•The governor said the suspect was armed with a handgun and possibly a rifle in the attack. Students have been evacuated to a local community centre
Image: REUTERS

Fifteen people have died in a shooting at a primary school in Texas, says Governor Greg Abbott.

The 18-year-old gunman killed 14 students and one teacher at Robb Elementary School in the city of Uvalde.

The governor said the suspect was armed with a handgun and possibly a rifle in the attack.

Governor Abbott says the suspect is deceased, and it is believed that responding officers killed him.

The public were asked to stay away as police investigate the crime scene.

Shootings at primary schools, where pupils range in age from five to 11, are still relatively rare.

The attack on Tuesday comes amid a national rise in gun violence.

Governor Abbott identified the attacker as a local teenager, Salvador Ramos, who he said "shot and killed, horrifically, incomprehensibly, 14 students and killed a teacher".

"He himself is deceased, and it is believed that responding officers killed him," he added.

"It is believed that two responding officers were struck by rounds, but have no serious injuries."

The gunman may have also shot his grandmother at the beginning of the shooting rampage, according to local US media. He may have been a local high school student, according to CBS, the BBC's partner in the US. 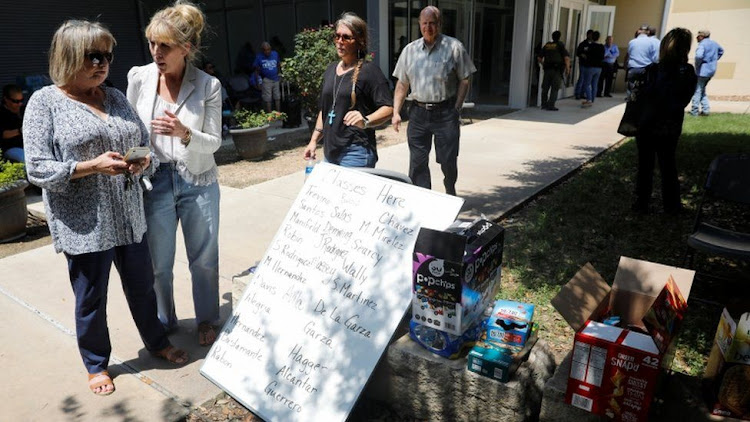 The Uvalde Consolidated Independent School District - around 85 miles (135km) west of the city of San Antonio - told the BBC that students had been evacuated from the school. Just under 500 pupils are enrolled in the school.

Local hospitals disclosed that students from the school were being treated by emergency services.

A 66-year-old woman and a 10-year old girl are being treated at a hospital in San Antonio, and are both in a critical condition, University Health hospital officials say.

The Uvalde Memorial Hospital posted on Facebook that 13 children had been taken to hospital "via ambulances or buses".

Two "individuals" were dead when they arrived at hospital, the Facebook post said earlier. They are now planing to hold an "emergency blood drive" on Wednesday.

The FBI is aiding in the investigation, according to CBS.

US President Joe Biden has been briefed on the attack, White House officials said, and is expected to deliver remarks later on Tuesday.

The last day of classes for students in the school district was scheduled for Thursday. Seniors at the local high school in Uvalde, a community of about 16,000 residents, are due to graduate on Friday.

School shootings have become recurring emergencies in the US, with 26 recorded last year, according to EdWeek, an education trade publication.

Active shooter lockdown drills are a common part of the school curriculum, from primary to high school.

The 2012 shooting at Sandy Hook Elementary School in Connecticut shocked Americans. Twenty of the 26 victims in that attack, which was carried out by a 20-year-old, were between the ages of five and six.

Speaking on the floor of the US Senate in Washington DC on Tuesday, Connecticut Democratic Senator Chris Murphy accused his colleagues of complacency and begged them to pass gun control legislation.

"What are we doing? Why are you here? If not to solve a problem as existential as this? This isn't inevitable," he said.

"These kids weren't unlucky. This only happens in this country. Nowhere else do kids go to school and think they might be shot that day."

The National Rifle Association, the powerful lobby group that opposes gun control regulations, will hold its annual conference in the Texan city of Houston on Friday.

A 2020 report from the US Government Accountability Office found that about two-thirds of all school shootings happen at the high school level, and that shootings in elementary schools are most commonly accidental.

Guns overtook car crashes to become the leading cause of death for US children and teenagers in 2020, according to data released by the Centers for Disease Control and Prevention (CDC) last month.

On Monday, an FBI report found that "active shooter" rampage attacks have doubled since the coronavirus began in 2020.