Mr Morrison kept his seat, but many of his party allies lost theirs.

•After his personal unpopularity dominated the campaign, Mr Morrison led his Liberal-National government to a significant election defeat in Saturday's general election.

•Mr Morrison kept his seat, but many of his party allies lost theirs. 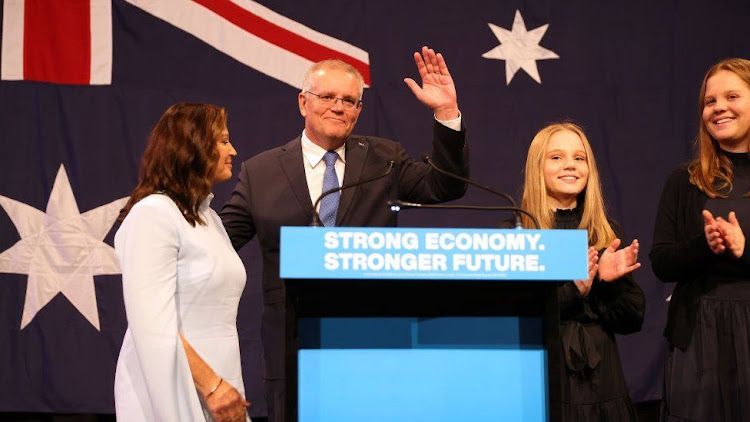 Scott Morrison has conceded election defeat and stepped down as party leader after four years in the job
Image: BBC

Three years after a "miracle" victory, Scott Morrison's tenure as Australian Prime Minister and coalition leader is over.

After his personal unpopularity dominated the campaign, Mr Morrison led his Liberal-National government to a significant election defeat in Saturday's general election.

Mr Morrison kept his seat, but many of his party allies lost theirs.

Speaking after calling rival Anthony Albanese to concede defeat, Mr Morrison said he accepted responsibility for the government's losses - and its wins - and would step down as leader.

But Mr Morrison - nicknamed ScoMo - wasn't always considered a liability, building a reputation a survivor and a shrewd political tactician before he ascended to the top job in 2018.

Rise to the top

The son of a police officer, Scott Morrison grew up in Sydney's beachside suburbs and now represents a traditional heartland in the city's south.

The 53-year-old has worked hard to forge an image as the proverbial family man who understands Australia's suburban values, often donning high-vis vests and a cap featuring his favourite rugby league team.

One of the country's leading religious conservatives, he is now closely connected to the Pentecostal movement. He married his wife Jenny when he was 21 and they have two children.

Mr Morrison has always been politically engaged and was a former state director for the Liberal Party. But he also held senior roles in tourism - he was a former managing director of Tourism Australia - before running for federal office in 2007 and finally entering the cut-throat political stage in Canberra.

He rose to national prominence for vigorously enforcing Australia's controversial approach to asylum seekers, including the Stop the Boats policy, as immigration minister in Tony Abbott's government.

Despite trenchant public criticism of the policy, Mr Morrison pushed on with his severe approach to the portfolio and built a reputation as a tough operator. He remained unfazed by specific accusations about the lack of transparency over what was happening in Australia's offshore detention centres.

He later took on portfolios in social security and treasury - where he was lauded for his competence, work ethic and clear communication.

He opposed the marriage equality bill but kept a low profile during that debate - he ultimately abstained, a sign of his characteristic pragmatic approach to his political career.

Mr Morrison entered the top job in 2018 after his predecessor, Malcolm Turnbull, was forced out by infighting within the government.

Scott Morrison is the first Australian prime minister in 15 years to have served a full three-year term.

His government's stewardship of the economy was at the heart of his re-election bid, with economic activity surpassing pre-pandemic levels and projected to grow a further 4.25% this year. Unemployment levels also dipped to 4% in 2022 - a rate unseen since 2008.

Australia's response to the Covid-19 pandemic - incredibly tight border controls, movement restrictions and free vaccinations - earned it the nickname Fortress Australia. But it now has one of the lowest death rates globally, although the federal government shares credit for this with state governments.

Mr Morrison negotiated a landmark defence pact with the US and the UK in 2021, called Aukus. The agreement - widely seen as a joint effort to counter China's growing military might - re-aligns Australia more closely with the US.

But his tenure has been frequently controversial, including over Aukus, which caused a diplomatic spat when he reneged on an earlier $37bn (£27bn) submarine deal with France.

The result was a bitter rift between Australia and France, culminating with French President Emmanuel Macron accusing Mr Morrison of lying to him. "I don't think - I know," the president famously told reporters.

Other rows - particularly within Mr Morrison's own party - saw many calling his character into question.

Government senator Concetta Fierravanti-Wells launched a blistering attack on Mr Morrison in March, accusing him of being "an autocrat" and "a bully with no moral compass" over internal party processes.

And a leaked text message from Barnaby Joyce - written before he became Mr Morrison's deputy prime minister - labelled the leader a "hypocrite and a liar". Mr Joyce also wrote that he had "never trusted him".

A separate text exchange, reportedly between a party colleague and former New South Wales Premier Gladys Berejiklian, was also leaked to the media. Ms Berejiklian was said to have labelled the prime minister "a horrible person" who was untrustworthy. Ms Berejiklian later said she did not recall sending the message, but did not deny writing it.

During Australia's deadly Black Summer bushfires of 2019-20, the prime minister encountered a severe backlash when he went on a poorly timed family holiday to Hawaii.

News of the trip - which his office initially tried to avoid making public - forced Mr Morrison to cut the trip short and issue an apology.

"I get it that people would have been upset to know that I was holidaying with my family while their families were under great stress," he said.

The prime minister didn't fare much better when floods ravaged large parts of Queensland and New South Wales in March, drawing accusations of responding too slowly to declare a national emergency.

The fire and flood events - two of Australia's worst-ever natural disasters - again raised public anger over the government's climate targets, which are among the weakest set by rich nations.

Mr Morrison's government has also drawn fire for its treatment of women. Most prominently a former Liberal staffer, Brittany Higgins, alleged that a colleague had raped her in a ministerial office in 2018, and that the party had pressured her to stay silent.

It led to a landmark report that found a third of employees in Australia's federal parliament had been sexually harassed.

With the Liberals suffering a considerable swing against them in many parts of the country and losing seats previously considered to be party heartland, his successor, Anthony Albanese, has a huge job ahead of him.

Mr Morrison on Saturday night said the loss was "humbling", but the Liberal-National MPs, staff and their supporters could hold their head high having made Australia stronger over the past nine years.

Despite the "disappointing night", Mr Morrison bowed out with a similar refrain: "Three years ago I stood before you, and I said I believed in miracles. I still believe in miracles."