She was shot while covering an Israeli raid in the occupied West Bank.

• Al Jazeera accused Israeli forces of assassinating Abu Aqla "in cold blood" and called for them to be held accountable for the "intentional targeting and killing of a journalist". 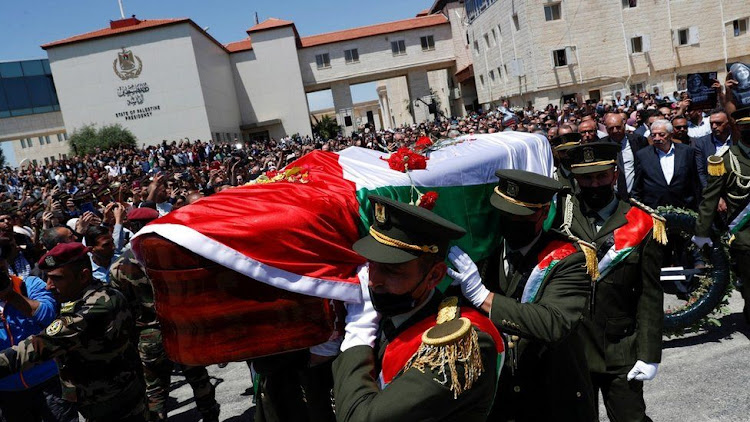 Thousands of Palestinians turned out in Ramallah for an official remembrance service
Image: EPA

The Palestinian president says he will immediately refer the killing of Al Jazeera journalist Shireen Abu Aqla to the International Criminal Court (ICC).

In a speech at a remembrance service attended by thousands of people, Mahmoud Abbas declared that Israel was "fully responsible" for her death.

She was shot while covering an Israeli raid in the occupied West Bank.

Al Jazeera said Abu Aqla was killed by Israeli troops. Israel said she might have been shot by Palestinian gunmen.

The United Nations, United States and European Union have called for an independent and transparent investigation.

Abu Aqla, 51-year-old Palestinian-American, was one of the region's most experienced and well-loved correspondents. She had reported on the Israeli-Palestinian conflict for Al Jazeera's Arabic news channel for two decades.

On Thursday morning, her coffin, draped in the Palestinian flag, was brought to the Palestinian Authority's headquarters in Ramallah. Crowds of mourners lined the streets of the West Bank city as the motorcade passed by.

President Abbas paid tribute to Abu Aqla, describing her as a "martyr of the free word" who "sacrificed her life" to defend the Palestinian cause.

"We hold the Israeli occupation authorities fully responsible for her killing and they will not be able to conceal the truth with this crime," he said.

He added that the PA had rejected an Israeli offer of a joint investigation "because we don't trust them" and that it would "go immediately to the International Criminal Court in order to track down the criminals".

There was no immediate response from the ICC or the Israeli government, which does not recognise the court's authority and has refused to co-operate with an investigation into possible war crimes in the occupied territories. 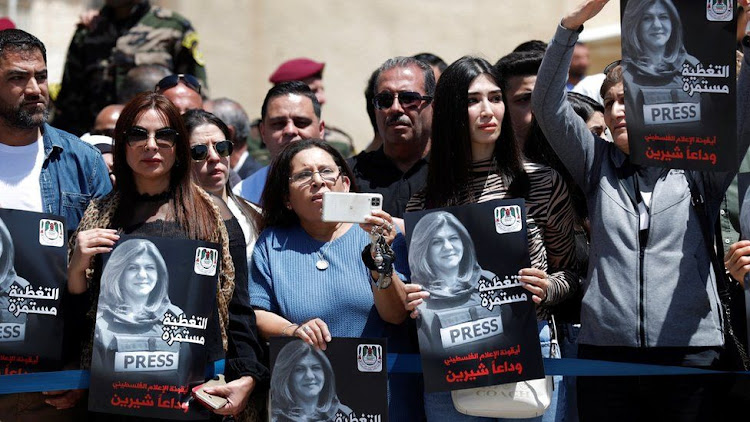 Abu Aqla was wearing a blue flak jacket, clearly marked with the word "Press", when she went to the Jenin refugee camp early on Wednesday to report on a raid by Israeli soldiers and security forces.

The Israeli military said the operation was conducted to apprehend "terrorist suspects".

"During the activity, tens of Palestinian gunmen fired at and hurled explosive devices toward the soldiers. The soldiers responded with fire toward the gunmen and hits were identified," it added.

The Palestinian health ministry said Abu Aqla was hit in the head by a live bullet during the raid. She was taken to hospital in a critical condition and later pronounced dead.

Samoudi told the BBC from hospital that no Palestinian gunmen were nearby when they were hit.

"The bullets came from the area where the [Israeli] soldiers [were deployed]," he said. "The Israelis don't want [journalists to] cover the situation in the Jenin camp." 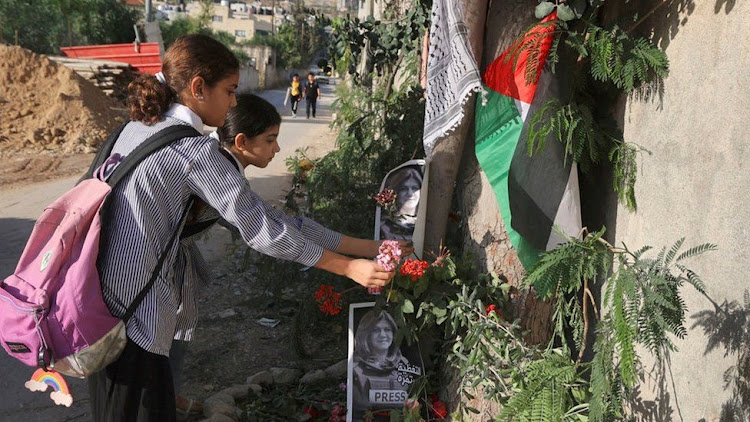 Palestinian schoolgirls laid flowers at the site in Jenin where Abu Aqla was shot
Image: AFP

Al Jazeera accused Israeli forces of assassinating Abu Aqla "in cold blood" and called for them to be held accountable for the "intentional targeting and killing of a journalist".

Israeli Prime Minister Naftali Bennett said it appeared "likely that armed Palestinians... were responsible for the unfortunate death of the journalist".

However, Defence Minister Benny Gantz later told a briefing that it could have been "the Palestinians who shot her" or "tragically, it may be our side".

"Our initial findings from the investigation so far cannot indicate what gunfire was directed at Shireen, and I cannot exclude any option because of the operational chaos on the ground," he said.

The Israeli military stepped up raids on Jenin following a wave of attacks by Israeli Arabs and Palestinians on the streets of Israel and the West Bank in recent weeks that has left 17 Israelis and two Ukrainians dead.

Dozens of Palestinians have been killed - including assailants shot dead while carrying out attacks, or militants and civilians killed during Israeli raids and confrontations.

Four of the Palestinians who carried out attacks in Israel came from the Jenin district.

Akleh was shot in the head while covering a raid on Jenin Refugee Camp.
News
1 week ago

The US also condemned the killing and called her a "reporting legend".
News
1 week ago
WATCH: The latest news from around the World
by BBC NEWS None
World
12 May 2022 - 16:23