Democrats bid for federal abortion law fails in the Senate

Some conservative critics say this would effectively legalise abortion.

•Some conservative critics say this would effectively legalise abortion for all nine months of pregnancy.

•All Republicans and one Democrat have opposed it in the evenly divided Senate, where ties are broken by a vote from the vice-president. 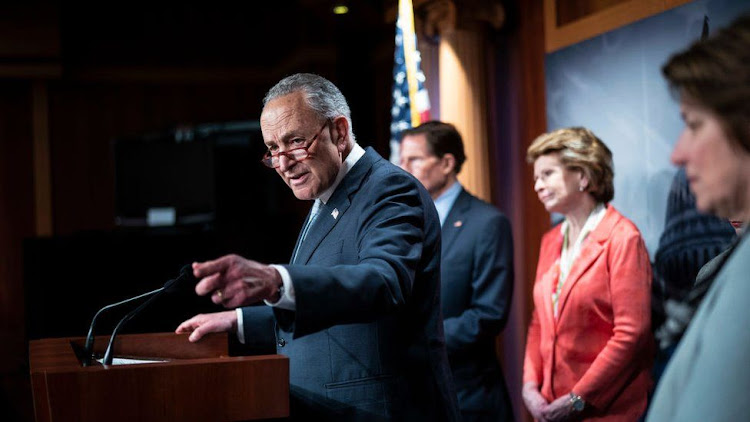 US Senate Democrats have failed to pass a bill to make the right to abortion a federal law, as the nation's top court is poised to curtail it.

The move, meant to counter the Supreme Court's expected ruling that abortions can be banned, was seen as doomed from the start.

The Democrat-led House passed the bill, but it failed 49-51 in the Senate.

Votes were closely watched as abortion emerges as a flashpoint ahead of this year's midterm elections.

"Sadly, the Senate failed to stand in defense of a woman's right to make decisions over her own body," Vice-President Kamala Harris, a Democrat, said outside the Senate chamber following the vote.

Despite the heightened scrutiny, it appeared to be business-as-usual in the Senate. Vice-President Harris presided over the vote in the mostly-empty chamber as Senators gradually filed in to cast their votes.

Wednesday's vote comes as the Supreme Court's nine justices are due to meet for the first time since a draft ruling on abortion rights was leaked last week.

The document suggested the court will overturn Roe v Wade, the 1973 ruling that granted women a constitutional right to abortion.

The leaked document, in which conservative Justice Samuel Alito wrote that Roe was "egregiously wrong", incited a political earthquake and demonstrations - either in protest or celebration - on both sides of the abortion debate.

The draft opinion would not result in a nationwide ban on the procedure, but would allow states to bar abortion outright.

Ahead of the vote, a cluster of House Democrats - mostly women - walked across the Capitol to the Senate, chanting "my body, my decision" as a sign of support for the now failed legislation.

The bill before the Senate today, called the Women's Health Protection Act, went beyond simply making Roe v Wade a law. It would also bar states from enacting restrictions deemed "medically unnecessary", such as mandatory waiting periods and regulations on abortion clinics.

The law aimed most of its protections for the procedure before the point of foetal viability - approximately 24 weeks into a pregnancy. But it also prohibited bans beyond that time, when "in the good-faith medical judgment of the treating health care provider, continuation of the pregnancy would pose a risk to the pregnant patient's life or health".

Some conservative critics say this would effectively legalise abortion for all nine months of pregnancy.

All Republicans and one Democrat have opposed it in the evenly divided Senate, where ties are broken by a vote from the vice-president.

A similar bill failed in February.

However, putting it up for a vote forces senators to go on the record on abortion - a political manoeuvre Democrats hope can place pressure on Republicans ahead of elections in November.

"The vote we just took makes crystal clear the contrast between parties as we approach the mid-terms," said Democratic Senate Majority Leader Chuck Schumer on Wednesday.

Before the vote, Senator Ben Sasse, a Republican from Nebraska, argued that lawmakers should promote an "ethic of life", focusing on more support for mothers, rather than on abortion.

His comments followed that of Senator Patrick J Leahy of Vermont, the Senate's most senior Democrat, who called it "ludicrous" that a majority-male body would weigh in on women's reproductive health.

"Here we are today, a body of 100, 76% of which are male, making decisions about the private lives of the nearly 168 million women in this country," he said.

Polls suggest most Americans support at least some access to the procedure.

According to a March 2021 survey from the Pew Research Center, 61% of Americans say abortion should be legal in all or most circumstances.

Two Republican senators - Susan Collins of Maine and Lisa Murkowski of Alaska - who have said they support some access to abortion are under particular scrutiny, and Ms Murkowski is facing re-election in November. They have said they will not support the bill.