Bodies of 44 civilians found as battle for Izyum rages

Russia seized control of Izyum on 1 April and troops have occupied the city since.

• The five-storey building collapsed in March as residents hid in the basement from Russian shelling.

• But rescuers have only just been able to reach the building, one local official told the BBC. 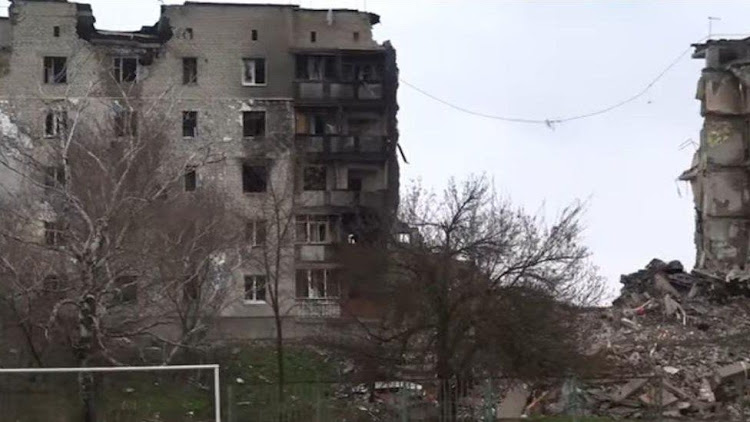 The city's mayor has confirmed that the bodies of 44 civilians were pulled from the rubble
Image: MAKSIM STRELNIK/BBC

Bodies of 44 civilians have been found in the rubble of a collapsed building in the Ukrainian city of Izyum as the battle for control of the area rages.

The five-storey building collapsed in March as residents hid in the basement from Russian shelling.

But rescuers have only just been able to reach the building, one local official told the BBC.

And there are fears the death toll could rise further, as another building in the same street was also targeted.

"We know there were people in there as well. The search work is continuing and I think we will know more numbers of victims soon," Izyum mayor Valeriy Marchenko told the BBC.

Russia seized control of Izyum on 1 April and troops have occupied the city since.

Mr Marchenko said when the buildings were attacked, Russian troops had seized control of half of the city.

As troops tried to advance, they fired directly at the building where the bodies have now been retrieved.

Rescuers only been able to reach it now because the apartment block was in an occupied area of the city.

"It only became possible a couple of days ago for our State Emergency Service to get there and start taking apart the rubble," he said.

There is no special equipment to clear the rubble with everything done manually. Those taking part in the clearance effort are only able to do so when the shelling stops, according to Kharkiv regional governor Oleh Synyehubov.

Izyum, known as the gateway to the Donbas, is part of Ukraine's old coal and steel-producing region and a key city for the Russian military.

However officials say Ukrainian troops are making gains in the region and stopping any further Russian advances.

Mr Synyehubov told the BBC that Russian forces "are not currently conducting active offensive actions because they [Ukrainian forces] are defending".

He added that they were failing to move forward to other targets away from the city.

A report by the Institute for the Study of War confirmed this.

"Russian forces did not make any confirmed advances to the southeast or southwest of Izyum on May 9," the report said, adding that they are likely to resume offensive operations in the coming days.

Those who have escaped Izyum have told of living in basements for months and seeing dead bodies in the streets. Communication with those still inside the city has been cut off.

"There is no city centre anymore. It was so nice there before. All the tall buildings are destroyed," a woman who gave her name as Elena told the BBC.

"There was no single day without shelling," she said.