The Ministry of Defence - which shared pictures of the soldiers - described them as "the despicable 10".

Russia's President Vladimir Putin gave the brigade an honorary title - recognising what he says was "mass heroism and valour, tenacity and courage" - on its return home. 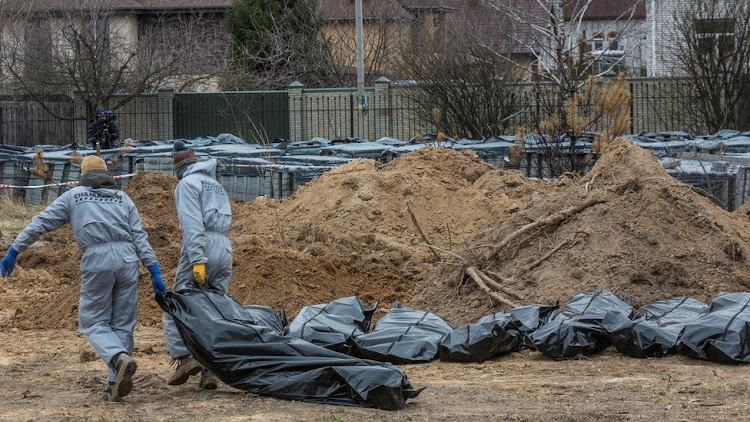 Ukraine has launched a hunt for 10 Russian soldiers accused of war crimes in Bucha - the town outside of the capital Kyiv where civilians were tortured, raped and murdered.

The Ministry of Defence - which shared pictures of the soldiers - described them as "the despicable 10".

Prosecutors say they are being investigated for "premeditated murder".

They are also accused of holding innocent civilians hostage, beating them and looting homes.

Moscow has denied any crimes were committed in Bucha, which was under the control of the 64th motorised infantry brigade for more than a month at the start of the war.

Russia's President Vladimir Putin gave the brigade an honorary title - recognising what he says was "mass heroism and valour, tenacity and courage" - on its return home.

But in the time the brigade controlled Bucha, hundreds were killed. A mass grave was discovered at the church after the town's liberation, while bodies had been left lining the streets where they fell. Thousands of war crimes were documented by investigators.

One of those who survived, Vitaliy Zhyvotovskyi, recalled the screams he heard to news agency AFP.

"We had no hope," he said, remembering how they used to tremble "not because of the cold, but due to fear because we could hear what the Russians did to the captives".

On Thursday, Ukraine's prosecutor general Iryna Venediktova announced they had identified the 10 suspects in particular, sharing pictures of the young men.

In a Facebook post, she explained they "are suspected of cruel treatment of civilians and other violations of laws and customs of war".

"The suspects will be declared wanted in order to detain them and bring them to justice," the statement added, appealing for any other information.

Will they ever face trial?

Stephen Wilkinson, the manager of the Diakonia International Humanitarian Law Centre in Sweden, points out that the chance of a successful prosecution is quite low if they are in Russia.

However, the 64th motorised infantry brigade is now back Ukraine, having moved east to Izium - on the frontline of the battle for the Donbas region. According to reports, it has suffered heavy losses.

If the 10 are still with the brigade - and still alive - it is not impossible they will be found and tried.

Indeed, back in 2014, Ukraine successfully prosecuted two Russian soldiers for "terrorism" after they were captured in the east. They were later handed back to Russia in a prisoner exchange.

"Domestic prosecutions are often the best and quickest way," Mr Wilkinson adds, despite the focus on international mechanisms such as the International Criminal Court in the Hague.

The fact they are "foot soldiers" rather than commanders may also make prosecution easier, Mr Wilkinson says - although "that doesn't remove the need to look into criminal responsibility of the commanders".

Media caption,Watch: UN chief stands outside destroyed buildings near Kyiv, calling the war "an absurdity in the 21st century"

However, there are elements of the Ukrainians fight for justice which have raised some cause for concern for Mr Wilkinson. In particular, the way the photos have been distributed online.

"Even if you know there is strong evidence, the law states innocent until proven guilty. What about a free and fair trial? There is a lot of emotion behind this. I would say it puts it at risk, although doesn't fundamentally undermine it."

It has also emerged that an earlier list of the brigade released by Ukrainian authorities may have included a number of names of people from Tajikistan who were no longer serving in the unit.

"It is not known how many Tajiks in the brigade were in Ukraine, but eight Tajiks, whose names were mentioned in the list, and their relatives claim that they were not there," Radio Liberty's Tajik Service Ozodi said.

Antonio Guterres said the UN Security Council had failed to prevent or end the war in Ukraine.
News
3 months ago

European Commission has accused Russia of blackmail after Moscow cut off gas exports to Poland and Bulgaria.
News
3 months ago
WATCH: Latest videos on Russia Ukraine war
by BBC NEWS None
World
29 April 2022 - 16:30