The second fatality was a female relative of the first case.

•The infection confirmed last week was a new "spillover event", a transmission from an infected animal.

•The second fatality was a female relative of the first case. 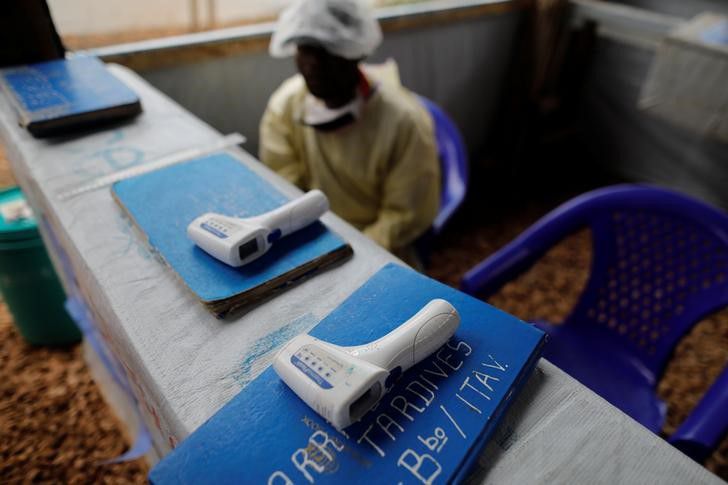 Thermometers are pictured at the entrance of an Ebola Treatment Centre in the Eastern Congolese town of Butembo in the Democratic Republic of Congo, October 4, 2019.
Image: REUTERS

A second Ebola patient has died in northwestern Democratic Republic of Congo, the World Health Organization said on Tuesday, days after a fresh outbreak of the deadly disease emerged.

Genetic testing showed an infection confirmed last week was a new "spillover event", a transmission from an infected animal, and not linked to the last outbreak, which was declared over in December, the World Health Organization said on Monday on Twitter.

The second fatality was a female relative of the first case, a WHO spokesperson told Reuters.

The first patient began showing symptoms on April 5, but did not seek treatment for more than a week. He was admitted to an Ebola treatment centre in Mbandaka, the capital of Congo's Equateur province, on April 21 and died later that day. read more

Congo has seen 13 previous outbreaks of Ebola, including one in 2018-2020 in the east that killed nearly 2,300 people, the second highest toll recorded in the history of the hemorrhagic fever.

Diallo is the former CEO of RBM Partnership to End Malaria.
News
5 months ago

Unep moves to stop another pandemic

Some diseases including Covid-19, Ebola, and HIV were caused by pathogens originating from animals
News
6 months ago
Post a comment
WATCH: The latest news from around the World
by REUTERS Reuters
World
26 April 2022 - 09:46
Read The E-Paper