• The highly contagious but less deadly BA.2 sub-variant of Omicron has pushed the figures to greater highs in recent weeks in countries 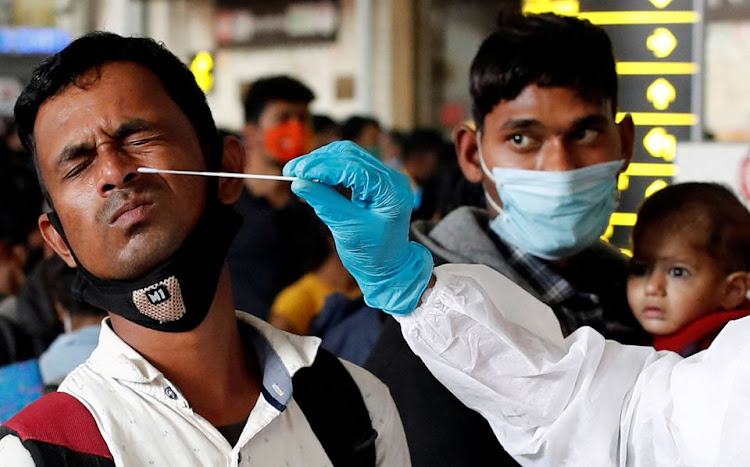 A man reacts as a health worker collects a swab sample during a rapid antigen testing campaign for coronavirus disease (COVID-19), at a railway station in Mumbai, India, January 13, 2022.
Image: REUTERS

Coronavirus infections in Asia passed 100 million on Wednesday, according to a Reuters tally, as the region records a resurgence in cases, dominated by the BA.2 Omicron sub-variant.

The region is reporting over 1 million new COVID-19 cases about every two days, according to a Reuters analysis. With more than half of the world's population, Asia contributes 21% of all reported COVID-19 cases.

The highly contagious but less deadly BA.2 sub-variant of Omicron has pushed the figures to greater highs in recent weeks in countries such as South Korea, China and Vietnam. BA.2 now represents nearly 86% of all sequenced cases, according to the World Health Organization.

South Korea leads the world in the daily average number of new cases reported, accounting for one in every four infections reported globally each day, as per Reuters analysis.

While the number of cases has levelled off since earlier in March, the country is still reporting over 300 deaths on average each day, with authorities ordering crematoriums nationwide to operate longer. read more

China is trying to tame its worst outbreak since the pandemic began. The rise in COVID cases in Shanghai, fuelled by the BA.2 substrain, has prompted the financial hub to go into lockdown. The city moved into a two-staged lockdown of its 26 million residents on Monday, restricting movement through bridges and highways to contain the spread. read more

China has reported over 45,000 new cases since the start of this year, a figure higher than it reported in all of 2021. Even though China has inoculated 90% of its population, not enough elderly people have received booster doses, making them susceptible to reinfections. read more

Though China is sticking to its plan for crushing the outbreak, experts overseas remain sceptical about the efficacy of lockdowns in the face of the highly infectious Omicron variant.

"It is clear from Australia and elsewhere in the world that lockdowns are simply not effective against Omicron – so expect a big wave coming," said Adrian Esterman, an expert in biostatistics at the University of South Australia. read more

India alone accounts for 43 million COVID cases, more than the total in the next three worst-hit Asian countries of Japan, South Korea and Vietnam.

India has reported fewer than 2,000 cases per day for the past 11 days versus its peak this year in January of over 300,000 cases on average per day.

They will also drop requirements to wear masks outdoors and allow larger groups to gather.
News
8 months ago

What you need to know about the coronavirus right now