•Despite a sharp decline, the CDC has strongly recommended that children over the age of 5 inoculated.

•Last week a study showed Pfizer/BioNTech vaccine was less effective at preventing infection in children aged 5 to 11 than in older kids but still cut hospitalizations by about 50%. 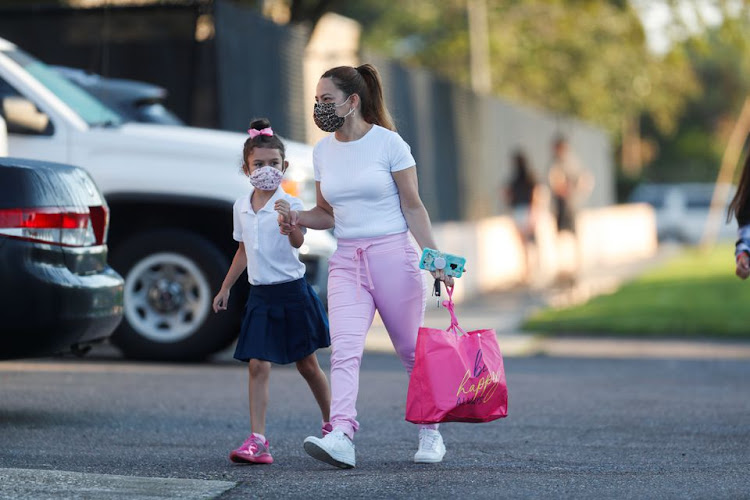 A mother walks her daughter on the first day of school, amid the coronavirus (COVID-19) pandemic, at West Tampa Elementary School in Tampa, Florida, U.S., August 10, 2021
Image: REUTERS

Florida's top health official said on Monday the state would recommend against the COVID-19 vaccine for healthy children, breaking with guidance from the U.S. Centers for Disease Control and Prevention.

In announcing the move during press briefing convened by Florida Governor Ron DeSantis, the state's surgeon general Dr. Joseph Lapado cited studies that showed few COVID fatalities among healthy children and elevated risk among young boys receiving the vaccine of side effects such as myocarditis.

"The Florida Department of Health is going to be first state to officially recommend against the use of COVID 19 vaccines for healthy children," Lapado said during the more than 90-minute panel discussion.

Last week, a study based on New York state health records suggested that the Pfizer/BioNTech vaccine was less effective at preventing infection in children aged 5 to 11 than in older kids but still cut hospitalizations by about 50%. read more

A U.S. Centers for Disease Control and Prevention report released in January found that the vaccine was 91% effective in preventing rare but often serious conditions in children that causes organ inflammation weeks after COVID-19 infections called Multisystem Inflammatory Syndrome in Children in 12-18 year olds.

The CDC has strongly recommended that parents have children over the age of 5 inoculated, despite a sharp decline in infections and hospitalizations nationwide since a winter peak in January and evidence that it has been less effective against the Omicron variant.

"It's deeply disturbing that there are politicians peddling conspiracy theories out there and casting doubt on vaccinations when is our best tool against the virus and the best tool to prevent even teenagers from being hospitalized," White House spokeswoman Jen Psaki said in response to Lapado's comments.

DeSantis, a Republican often named as a potential 2024 presidential candidate, has often sparred with Biden, a Democrat, over COVID mandates and restrictions.

The CDC referred Reuters to their existing recommendation.

They peacefully demonstrated from GPO within the Nairobi CBD to the Ministry of Health offices.
InPictures
6 months ago

The regulation stated that NHIF beneficiaries suffering from chronic illnesses such as cancer shall only receive treatment from public health care ...
News
6 months ago

Ministry using vaccines from global stockpile; 12 counties to begin within 2 weeks.
News
6 months ago
Post a comment
WATCH: The latest news from around the World
by REUTERS Reuters
World
08 March 2022 - 09:09
Read The E-Paper