Paralysed man with severed spine walks thanks to implant

So far nine people have received the implant and regained the ability to walk.

•But he can now walk - because of an electrical implant that has been surgically attached to his spine.

•The researchers stress that it isn't a cure for spinal injury and that the technology is still too complicated to be used in everyday life, but hail it nonetheless as a major step to improving quality of life. 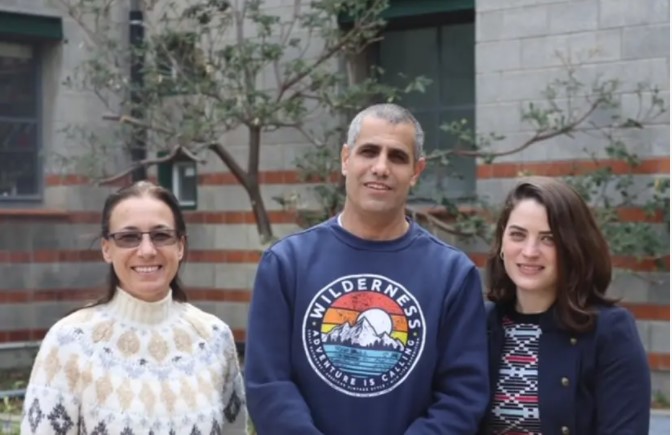 A paralysed man with a severed spinal cord has been able to walk again, thanks to an implant developed by a team of Swiss researchers.

It is the first time someone who has had a complete cut to their spinal cord has been able to walk freely.

The same technology has improved the health of another paralysed patient to the extent that he has been able to become a father.

The research has been published in the journal Nature Medicine.

Michel Roccati was paralysed after a motorbike accident five years ago. His spinal cord was completely severed - and he has no feeling at all in his legs.

But he can now walk - because of an electrical implant that has been surgically attached to his spine.

Someone this injured has never been able to walk like this before.

The researchers stress that it isn't a cure for spinal injury and that the technology is still too complicated to be used in everyday life, but hail it nonetheless as a major step to improving quality of life.

I met Michel at the lab where the implant was created. He told me that the technology "is a gift to me". 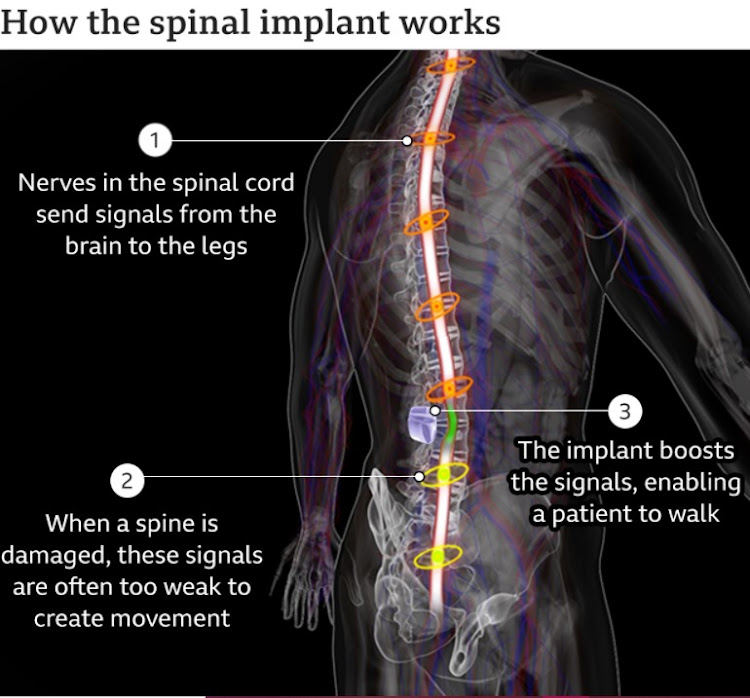 "I stand up, walk where I want to, I can walk the stairs - it's almost a normal life."

It was not the technology alone that drove Michel's recovery. The young Italian has a steely resolve. He told me that from the moment of his accident, he was determined to make as much progress as he could.

"I used to box, run and do fitness training in the gym. But after the accident, I could not do the things that I loved to do, but I did not let my mood go down. I never stopped my rehabilitation. I wanted to solve this problem."

"I was extremely surprised," she told me. "Michel is absolutely incredible. He should be able to use this technology to progress and be better and better." 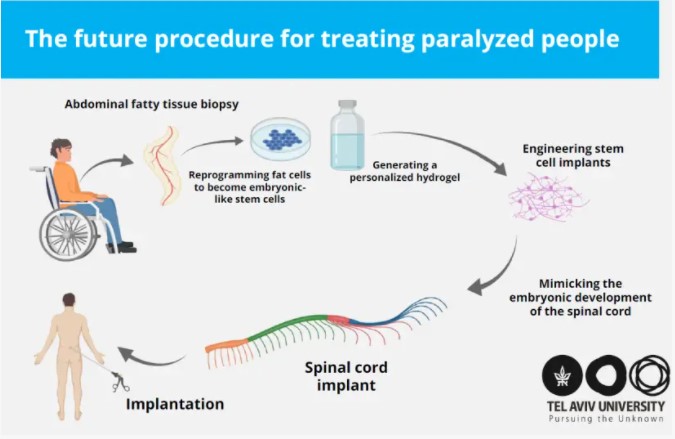 Visualization of the next stage of the research - human spinal cord implants for treating paralysis
Image: (credit: SAGOL CENTER FOR REGENERATIVE BIOTECHNOLOGY)

The research has been backed by Dr Ram Hariharan, a consultant at the Northern General Hospital in Sheffield who is independent of the research team and also speaks for the Spinal Injuries Association.

"They have done something that has not been done before.

"I have not heard of any study where they have put in an implant [into a patient with a complete spinal cord cut] and demonstrated muscle movements and improving balance, enough to stand and walk."

But he added more clinical trials needed to be carried out before he could be convinced that it was an effective treatment.

"We need more numbers [of patients] to show that it is first safe and that it significantly enhances their lives. Only then can it be taken forward."

Nerves in the spinal cord send signals from the brain to the legs. Some people are paralysed when the nerves are damaged through injury.

In Michel's case there's no signal at all to his legs because the spinal cord is completely severed. But the implant sends signals directly to his legs enabling him to walk, but only when the implant is on.

So far nine people have received the implant and regained the ability to walk. None of them use it to help them walk in their everyday lives - because it's too complicated at this stage. Instead, they use it to practice walking - which exercises their muscles, improves their health - and often, restores a little bit of movement.

David M'zee was one of the first patients to receive the implant. Like Michel, he was able to walk with the implant while using a walker. David's health improved to such an extent he has was able to have a baby girl with his partner Janine, something that was not possible after his accident in 2010.

His daughter, Zoe, is now one year old. When I was with them, she raced with her Dad with her baby walker and took great delight in beating him.

"It's really beautiful!" he beamed with fatherly pride.

"It is great fun. It's the first time I have been walking with her in that way - she with her baby walker, I with my walker."

Having a family has given David a huge amount of joy. And the implant has helped him in subtle, but important ways.

"It helps with the hypertension. I had it for so long. At first I didn't realise I had it. I was getting so tired from time to time.

"Once we found out that the implant can increase the blood pressure it was like 'Wow, that's how life can be!'"

"It's these small things that make a big difference," he told me.

There is still a long way to go before the technology can be used routinely to help paralysed people to walk, according to Prof Grégoire Courtine, who led the team that developed the technology at the École Polytechnique Fédérale de Lausanne (EPFL).

"This is not a cure for spinal cord injury. But it is a critical step to improve people's quality of life. We are going to empower people. We are going to give them the ability to stand, to take some steps. It is not enough, but it is a significant improvement."

A cure would require regeneration of the spinal cord, possibly with stem cell therapies, which are still at a very early stage of research. Prof Courtine believes that his implant technology could be used in conjunction with nerve regeneration treatments once they are ready.

Many countries have also experienced disruption to cancer screening and treatment.
News
3 months ago

Covid may soon be detected through an eye test – Study