Tension has been simmering over North Korea's series of six weapons tests in 2022.

• An update to a long-range cruise missile system was tested on Tuesday.

• Last week, North Korea said it would bolster its defences against the United States and consider resuming "all temporally-suspended activities" 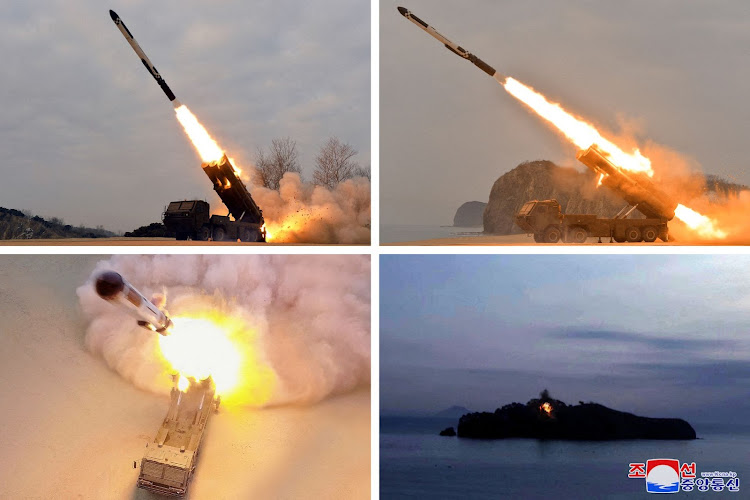 Tension has been simmering over North Korea's series of six weapons tests in 2022, among the largest number of missile launches it has made in a month. The launches have triggered international condemnation and a new sanctions push from the United States.

An update to a long-range cruise missile system was tested on Tuesday, and another test was held to confirm the power of a conventional warhead for a surface-to-surface tactical guided missile on Thursday, KCNA said.

Kim did not attend the tests, but during a visit to the munitions factory, he lauded "leaping progress in producing major weapons" to implement the ruling Workers' Party's decisions made at a meeting last month, a separate dispatch said.

KCNA did not specify the weapons or the factory's location. Kim called for bolstering national defences to tackle an unstable international situation at that party gathering.

Last week, North Korea said it would bolster its defences against the United States and consider resuming "all temporally-suspended activities", hinting at lifting a self-declared moratorium on testing nuclear bombs and intercontinental ballistic missiles (ICBMs).

At the factory, Kim called for "an all-out drive" to produce "powerful cutting-edge arms," and its workers touted his devotion to "smashing ... the challenges of the U.S. imperialists and their vassal forces" seeking to violate their right to self-defence, calling it "the harshest-ever adversity."

Pyongyang has defended missile launches as its sovereign right to self-defence and accused Washington and Seoul of double standards over weapons tests.

No ICBMs or nuclear weapons have been tested in North Korea since 2017 but a spate of short-range ballistic missile (SRBM) launches began amid stalled denuclearisation talks following a failed summit with the United States in 2019.

U.S. Department of Defence Press Secretary John Kirby condemned the latest launches as "destabilising," and called on Pyongyang to "stop these provocations".

The European Union also issued a statement saying the tests posed a threat to international and regional peace and security and undermine efforts to resume dialogue and help the country's people.

Photos released by KCNA showed a thinner-looking Kim wearing a black leather coat and suit in smiles during the factory trip, with the faces of some officials blurred.

Jeffrey Lewis, a missile expert at the U.S.-based James Martin Center for Nonproliferation Studies, said the factory appeared to be the February 11 plant at the Ryongsong Machine Complex in Hamhung, the country's second largest city on its east coast, citing similar double column vertical lathes seen in past KCNA images, although repainted.

The facility seemed to have been remodelled, but a giant metal tube inside a flow forming machine in a new hall where Kim was seen looked like a motor casing for a KN-23 or other SRBM, Lewis said on Twitter.

The two tactical guided missiles tested on Thursday also precisely struck the target and proved the explosive power of their warhead as designed, it said.

KCNA photos also showed a long-range missile launched from a transporter-erector-launcher, gushing flame, before sparking a fire on an island. In other images, a shorter-range missile was seen rising into the sky above a cloud of dust and then hitting an island.

South Korea's Joint Chiefs of Staff (JCS) said it detected both tests, and the short-range missiles travelled for about 190 km (118 miles) to an altitude of 20 km (12.4 miles).

Yang Moo-jin, a professor at the University of North Korean Studies in Seoul, said Pyongyang is likely to ratchet up pressure and possibly fire an ICBM or other powerful weapon when it marks the 80th and 110th anniversaries of the birthdays of Kim's late father and grandfather in February and April, both major holidays in the country.

"The ongoing string of tests should be aimed at highlighting the North's increasingly diverse missile arsenal, and essentially staging a show of force against the United States," he said.