• Putin accused Kyiv of provocation, and sought guarantees against eastward Nato expansion and deployment of offensive weapons close to Russia.

• After Tuesday's video call, US National Security Adviser Jake Sullivan told journalists Washington was preparing specific robust responses in the weeks ahead if they were required. 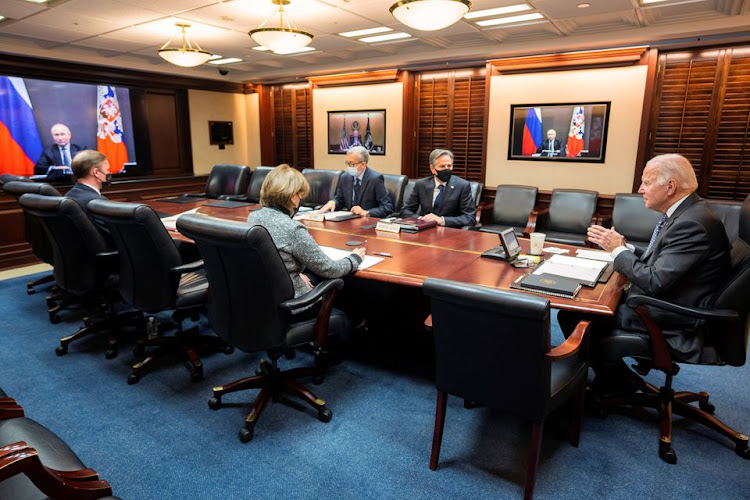 U.S. President Joe Biden holds virtual talks with Russia's President Vladimir Putin amid Western fears that Moscow plans to attack Ukraine, as Secretary of State Antony Blinken listens with other officials during a secure video call from the Situation Room at the White House in Washington, U.S., December 7, 2021. The White House/Handout via REUTERS

The US says it is preparing "robust responses" over fears of a Russian invasion of Ukraine, after President Biden's rare talks with Vladimir Putin.

Russia says it will not attack Ukraine.

Putin accused Kyiv of provocation, and sought guarantees against eastward Nato expansion and deployment of offensive weapons close to Russia.

They were held on a secure video link set up under previous administrations but never used before, Russian news agency Tass said.

Video footage of the opening moments showed friendly greetings between the US and Russian leaders. The talks then continued behind closed doors, lasting about two hours.

Putin held the talks from his residence in the southern resort of Sochi, according to Tass.

After Tuesday's video call, US National Security Adviser Jake Sullivan told journalists Washington was preparing specific robust responses in the weeks ahead if they were required.

"Things we did not do in 2014 we are prepared to do now," he said, referring to Western responses to Russia's annexation of Crimea.

"There was a lot of give and take, there was no finger-wagging, but the president was crystal clear where the United States stands on all of these issues," he added.

The measures included economic sanctions and other actions such as additional troop deployments to Nato allies in the region and defence materiel for Ukraine.

He refused to be drawn on what the economic measures might be, saying the US would prefer to communicate them directly to the Russians.

But he said that Nord Stream 2, a new pipeline to Germany which is not yet in operation, provided "leverage" for the US and its allies.

"If Vladimir Putin wants to see gas flow through that pipeline, he may not want to take the risk of invading Ukraine," he said.

Earlier reports said US officials had reached agreement with Germany to shut down the pipeline in the event of an invasion.

Other possible measures include restrictions on Russia's banks converting roubles into foreign currencies, or even disconnecting Russia from the Swift global financial payment system, reports say.