•Finance is a crucial part of the picture.

•Vulnerable nations are demanding that rich emitters make good on a decade-old promise to provide $100 billion annually to help. 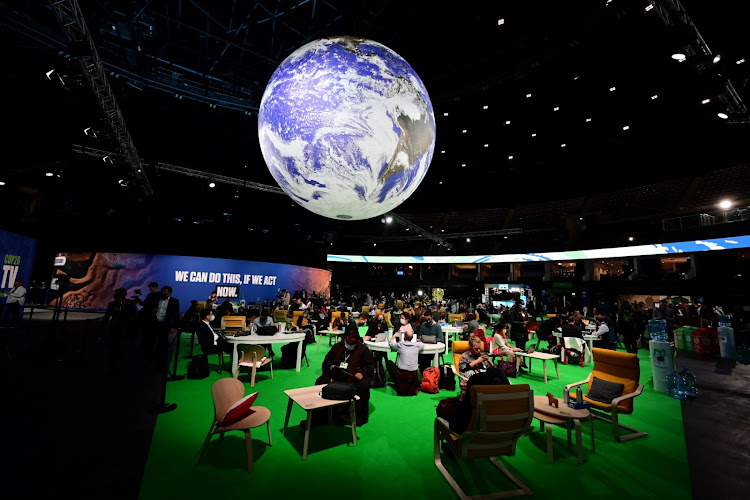 Delegates sit in the Action Zone as they attend the third day of the COP26 UN Climate Summit in Glasgow on November 3, 2021.
Image: AFP

Attention turned Wednesday to how the world will pay for its plan to decarbonise and help vulnerable nations survive climate change, after a world leaders' summit at COP26 that yielded a landmark methane slashing deal.

But a simmering diplomatic spat between the United States, China and Russia over the other's climate ambition showed the fragile nature of talks aimed at averting disastrous global warming.

Negotiators are in Glasgow to try to keep the Paris Agreement temperature goal of 1.5C within reach.

In the six years since the deal, planet-warming greenhouse gas emissions have continued to rise and extreme weather linked to the heating climate have intensified.

Finance is a crucial part of the picture, with vulnerable nations demanding that rich emitters make good on a decade-old promise to provide $100 billion annually to help.

"We know that you've been devastated by the double tragedies of Covid and climate change," he told national representatives at the conference.

"That's why we're going to meet the target of providing $100 billion of climate finance to developing nations."

Sunak, COP26 President Alok Sharma and US Treasury Secretary Janet Yellen on Wednesday all stressed the role that private investors will play in the climate funding plans.

The Glasgow Financial Alliance for Net Zero (GFANZ), made up of more than 450 banks and asset managers, says it represents assets totalling $130 trillion.

"A pool of that capital is being carved out for the transition in emerging economies," said Mark Carney, the former Bank of England governor behind the scheme.

"Right here, right now is where we draw the line," he said at a roundtable event.

"It is where private finance draws the line."

Yet campaigners raised concerns over how private finance is accounted in the international, UN-led climate process, pointing out that investors are still free to fund fossil fuel projects.

"More than $130 trillion and not a single rule to prevent even one dollar from being invested in the expansion of the fossil fuel sector," said Lucie Pinson, executive director of the Reclaim Finance initiative.

"It's worth asking if the GFANZ and its members are actually ready to lead the charge against climate change, given that they are actually slowing down the green energy revolution by keeping afloat the polluting fossil fuel industry."

Finance is fundamental for developing countries, who say they cannot afford the green transition taking place in richer nations.

Countries that have already suffered economic losses from supercharged storms or crop failures due to climate change are also desperate for separate "loss and damage" cash to help them recover.

Delegations will spend the next 12 days thrashing out details of the Paris Agreement rulebook, including rules governing carbon markets and a unified "stock take" on emissions cutting plans.

Although organisers say they want COP26 to keep the 1.5C heating limit within reach, the UN says the most up-to-date climate pledges put Earth on course to warm 2.7C.

A string of protests are planned during COP26 to push leaders to deliver.

On Tuesday leaders committed to lower their emissions of methane -- a potent greenhouse gas -- by at least 30 percent this decade.

Experts said the pledge could have a significant impact on short-term global heating.

But a two-day world leaders summit ended with barbed comments from the two largest emitters, the United States and China.

"It just is a gigantic issue and they walked away. How do you do that and claim to be able to have any leadership?" Biden told journalists before flying out of Glasgow.

He said the same was true of Russian President Vladimir Putin, who is also missing the talks.

China hit back on Wednesday, with a foreign ministry spokesman saying: "Actions speak louder than words".

"China's actions in response to climate change are real," he said.

A Kremlin spokesperson said "we disagree" with Biden's assessment.

"We are certainly not minimising the importance of the event in Glasgow, but Russia's actions are consistent and thoughtful and serious," he said.