• Early Tuesday morning the hurricane's center was located above the eastern part of the Matagorda Peninsula, according to the Miami-based observatory. 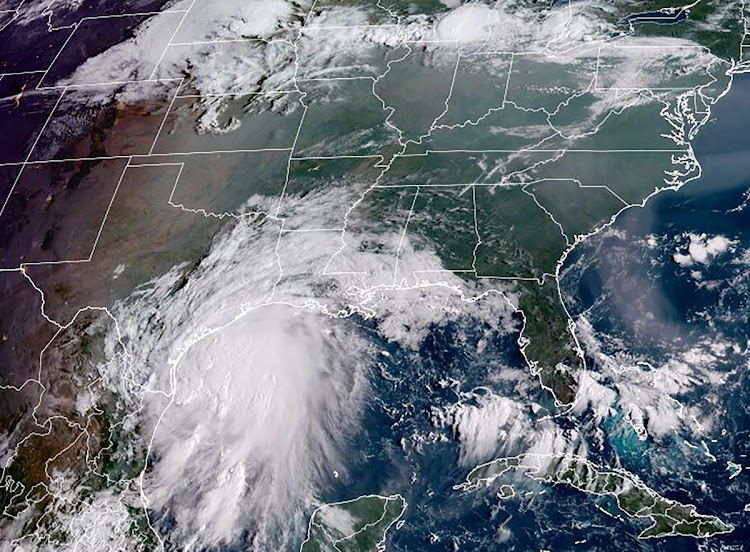 This RAMMB National Oceanic and Atmospheric Administration (NOAA) satellite handout image shows Tropical Storm Nicholas, off the coastline of the US state of Texas at 13H40 UTC on September 13, 2021.
Image: AFP

The storm was packing maximum sustained winds of 75 miles (120 kilometers) per hour, and was expected to dump up to 18 inches (around 460 millimeters) of rain in the Houston area, weather officials said.

The US National Hurricane Center wrote in its latest advisory that the storm landed at around 0530 GMT.

Earlier, the national monitor warned the storm was bringing "heavy rains, strong winds, and storm surges to portions of the central and upper Texas coasts".

Between six and 12 inches of rainfall is expected in parts of Texas and western Louisiana. "This rainfall may produce areas of considerable flash and urban flooding," the center said.

Early Tuesday morning the hurricane's center was located above the eastern part of the Matagorda Peninsula, according to the Miami-based observatory.

The NHC also issued a storm surge warning for much of the Gulf coast, meaning "there is a danger of life-threatening inundation, from rising water moving inland from the coastline."

"This is a life-threatening situation," it said, warning people in the area to "take all necessary actions to protect life and property."

Sylvester Turner, the mayor of Houston -- parts of which were devastated by Hurricane Harvey in 2017 -- said the city was on high alert.

"I urge everyone to be OFF the roads by sun down and to avoid driving tonight through tomorrow as we anticipate heavy rainfall," Turner tweeted.

Ahead of the storm's arrival many flights were canceled at Houston-area airports, and the Houston ship channel at its busy port was closed, said a spokesman for the agency that steers ships through the waterway.

Schools closed Monday afternoon across the storm-affected area and will remain shut on Tuesday, officials said.

Customers rushed to gas stations and supermarkets across the region to fill fuel tanks and stock up on bottled water, toilet paper, and perishables such as milk and eggs.

Texas is no stranger to hurricanes, but scientists warn that climate change is making the storms more powerful, posing an increasing risk to coastal communities.

Coastlines are already suffering from flooding, which has been amplified by rising sea levels.

"It is up to all Texans in the path of this storm to take precautions, heed the guidance of officials, and remain vigilant as this severe weather moves through Texas," he said in a statement.