Coal is the world's dirtiest major fuel, ending its use is seen as a major step.

• The G7 group will promise to move away from coal plants unless they have the technology to capture carbon emissions.

• Leaders of the seven major industrialised nations - the UK, US, Canada, Japan, France, Germany, and Italy. 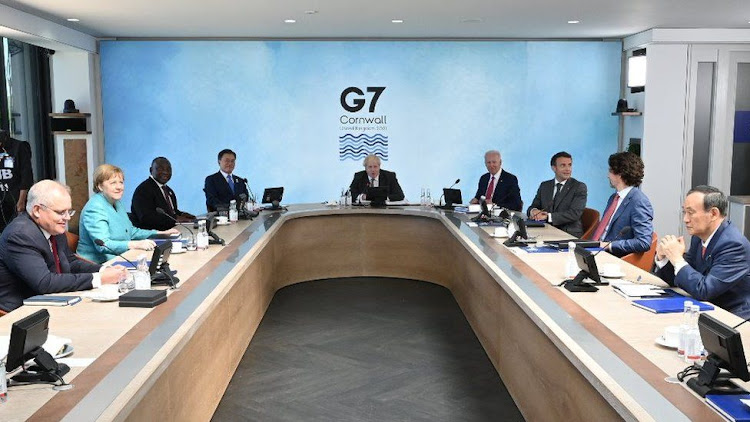 The G7 summit is being held in the resort of Carbis Bay in Cornwall, south-west England
Image: REUTERS

World leaders meeting in Cornwall are to adopt strict measures on coal-fired power stations as part of the battle against climate change.

The G7 group will promise to move away from coal plants unless they have the technology to capture carbon emissions.

It comes as Sir David Attenborough warned that humans could be "on the verge of destabilising the entire planet".

He said G7 leaders faced the most important decisions in human history.

The coal announcement came from the White House, which said it was the first time the leaders of wealthy nations had committed to keeping the projected global temperature rise to 1.5C.

That requires a range of urgent policies, chief among them being phasing out coal-burning unless it includes carbon capture technology.

Coal is the world's dirtiest major fuel and ending its use is seen as a major step by environmentalists, but they also want guarantees rich countries will deliver on previous promises to help poorer nations cope with climate change.

The G7 will end the funding of new coal generation in developing countries and offer up to £2bn ($2.8bn) to stop using the fuel. Climate change has been one of the key themes at the three-day summit in Carbis Bay, Cornwall.

Leaders of the seven major industrialised nations - the UK, US, Canada, Japan, France, Germany, and Italy - are expected to set out plans to reduce emissions from farming, transport, and the making of steel and cement.

They will commit to protecting 30% of global land and marine areas for nature by 2030. They are also expected to pledge to almost halve their emissions by 2030, relative to 2010 levels. The UK has already surpassed that commitment.

Prime Minister Boris Johnson will hold a news conference on Sunday afternoon, the final day of a summit where he has clashed with EU leaders over the Brexit deal's requirements for checks on goods from Britain to Northern Ireland.